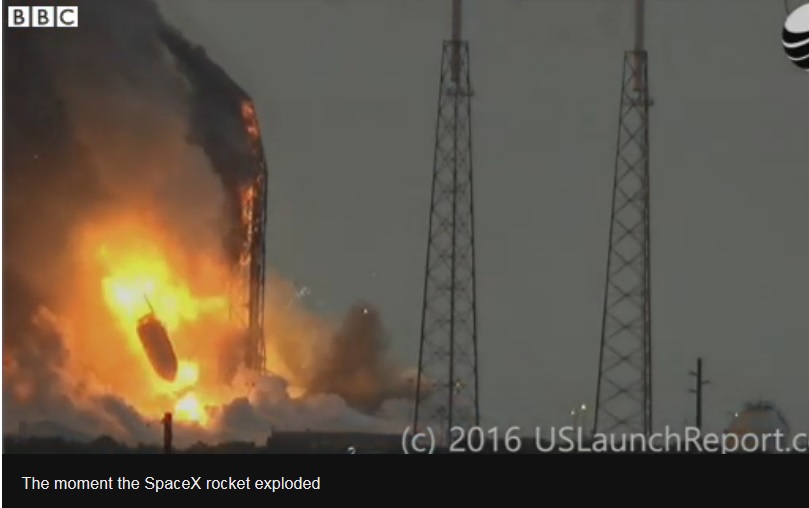 The rocket explosion Thursday that destroyed a Facebook Inc. satellite marks a significant setback to the social media company’s nascent effort to spread internet access to unconnected parts of the world.

The rocket explosion Thursday that destroyed a Facebook Inc. satellite marks a significant setback to the social media company’s nascent effort to spread internet access to unconnected parts of the world.

The satellite, a joint venture between Facebook and French satellite operator Eutelsat Communications SA, was scheduled to launch Saturday aboard a Falcon 9 rocket designed by billionaire entrepreneur Elon Musk’s Space Exploration Technologies Corp. The explosion occurred during a prelaunch test.

The satellite was the first part of Facebook’s Internet.org project to help get billions more people online. Internet.org also aims to lower the price for internet access through different programs.

The satellite would have reached a few hundred thousand people in sub-Saharan Africa, said Tim Farrar, president of TMF Associates Inc., a telecom consulting firm in Menlo Park, Calif. Facebook said it would have reached more than a dozen countries.

“It’s a big, complicated satellite,” said Mr. Farrar, who estimated it cost more than $200 million to build. “It takes hundreds of people at least two years to build.”

The accident caused by one billionaire’s company—Mr. Musk’s SpaceX—is clouding the ambitions of another billionaire: Facebook Chief Executive Mark Zuckerberg.

In a Facebook post from Africa, where he was traveling, Mr. Zuckerberg acknowledged the setback. “I’m deeply disappointed to hear that SpaceX’s launch failure destroyed our satellite that would have provided connectivity to so many entrepreneurs and everyone else across the continent,” he said.

The satellite was a key component of Internet.org’s mission to expand internet access.

In June, Facebook tested a giant solar-powered drone it developed called Aquila. But Aquila, which is designed to fly at 60,000 feet, much higher than commercial aircraft, isn't ready to deploy.

The social networking company formed Internet.org in 2013. At the time, Facebook said it had already spent about $1 billion on infrastructure toward the group’s mission and that it planned to spend more.

Bringing billions of people online in rural areas and developing countries is a huge technical challenge. According to the U.N.’s International Telecommunication Union, 53% of the world’s 7.4 billion people aren’t using the internet.

Facebook’s rival Alphabet Inc., the parent of Google, is testing its own inventions to expand internet access. Its most ambitious plan—dubbed Project Loon—revolves around balloons that float for months between 60,000 feet and 75,000 feet, beaming internet connections to remote areas below.

Alphabet’s research lab, called X, has tested the balloons above Brazil, Indonesia, New Zealand and Australia, and is in talks with telecommunications firms there to help connect residents. It recently unveiled an automated machine in Puerto Rico that can launch a balloon every 30 minutes.

Alphabet is also building and launching small satellites into orbit, but the company says that project—dubbed Terra Bella—is intended to collect images of the earth instead of provide internet connections.

Facebook’s satellite was capable of offering about 20 gigabits of data per second. Typically, satellites offer low amounts of data at a very high cost.

“It was important because it was going to places without connectivity, but it was never going to be anything” on the scale of what traditional terrestrial technologies are capable of providing, Mr. Farrar said.

Providing internet access to the targeted areas via cell towers, for example, isn’t an option, he added.

“We remain committed to our mission of connecting everyone, and we will keep working until everyone has the opportunities this satellite would have provided,” Mr. Zuckerberg said.