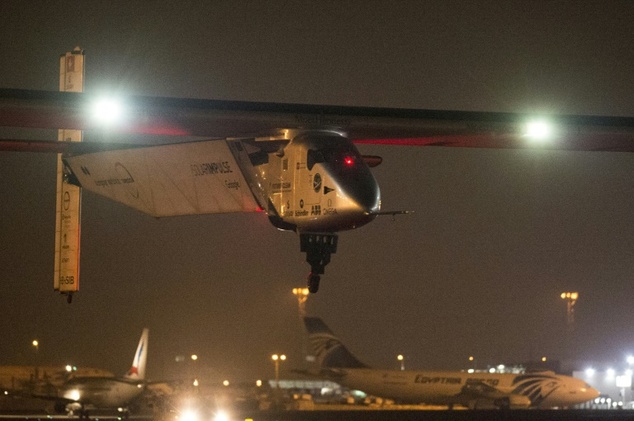 An aircraft powered by solar energy left Egypt on Sunday on the last leg of the first ever fuel-free flight around the globe.

The solar powered Solar Impulse 2 takes off from Cairo International Airport in the Egyptian capital on July 24, 2016 (Photo/AFP)

An aircraft powered by solar energy left Egypt on Sunday on the last leg of the first ever fuel-free flight around the globe.

Solar Impulse 2, a spindly single-seat plane, took off from Cairo in darkness en route to Abu Dhabi, its final destination, with a flight expected to take between 48 and 72 hours.

The plane, which began its journey in Abu Dhabi in March 2015, has been piloted in turns by Swiss aviators Andre Borschberg and Bertrand Piccard in a campaign to build support for clean energy technologies.

"The round the world flight ends in Abu Dhabi, but not the project," Piccard told Reuters a few days before takeoff.

Solar Impulse flies without a drop of fuel, its four engines powered solely by energy collected from more than 17,000 solar cells in its wings. It relies on solar energy collected during the day and stored in batteries for electrical energy to fly at night.

"The project is a big promotion of clean technologies around the world and the legacy of Solar Impulse is the created international community," Piccard said.

Last week, the solar-powered aircraft landed in Egypt for on its penultimate stop. The flight's takeoff from Egypt to the United Arab Emirates was delayed due to a heatwave in Saudi Arabia.

"I started to dream about this project 17 years ago in 1999 when I finished my hot-air balloon landing in Egypt, so 17 years later I take off where the balloon landed," Piccard said.