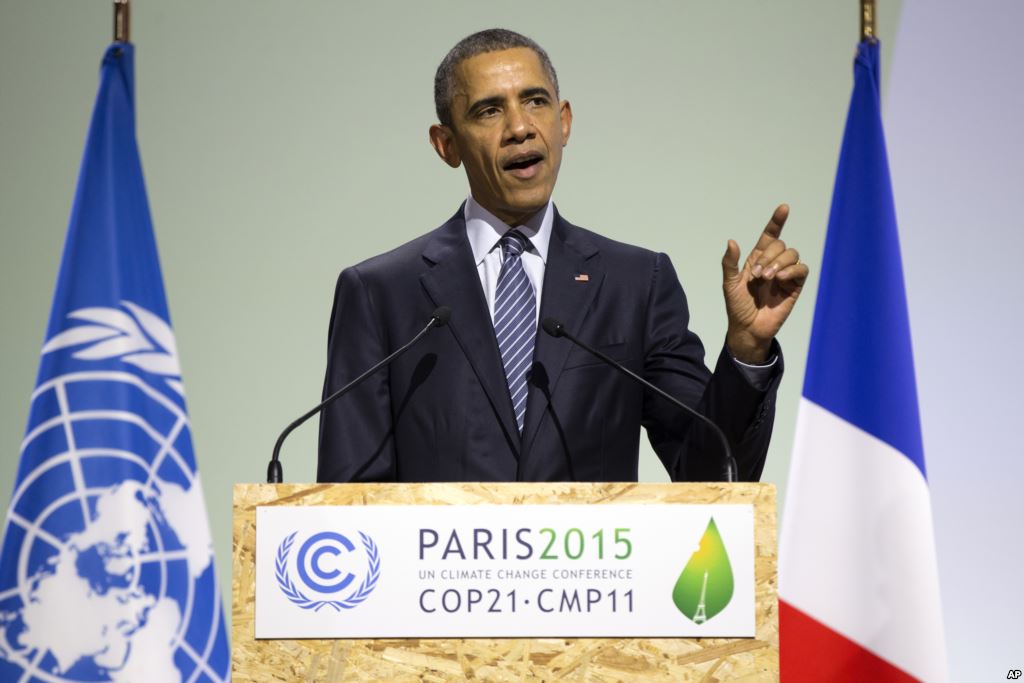 World leaders vowed Monday to save mankind from catastrophic climate change as an historic summit opened with the "hope of all of humanity" laid on their shoulders, but fault lines quickly emerged.

World leaders vowed Monday to save mankind from catastrophic climate change as an historic summit opened with the "hope of all of humanity" laid on their shoulders, but fault lines quickly emerged.

The heads of more than 150 nations -- a record -- kicked off 12 days of talks in search of an elusive pact that would shift the world economy away from its heavy use of fossil fuels blamed for global warming.

They gathered at a conference centre in Le Bourget on the northern outskirts of Paris, swathed by heavy security following terror attacks in the city which appear to have spurred the push for a climate breakthrough.

"Never have the stakes of an international meeting been so high, because it concerns the future of the planet, the future of life," French President Francois Hollande said in an opening speech.

"The hope of all of humanity rests on all of your shoulders."

Monday's event was the largest single-day gathering of heads of state or government in history, the United Nations said, highlighting widespread global commitment to the climate fight.

Many leaders also vowed to forge an ambitious deal in honour of the 130 people killed in the November 13 attacks in Paris, claimed by the Islamic State group.

The leaders began their talks with a minute of silence to remember the dead.

US President Barack Obama, who flew to Paris on the eve of the conference to pay homage to the victims, made a speech pledging American commitment and urging others to do the same.

"The United States of America not only recognises our role in creating this problem but embraces its responsibility to do something about it," Obama said, as he warned "the hour" of being too late was near.

"The future is one that we have the power to change, right here, right now."

Obama had earlier met with Chinese President Xi Jinping, bringing together the leaders of the two biggest carbon emitters, to highlight a partnership on climate they began to forge last year.

In his speech, Xi reasserted China's pledge for its carbon emissions to peak by 2030.

But he also insisted rich nations shoulder comparatively more of the responsibility in curbing global warming.

"Addressing climate change should not deny the legitimate needs of developing countries to reduce poverty and improve their people's living standards," Xi said.

He demanded rich nations honour their commitment, dating back to 2009, to mobilise $100 billion (95 billion euros) a year by 2020 to tackle climate change in poorer countries.

The United Nations has hosted annual conferences to address global warming since 1995, but its efforts have stumbled on divisions between rich and poor.

Many poor nations insist rich countries bear the most responsibility for tackling the problem as they have burnt the most fossil fuels since the Industrial Revolution on their way to prosperity.

But the United States and other developed nations argue more must be done by China, India and other emerging giants, which are voraciously burning coal to power their fast-growing economies.

Underscoring the difficulties ahead in Paris, Indian Prime Minister Narendra Modi argued his nation needed to continue burning cheap and plentiful coal to rise out of poverty, while developed countries should make deeper and faster cuts in their own emissions.

"The prosperous still have a strong carbon footprint and the world's billions at the bottom of the development ladder are seeking space to grow," he said.

Zimbabwean President Robert Mugabe lashed out at "miserly" developed nations that wanted to "burden us with cleaning up the mess they themselves have created".

And Bolivia's leftwing president, Evo Morales, blasted capitalist greed for setting the planet on a path to doom.

"If we continue on the path trod by capitalism we are condemned to disappear," he warned.

Stumbling blocks in Paris include providing finance for climate-vulnerable and poor countries, and transferring renewable technologies to developing nations.

Scrutiny of commitments to curb greenhouse gases and the legal status of the accord are other expected negotiating battlegrounds.

Aboard the papal plane after a tour of Africa, Pope Francis warned however that it was "now or never" for the world community to hammer out a deal, warning the situation was "borderline suicide".

Important progress has nevertheless been made in the runup to Paris, including a roster of voluntary pledges by 183 nations to reduce greenhouse-gas emissions, and other pro-climate measures.

To press world leaders into forging an agreement, more than half a million people participated in climate protests around the world over the weekend.

French authorities had banned protests in Paris due to security fears following the terror attacks.

But thousands of people in Paris gathered to create a two-kilometre (1.2-mile) human chain.

Their stand was disrupted, however, when anti-capitalist militants infiltrated the protests, leading to clashes with riot police which saw hundreds of arrests.

After the summit, Obama dined with Hollande at the famed, wood-panelled three-star Parisian restaurant L'Ambroisie, with US Secretary State John Kerry and French Prime Minister Manuel Valls among a dozen or so other guests.