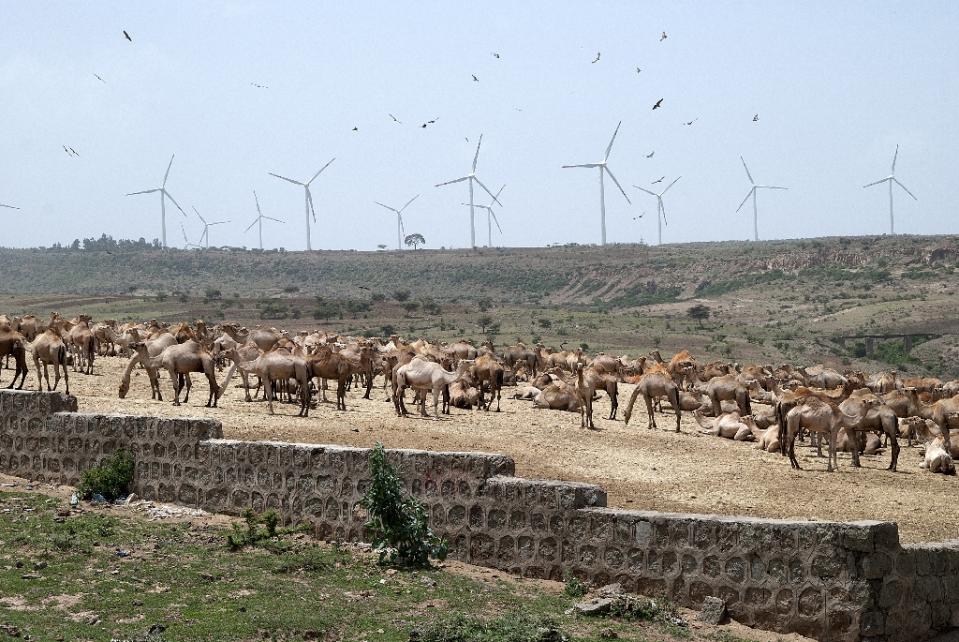 The wind blows hard over Adama, a range of rocky hills in Ethiopia's highlands that provide the perfect location for one of the continent's largest wind farms.

Camels stand near turbines of the Adama wind farm in Adama, south of the capital Adiss Ababa (Photo/AFP/Vincent Defait)

The wind blows hard over Adama, a range of rocky hills in Ethiopia's highlands that provide the perfect location for one of the continent's largest wind farms.

"In February, during the dry season, it is even difficult to stand here," said Solomon Yismaw, the engineer in charge of 102 Chinese-built turbines each rising 70 metres (230 feet) into the sky, lining the horizon.

Farmers using simple ox carts to plough the soil around the bases of the wind turbines offer a striking contrast between rural lives, little changed for centuries, and the central government's ambition to develop a modern, climate-resilient economy.

Without its own reserves of either gas or oil, Ethiopia is turning to its significant renewable energy potential to fuel its rapid economic development -- including damming the vast Blue Nile, with turbines there providing over 90 percent of the country's electricity production, and the southern Omo River.

But the flow of rivers is subject to rainfall that is erratic in Ethiopia.

"We have an abundance of hydroelectric energy sources, but during the dry season and when droughts happen the level of the dam decreases," said Solomon, who pointed out that the wind turbines were immune to the dry spells.

"At that time the wind will complement the dam. The wind is especially strong during dry season, so wind and hydro complement each other," said Solomon.

Ethiopia's energy needs are huge. Over 75 percent of Ethiopia's 94 million people, mainly those living in rural areas, are not connected to the national grid, and the country needs to increase its electricity production by 20 to 25 percent per year to meet rising demand, according to figures from the country's energy ministry.

Ethiopia has set a target of slashing its carbon emissions by two-thirds within the next 15 years, the most ambitious national goal yet presented to an upcoming United Nations climate change conference in Paris later this year.

Ethiopia said it plans to cut emissions by adopting cleaner practices in agriculture, construction and transport, as well as slowing deforestation.

While work continues on the vast Renaissance dam on the Nile -- the largest in Africa -- Ethiopia is working to boost other green power projects, harnessing geothermal, solar and wind energy.

"Wind farms are fast track projects, we can construct them within a short time," said Tahaguas Andemariam, consultant engineer and professor at the university of Adama.

"Within 24 months we have constructed this big wind farm of 153 MW -- hydro would have taken much longer," he said.

The 6,000 MW that the Renaissance dam will generate will dwarf the output of the Adama wind farm, but the construction of the facility which began in 2011 isn't slated to finish until 2017.

Yet the Adama wind farm can still power about 10 million efficient light bulbs.

Another wind farm, even larger in size and intended to produce 300 MW, is due to be constructed at Ayesha in the remote eastern desert near the border with Djibouti, another area with strong winds.

"We now have the knowledge how to develop the roadmap of this wind technology in Ethiopia," said Tahaguas, who spent a month in China working with other engineers to learn more about the turbines.