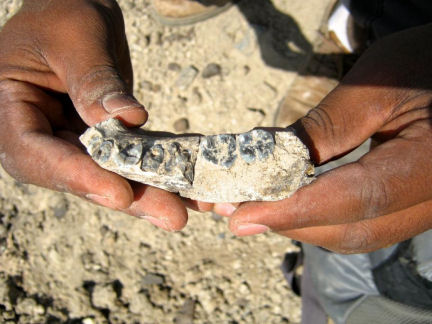 A piece of jawbone with teeth attached, uncovered in Ethiopia, is the earliest known fossil of the genus Homo, to which humans belong, researchers said Wednesday.

A piece of jawbone with teeth uncovered in Ethiopia, March 4, 2015. (Photo/AFP/Brian Villmoare)

A piece of jawbone with teeth attached, uncovered in Ethiopia, is the earliest known fossil of the genus Homo, to which humans belong, researchers said Wednesday.

The discovery suggests that humankind's ancestors were living in what is now the Ledi-Geraru research area of Afar Regional State, Ethiopia, in open grassland environments, near lakes, rivers, and active volcanoes, about 2.8 million years ago, or 400,000 years earlier than previously thought.

"It is the first fossil we have on the branch that leads toward us," said Brian Villmoare, assistant professor at the University of Nevada, lead author of the study in the journal Science.

The jawbone, known as LD 350-1, is the lower left side of a mandible with five teeth, and was found in fine sediment near the surface of the research site in 2013.

The fossil has not yet been assigned to a particular species, but its slim molars and dental arch proportions indicate an advancement that is not seen in the more ape-like Australopithecus afarensis, dating just a few hundred thousand years earlier.

Experts described the fossil as a very early representative of the species that led to modern humans, though not a direct ancestor of our particular species, known as homo sapiens.

Researchers are particularly intrigued because the fossil dates to a period when few such artifacts have been found, and sheds light on the time when early hominids diverged, as the ancestors of homo sapiens split from the more ape-like australopithecus, which walked upright but had smaller brains.

"The fossil record in east Africa between two and three million years ago is very thin and there are relatively few fossils that can inform us about the origins of the genus homo," said Villmoare.

"However this is one of the most interesting periods in human evolution."

The last known fossil of most recent member of Australopithecus afarensis ("Lucy") comes from the nearby Ethiopian site of Hadar and is about 3.2 million years old.

Meanwhile, the oldest known Homo fossil was, until now, believed to be about 2.3 or 2.4 million years old.

The refinement seen in the new fossil "suggests that the transition itself was relatively rapid," said Villmoare.

"Of course this specimen raises many more questions than answers, and those questions will only be resolved by further fieldwork."

With few trees around, and a climate that was likely hot and dry, this creature had likely adapted in ways that were different than Australopithecus.

"This early homo could live in this fairly extreme habitat and that apparently Lucy's species could not," said Kaye Reed, a co-author on the paper from Arizona State University.

The journal Science's deputy editor Andrew Sugden described the findings as opening a "major new chapter in the story of human evolution in Africa, which expands our understanding not only of human origins, but also of the environments in which our ancestors emerged."

A related paper in the journal Nature described how state-of-the-art computer reconstruction of the pieces of a Homo habilis fossil -- declared in 1964 to be the earliest known member of our human evolutionary lineage -- shows that this so-called Handy man's jaw was actually more primitive than previously thought.

The fossil Olduvai Hominid 7, or OH 7, included a lower jaw, parts of a braincase and hand bones from an individual found in 1.8 million-year-old sediment in Tanzania.

Researchers used computed tomography (CT) and 3D imaging technology to digitize and reassemble the bone fragments on a computer screen.

The result was a lower jaw that was more narrow, and more like the older species Australopithecus afarensis, than the more closely related Homo erectus.

The braincase of the Handy man however was larger than previously estimated and looked similar to that seen in Homo erectus.

Researchers now understand that were vast differences in the jaws of three different early Homo species that lived between 2.1 and 1.6 million years ago: Homo habilis, Homo erectus and Homo rudolfensis.

"It's an excellent case of a transitional fossil in a critical time period in human evolution."