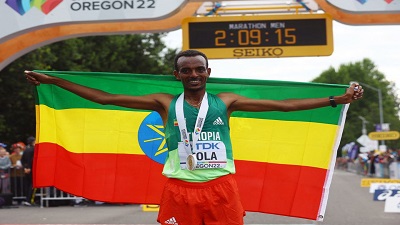 Ethiopia's Tamirat Tola won the World Championship men's marathon in dominant fashion on Sunday as heforged powerfully clear around 34km to come home more than a minute ahead to take gold in a championship record two hours, 05.37 minutes.

Ethiopia's Tamirat Tola won the World Championship men's marathon in dominant fashion on Sunday as heforged powerfully clear around 34km to come home more than a minute ahead to take gold in a championship record two hours, 05.37 minutes.

aking advantage of relatively cool conditions afforded by the 6.15 am local start time, the 2017 silver medallist splintered the pack with a sustained acceleration and by 39km he was safely 46 seconds clear and continued to press all the way home.

Over a minute back in 2:06.44, Mosinet Geremew made it an Ethiopian 1-2 for the second World Championship in a row with his second successive silver. Belgium's Somalia-born Bashir Abdi matched his bronze from the Tokyo Olympics in 2:06.48,taking his country's first medal in the event for men or women.

All three men were inside Abel Kirui's 2003 championship record of 2:06.54 in Paris, though championship marathon time comparisons bear little scrutiny due to course differences.

The early pace was brisk, but manageable, keeping a pack of over 30 together at halfway, but Ethiopian defending champion Lelisa Desisa wasn't one of them as he fell off the back and eventually dropped out.

American favourite and former University of Oregon runner Galen Rupp was next to slip back, much to the disappointment of the fans lining the three-lap course, which was also livened up by large numbers on bikes accompanying the runners.

Tola, 30, made what turned out to be the decisive move soon after, escaping solo to almost immediately open a 12-second gap at 35km and splintering the pack on the back of a 2.44 minute kilometre.

From then on, looking relaxed throughout, he steadily built the lead as the chasing group was reduced to three.

He waved to the crowd over the last few hundred metres, enjoying the biggest win of his career.

"It was a dream come true," Tola said. "I learned from my mistake in 2017 (World Championships) and I made sure it did not happen again."

Geremew broke clear for second and Abdi was just behind him. Canada's Cameron Levins delivered a late surge to take fourth in a national record of 2:07.09, with Kenya’s Geoffrey Kamworor, back racing after suffering a badly broken leg after being hit by a motorbike during a training run in 2020, finishing fifth.