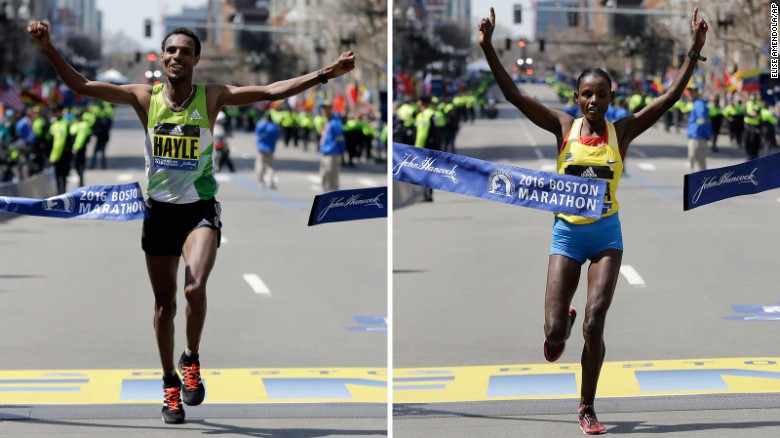 At the 15-mile mark of the women’s race at the 120th Boston Marathon on Monday, the pack had dwindled to four runners. Atsede Baysa of Ethiopia was not one of them. At 22 miles, she was 37 seconds behind.

At the 15-mile mark of the women’s race at the 120th Boston Marathon on Monday, the pack had dwindled to four runners. Atsede Baysa of Ethiopia was not one of them. At 22 miles, she was 37 seconds behind.

But when the race was over, Baysa, 29, had stormed past the leaders for an unlikely victory.

The women’s race initially followed the familiar pattern of a large pack that gradually dwindles. At 15 miles, it seemed as if the winner would be one of the four leaders: the Kenyans Valentine Kipketer, Flomena Cheyech Daniel and Joyce Chepkirui; and Tirfi Tsegaye of Ethiopia.

Daniel was the first to fall away, followed by Kipketer. Tsegaye and Chepkirui ran side by side until Baysa unexpectedly came into the picture with a fierce rally, passing both with two miles to go. Tsegaye finished second and Chepkirui third.

Baysa is a veteran marathoner, with wins in Paris, Istanbul and Chicago. She won on Monday in 2 hours 29 minutes 19 seconds.

The women’s favorite, the defending champion Caroline Rotich of Kenya, dropped out after five miles.

The race this year celebrated the 50th anniversary of the first woman to finish, Roberta Gibb.

On the men’s side, a two-time champion, Lelisa Desisa of Ethiopia, pushed the pace at the hills at 15 miles, and only Berhanu Hayle went with him. The two pulled away from the field and ran together almost the rest of the way until Berhanu Hayle pulled away to finish in 2:12:44.

Berhanu Hayle had won lesser marathons in Zurich, Dubai and Warsaw, but Monday’s victory was by far his biggest.

Desisa is a well-liked figure in Boston who formed a bond with the city after winning in 2013, the year of the terrorist bombing at the race, and again last year. He donated his winning medal from 2013 to the city.

The American racing contingents were small, as most of the big names were focused on the Rio Olympics. The top Americans were Zachary Hine in 10th and Neely Spence Gracey, who finished ninth among the women.

The elite Ethiopian and Kenyan entrants were hoping to impress their national selectors for the Olympics.

The men’s wheelchair race was won by the defending champion, Marcel Hug of Switzerland, in a close three-way finish. He edged the 10-time winner Ernst van Dyk and Kurt Fearnley in 1:24:01.

The women’s wheelchair race was won for the fourth straight year by Tatyana McFadden of the United States. She won by more than a minute, in 1:42:15.