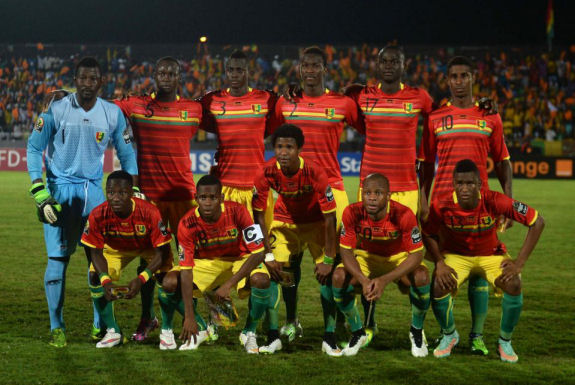 Guinea qualified for the Africa Cup of Nations quarter-finals in bizarre fashion on Thursday after a drawing of lots was required to separate them and Mali.

They will go through to a quarter-final on Sunday in Equatorial Guinea's capital Malabo against Group C winners Ghana while unfortunate Mali go home.

Guinea's players line up ahead of the 2015 African Cup of Nations group D football match between Guinea and Mali in Mongomo, on January 28, 2015 (AFP/Khaled Desouki)

Guinea qualified for the Africa Cup of Nations quarter-finals in bizarre fashion on Thursday after a drawing of lots was required to separate them and Mali.

They will go through to a quarter-final on Sunday in Equatorial Guinea's capital Malabo against Group C winners Ghana while unfortunate Mali go home.

The surreal event took place during a meeting of the tournament Organising Committee at a hotel in Malabo and was attended by AFP.

A representative of each team was sent to take part -- each picked out a green ball with the winning one containing a piece of paper marked with the number two inside.

"It is the worst kind of cruelty to force a team to do this," Diarra said after.

"We would have preferred to lose on sporting criteria, which is why the CAF (Confederation of African Football) must look again at their rules.

"We'd prefer to lose on the pitch. They should have counted the number of corners or free-kicks, or take into account fair-play. But not lose like that.

"We have built our team patiently. Mali has not had a team like that for 20 years, so to lose like that in a drawing of lots is the worst kind of cruelty. There is no worse way to lose at this stage with the team we have."

Just before the draw, CAF president Issa Hayatou said: "I'm not happy that we have to do this but we have no choice."

However, CAF general secretary Hicham El Amrani pointed out that the unlucky losers could have few grounds for complaints about a regulation which was approved before the competition began.

"We are obviously not happy to have to have a drawing of lots to decide the winner between two football teams, but we must respect the rules which are clear," he told AFP.

"The two teams had identical scores in their three matches. It is a situation which only happens every 20 or 30 years.

"The rules were accepted by all the teams before the competition even began. These things can happen.

"It is unfortunate for the supporters and difficult for them to accept. We are sorry for them but we had to find a way to separate the teams.

"We could not organise a match between the teams because there is no space in the calendar, so that is why the regulations are laid out as there," added El Amrani, who insisted that the image of the competition was not tarnished by having to resort to such a method.

Guinea and Mali were left to draw lots after they finished deadlocked on three points each behind winners the Ivory Coast in Group D.

Both had identical records after drawing 1-1 in all three of their group games, including against each other in Mongomo on Wednesday evening.

There are precedents at the Cup of Nations for such a curious drama, with a drawing of lots needed in 1988 to take Algeria through to the knockout stage at the expense of the Ivory Coast in Morocco.

Before that, in 1965, Tunisia qualified for the final from a three-team group ahead of Senegal via the toss of a coin.

More recently, a drawing of lots was required at the 1990 World Cup in Italy after the Netherlands and the Republic of Ireland finished tied for second place in their group.

Both teams were guaranteed a place in the knockout phase but a draw was needed to determine who played who in the next round.

Guinea have not appeared in the quarter-finals of the Cup of Nations since 2008, while Mali will not be able to match their third-place finishes in 2012 and 2013.