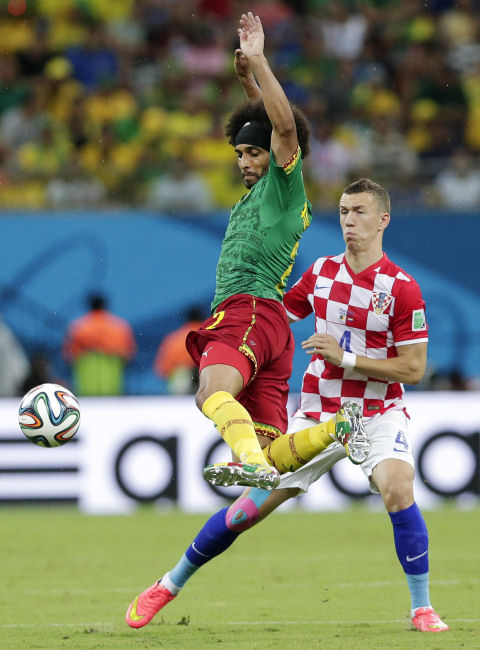 Mario Mandzukic scored two goals Wednesday to keep Croatia in the mix at the World Cup with a 4-0 win over 10-man Cameroon, which will be going home after the group stage.

Mandzukic, who returned to the team at the Arena da Amazonia after sitting out the opening loss to Brazil through suspension, headed in a corner from Danijel Pranjic in the 61st minute and then knocked in a rebound in the 73rd of the Group A game.

Cameroon's Benoit Assou-Ekotto, left, kicks the ball away from Croatia's Ivan Perisic during the match between Cameroon and Croatia at the Arena da Amazonia in Manaus, Brazil, June 18, 2014. (AP/Marcio Jose Sanchez)

Mario Mandzukic scored two goals Wednesday to keep Croatia in the mix at the World Cup with a 4-0 win over 10-man Cameroon, which will be going home after the group stage.

Mandzukic, who returned to the team at the Arena da Amazonia after sitting out the opening loss to Brazil through suspension, headed in a corner from Danijel Pranjic in the 61st minute and then knocked in a rebound in the 73rd of the Group A game.

"I was well prepared and had more time to prepare because I missed the first game. I had some extra training," Mandzukic said. "I don't want to think too much about goals. We wanted to win, and the goals came as a reward."

Ivan Perisic also scored one goal and made another for Ivica Olic.

Cameroon was reduced to 10 men after midfielder Alex Song was given a red card for elbowing Mandzukic in the back in an off-the-ball incident in the 40th minute.

Cameroon started without the injured Samuel Eto'o, the team's best player. And the frustration within the team boiled over in injury time when Benoit Assou-Ekotto head-butted teammate Benjamin Moukandjo in front of their goal.

"It's unimaginable. I saw this happen and I need to find out exactly what happened, why exactly these two players exploded," Cameroon coach Volker Finke said. "I really hate to see that. It's not the image of Cameroon I want to project."

Croatia now has its future in its own hands. If the 1998 World Cup semifinalists beat Mexico on Monday, they will guarantee themselves a spot in the second round. The Mexicans will advance with only a draw.

Cameroon is out, however, and can only play spoiler in its final match against five-time champion Brazil, also on Monday. If the 1990 World Cup quarterfinalists beat Brazil, the host country could still advance or be forced out of the tournament on goal difference.

Darijo Srna started the move for the first goal, whipping a cross into the area from the right in the 11th minute. Mandzukic and Nicolas Nkoulou then collided while going for it, but the ball popped loose to Perisic. The Croatia midfielder stepped up and coolly slid the ball into the path of Olic to tap in.

"Tactically, we didn't open the match well the first 10 minutes. We had some problems on the left flank," Croatia coach Niko Kovac said. "But then we scored a very important goal."

Perisic did it all himself early in the second half, beating Cameroon defender Dany Nounkeu to a long pass from goalkeeper Charles Itandje and taking it all the way back to where it came from.

Perisic, with Nounkeu chasing him, ran into the area down the left and gave himself a tough angle before slipping his shot between Itandje and the near post in the 48th.

Mandzukic was left unmarked to head home Croatia's third goal and followed up with the simplest of tap-ins when Itandje spilled a shot from Eduardo.

Cameroon knew it needed points against Croatia, and the team came out fast in an effort to take the early lead. Several dangerous attacks down the right flank caused concern to the Croatia defense early, but none of them materialized into any real danger.

A few late chances came close, but nothing got past Croatia goalkeeper Stipe Pletikosa.

"The team tried with only 10 players, but the second goal arrived very early in the second half, unfortunately," Finke said. "After that it was an uphill battle."

The loss of Eto'o, who came to Brazil with a right knee injury, was a blow to the team, however. Although Cameroon still went on the attack even without their best attacker, the finishing class of the former Chelsea and Barcelona striker was missing.

The loss of Song didn't help, either.

The midfielder, well away from the ball, was running back from the Croatia end when he lashed out and elbowed Mandzukic in the back. Referee Pedro Proenca of Portugal immediately pulled out his red card and sent Song off.

Song is the cousin of Cameroon great Rigobert Song, one of only two players to be sent off at two different World Cups. The other is Zinedine Zidane.