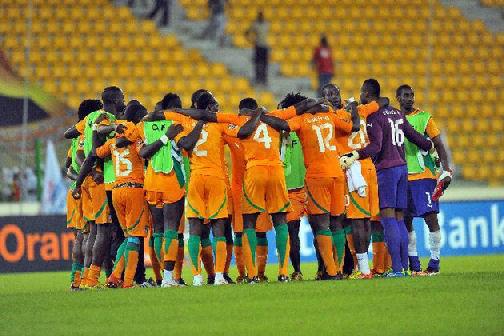 A virtual reserve Ivory Coast side cruised to a 2-0 win over Angola on Monday in a lacklustre Group B match at the 2012 Africa Cup of Nations.

Emmanuel Eboue and Wilfried Bony scored for the Elephants, who topped the final table with three wins while Angola lost out to Sudan on goal difference in the battle for second place.

A virtual reserve Ivory Coast side cruised to a 2-0 win over Angola on Monday in a lacklustre Group B match at the 2012 Africa Cup of Nations.

Emmanuel Eboue and Wilfried Bony scored for the Elephants, who topped the final table with three wins while Angola lost out to Sudan on goal difference in the battle for second place.

The Ivorians remain in this island city to tackle co-hosts Equatorial Guinea next Saturday while Sudan face Zambia earlier the same day in Bata in the first quarter-final.

Ivory Coast coach Francois Zahoui, while relieved to see his side progress, said: "The real relief will be to win the title. We'll keep our feet on the ground. I'll be happy when we have achieved our aim of bringing pleasure to the Ivorian people.

"We want to make it to the end, otherwise a couple of wins doesn't mean anything."

Angola manager Jose 'Lito' Vidigal reflected: "It was really difficult and we worked very hard to go through.

"We had lots of problems to qualify for this Nations Cup, but I'd like to thank all our fans.

"We were up against a very strong Ivory Coast side who are going to go far in this tournament."

Zahoui had hinted that he would rest some of his first choices -- but leaving nine on the bench came as a surprise with the only regulars in the starting line-up being centre-backs Kolo Toure and Souleymane Bamba.

Kolo Toure, older brother of 2011 African Footballer of the Year Yaya Toure, captained the team in the absence of Didier Drogba and Salomon Kalou was grateful for the rest after limping off against Burkina Faso last Friday.

Angola made two changes from the team held by Sudan with goalkeeper Wilson replacing suspended Carlos, whose two yellow cards came for time wasting, and Dede coming in for off-form striker Flavio.

The first half did little to excite another small crowd in the 15,000-seat Nuevo Estadio de Malabo apart from a goal on 33 minutes by former Arsenal defender Eboue.

After carelessly conceding possession in midfield, Angola were caught napping as a surging run from Bony took him into the penalty area and when Miguel failed to clear, Eboue tapped the ball in at the far post.

It was the first time in three outings that the Black Antelopes had fallen behind and with Sudan taking the lead in the same minute against Burkina Faso, the pressure was on the team from the south west of the continent.

The Angolans fell further behind on 64 minutes when a long pass into opposition territory by substitute Abdul Kader Keita led to a mix-up between centre-back Massunguna and goalkeeper Wilson, and a gift goal for Bony.

Massunguna panicked under pressure and headed the ball back over his advancing goalkeeper, leaving Bony to run in unopposed and tap the ball over the line.

Angola introduced Germany-born Nando Rafael as time ticked away and finally came alive with a header from former Manchester United striker Manucho forcing Daniel Yeboah into a good reflex save.