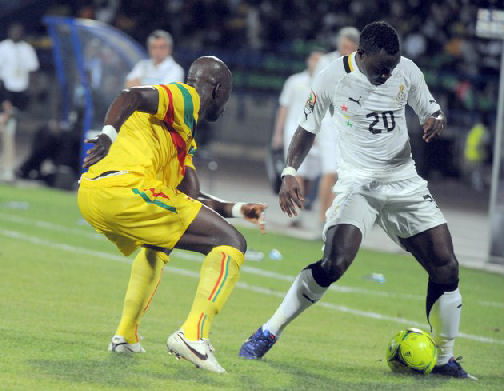 The 2010 World Cup quarter-finalists are now top of the group on six points from two matches, while Guinea and their opening-day conquerors Mali are on three points, with all three teams still in the reckoning to advance to the knockout stage.

The 2010 World Cup quarter-finalists are now top of the group on six points from two matches, while Guinea and their opening-day conquerors Mali are on three points, with all three teams still in the reckoning to advance to the knockout stage.

To add to the suspense, even pointless Botswana are not mathematically out of contention.

On Wednesday, Mali will battle Botswana in Libreville and Ghana take on Guinea in Franceville in the final throw of the Group D dice.

"We had a few difficulties in the first half, but the boys showed strong character and we changed tactics and put pressure on them to make mistakes in the second half," said Asamoah Gyan.

"This was a very important victory and we hope to continue to make Ghana proud."

Mali skipper Cedric Kante said they have not given up hope of reaching the quarter-final of the tournament.

"We still have our destiny in our hands as it is now down to our last game against Botswana," said the Greece-based centre half.

"We did not fight, we were not daring and we did not ask questions of the other team.2

Star striker Gyan opened the scoring for Ghana in the 63rd minute with a well-struck free-kick from the edge of the Mali box after Andre Ayew was brought down by Bakaye Traore.

‘Baby Jet’ Gyan had struggled with an ankle injury leading up to the game but Ghana coach Goran Stevanovic insisted on fielding the UAE-based star and it paid handsome dividends.

Mali came close to restoring parity two minutes after Gyan’s opener through Sochaux forward Modibo Maiga, who perfectly met a header from a corner only for the ball to roll out for a goal-kick.

Ayew doubled Ghana's lead in the 76th minute when he was stylishly set up by Gyan on the edge of the Mali goal area and drove in to unleash an unstoppable pile-driver past Soumaila Diakite in the Mali goal.

This was a typical derby with no fewer than six bookings as both teams cancelled each other out in a packed midfield with tough tackles flying in all directions.

Big Mali striker Cheick Diabate proved in the first half to be a thorn in the flesh of the young Black Stars central defence of Jonathan Mensah and John Boye, playing in the absence of the more experienced John Mensah and Isaac Vorsah.

It was a cagey start by both teams and it was not until the 25th minute that Asamoah Kwadwo made the first real attempt at goal.

The Udinese midfielder, who was starting his first game of the tournament, fired from distance only for Diakite to parry into the path of Sulley Muntari, who shot wide.

Ten minutes later, the same player blasted another fierce shot from the edge of the Mali goal area, but again it was off-target.

On 38 minutes, Mali responded nicely with a Diabate free-kick on the edge of the box that struck both posts with diving Ghana goalkeeper Adam Kwarasey beaten.

In first-half additional time, Ayew rose above two Mali defenders to meet a cross from the right by stand-in skipper John Pantsil, but again it was off the mark.

The hard-working Ayew then forced a fine save from the Mali goalkeeper with a low drive from well outside the box in the 54th minute.