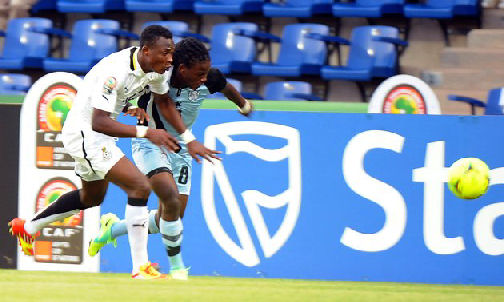 Ghana and Mali came out on top as the Africa Cup of Nations completed its opening batch of group matches here on Tuesday.

Ghana are with Ivory Coast carrying the tag of favourites on their shoulders and they duly earned the three points with a 1-0 win in their Group D clash with Botswana.

Ghana and Mali came out on top as the Africa Cup of Nations completed its opening batch of group matches here on Tuesday.

Ghana are with Ivory Coast carrying the tag of favourites on their shoulders and they duly earned the three points with a 1-0 win in their Group D clash with Botswana.

Black Stars skipper John Mensah got the only goal of the game in the 24th minute when he helped in a corner from the left taken by Emmanuel Agyemang Badu.

That was the high point of the Lyon defender's night as on 65 minutes he picked up the first red card of the 2012 competition when he committed a professional foul on striker Jerome Ramatlhakwana, who was clear in on the Ghana goal after a blunder by Anthony Annan.

The Zebras now with a numerical advantage finished the stronger, but they failed to restore parity.

"We controlled the game until the red card for Mensah," said Ghana coach Goran Stevanovic.

"We created some chances but they closed down the game with 10 men behind the ball.

"All the same, it was very important that we won our first game of a tournament that has already produced some surprises."

Botswana coach Stanley Tshosane said: "I’m happy with the result but with the performance especially in the second half."

Mali were next out at Franceville and they took the bragging rights in their west African derby with Guinea, like Ghana before them prevailing 1-0.

Against the run of play, Bakaye Traore scored the decisive goal on the half hour with a fierce shot from outside the box off a loose ball.

It was a case of history repeating itself as Mali also triumphed when both countries last clashed at this level in 2004 in Tunisia.

"We are very disappointed with this result. We were not lucky and that’s why I’m disappointed," said Guinea coach Michel Dussuyer.

"But I still believe we can do something against Botswana and Ghana in our next two games."

Mali coach Alain Giresse commented: "It was important to start well and so three points was the best thing for us. We are satisfied."

"We controlled the first half, but thereafter we made some mistakes and Guinea were good and had some possibilities to equalise."

For one player the 2012 Nations Cup is sadly over before it barely began.

Niger starlet Tidjani Amadou Moutari Kalala, who only turned 18 last week, is flying to France for an operation on a fractured fibula suffered five minutes after he came on as a substitute in his side's 2-0 loss to co-hosts Gabon in Libreville on Monday.

Across the border in Equatorial Guinea the other co-hosts, were in the money after receiving the promised 800,000 euros bonus from the son of the country's president for beating Libya on Saturday.

Equatorial Guinea could swell their bank accounts further if they defeat Senegal in their second Group A clash in Bata on Wednesday.

"I ask you to play (against Senegal on Wednesday) like you did in the first match, scoring more goals. My bonuses will continue for the coming games," Teodorin Obiang Nguema told the team.

The other Group A tie sees fairytale qualifiers Libya needing their first Nations Cup win in 30 years, against Zambia, to realistically hold out any hopes of prolonging their stay after the first round.