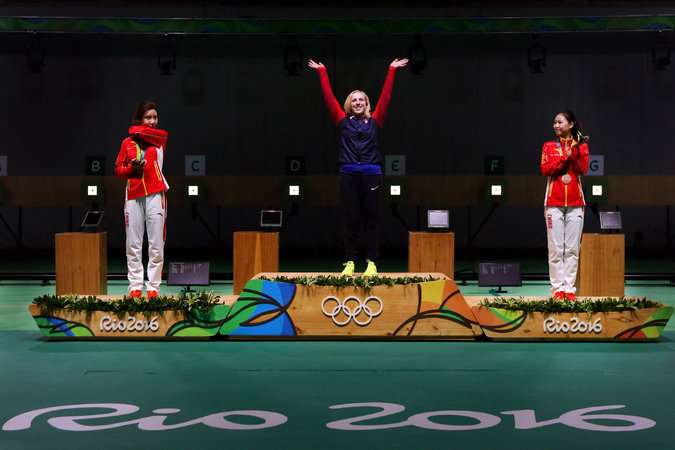 Interim Brazilian President Michel Temer presided over the opening of the games inside Maracana Stadium, with dozens of heads of state in attendance. He took over from suspended president Dilma Rousseff, who is facing an impeachment trial and tweeted she was "sad to not be at the party."

Despite the political unpleasantness, a huge throng of spectators attended the ceremony at Rio's Maracana Stadium, among them French President Francois Hollande and Italian Prime Minister Matteo Renzi, both of whom have cities in the running for the 2024 Olympic Games.

Fireworks and dozens of dancers set the show in motion with bright colors, shiny fabric and plenty of the passion for which Brazil is famous.

Brazilian Grammy winner Gilberto Gil wrote the song Aquele Abraco, that began the ceremony. Gil spent several years living in exile in London when Brazil was ruled by a military dictatorship. His song expresses love for his homeland, and specifically for Rio.

The song was a part of Brazil's long, proud musical history, which was on full display during Friday's ceremony. From funk to samba to hip-hop, it was all featured as the opening built toward the entrance of athletes from around the world. Among the featured artists were Ludmilla, Cristian Do Passinho, Lelezinha, Elza Soares, Marcelo D2 and Karol Conka.

Video screens around Maracana Stadium showed some of the lyrics, mostly in Portuguese, as fireworks went off and dancers clad in huge, multicolored wigs and red, yellow, white and orange outfits performed on the stadium floor.

After the nearly four-hour ceremony was over - about 45 minutes longer than scheduled - Brazilian spectator Amanda Ramos Amore shared her thoughts with VOA.

“I loved it. It was like perfect. I've never seem something like that before.” She added that it exceeded her expectations.

“I don't have many more words. I am speechless. I had some American people around me and some Colombian people and they loved it too.”

As could be expected, there were huge rounds of applause for South American countries, particularly Argentina, Chile and Colombia.

The United States, typically with the biggest delegation at the Olympics, also received a loud ovation. Other countries with audibly large numbers of supporters in the crowd were Mexico, Jamaica, Portugal, Italy, Spain, France and Japan, with Cuba and Puerto Rico both fondly welcomed by the crowd. The Russian team, with many members barred because of the country's doping scandal, received polite applause.

But the noise when the Brazilian team began to march in was thunderous. And shouts of “Brazil, Brazil, Brazil” continued until the entire team was in position on the Maracana Stadium floor.

Hours before the start of the ceremony, riot police broke up a small protest in Rio. Police used tear gas and stun grenades to subdue the group of a few hundred people who were denouncing what they said was corruption and overspending in preparation for the games.

Protester Henrique Mena told The Associated Press: "People are using the Olympic Games as a justification to exclude people, the poor people, in the city. We have a very unequal city, a very divided city, and after the Olympics we are going to have an even more divided and segregated city."

The 2016 Games, protesters say, provide benefits to a few while leaving those who are most in need without proper pay, education and health care.

Still, organizers say the budget for the games is only one-tenth that of the amount spent on the 2012 Games in London.

In some cases, budgetary woes caused high-profile problems. The Australian Olympic team initially refused to move into its housing, citing clogged toilets and exposed wiring in the dormitories. After several days' delay, the problems were corrected and the team moved in — only to have to evacuate briefly, two days later, because of a fire scare.

Olympic facilities have been plagued with other problems, such as the collapse of a boat ramp a week ago that still has not been fixed, and worries about sanitary conditions, such as water pollution and the threat of Zika virus transmission through mosquito bites.

And even the torch relay hit a rough patch Friday, as organizers diverted its course away from the famed Copacabana Beach to avoid crowds of protesters and Olympic fans.