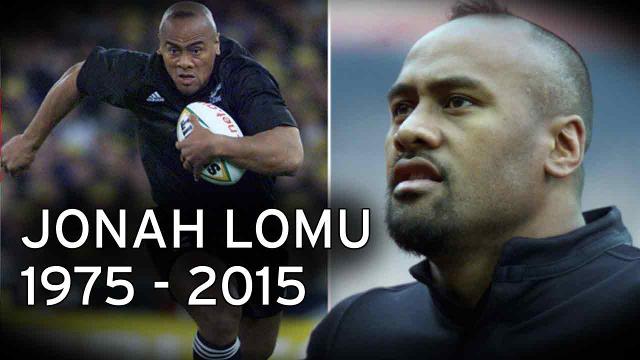 The worshippers gathered at the Lotofale'ia Mangere Tongan Church in the South Auckland suburb where Jonah Lomu was raised grieved for the man who put their community on the international map as he strode or barged his way to becoming the first genuinely global super star of rugby.

The worshippers gathered at the Lotofale'ia Mangere Tongan Church in the South Auckland suburb where Jonah Lomu was raised grieved for the man who put their community on the international map as he strode or barged his way to becoming the first genuinely global super star of rugby.

New Zealand will consider a state funeral for the legendary All Blacks winger whose death from a cardiac arrest Wednesday, aged 40, was mourned from world capitals to his family village on the Pacific island of Tonga and across the country in which he grew up and represented with distinction.

"He kind of opened up the door for the Pacific Islanders," she said. "So he did a lot, not just for Tongans but as well for the Pacfic and New Zealanders."

Members of Lomu's family on Tonga reportedly were traveling from outer islands to the village of Holopeka for a traditional 10-day period of mourning. Many villagers have already donned ta'ovala or ceremonial mourning clothes.

The governor of the Ha'apai island group, Mo'ale Finau, said villagers were deeply saddened "because it's the loss of a superstar, especially because Jonah has grown up here.

"This is sad, not only for Ha'apai but for all the people of Tonga as well. The whole village will be mourning. Some of the people are wearing black already."

Finau said he believed Lomu, who lived in Tonga until age five, would be buried in New Zealand. Lomu died at his Auckland home the day after returning from Europe, where he attended the Rugby World Cup and was well enough to participate in a Haka in downtown London in September to help promote the tournament.

Lomu was the undisputed star of the 1995 and '99 Rugby World Cups, despite never winning the title. The way he combined his size, strength and speed, though, changed the way players, fans and coaches perceived the game.

In New Zealand, Australia, Britain, France and South Africa and other parts of the rugby world where he remained one of the sport's most famous names a decade after kidney illness forced his retirement from the game, Lomu was remembered not just for his prowess but his kindness and humility.

Sean Fitzpatrick, who was the All Blacks captain at the '95 World Cup when Lomu surged to international fame as a 20-year-old winger, remembered first seeing him play. He combined the size of a front-row forward — 1.96 meters tall (6-foot-4); 119 kilograms (262 pounds) — with the speed of a sprint champion.

"The Australian schoolboys were playing the New Zealand schoolboys and this one J. Lomu scored I think three or four tries while we were watching the game," Fitzpatrick said. "And blow me down, within 12 months he was playing on the wing of the All Blacks.

"Little did we know that we were going to end up with a 19-1/2 stone, 6'5" winger who was going to wreak havoc," Fitzpatrick told Radio New Zealand. "He broke the mold really of what rugby players were meant to do, and in the space of six or seven games he became a global superstar."

"You can go anywhere in the world, you can hop in a taxi in New York and talk about the All Blacks and the only name they will mention is Jonah Lomu, which says so much," he said

Lomu's fame exploded when he scored four tries for the All Blacks against England at the '95 World Cup in South Africa. The first of those tries was the most famous of his career — he scored 43 tries in 63 tests — when he trampled over England fullback Mike Catt on the way to the tryline.

Catt said Lomu "put me on the map. Everybody knew who Mike Catt was. For all the wrong reasons, of course."

Lomu's performances in '95 hurried rugby toward professionalism. Broadcasters, recognizing his popularity and impact on the game, rushed to secure broadcasting rights, pouring hundreds of millions of dollars into the sport to make players payments possible.

"There were some wonderful players who had gone before him, don't get me wrong," former Australia captain George Gregan said. "But at the time when rugby was amateur, going into professionalism, he was the guy that everyone saw perform on the world stage, which was the 1995 World Cup, and dominate and do things that no-one else had seen."