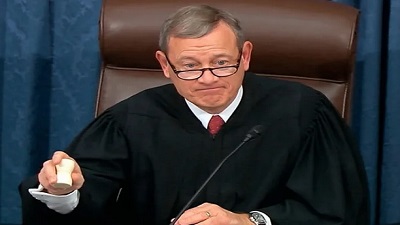 During his 17-year tenure as chief justice, John G. Roberts Jr. has sought to project an image of the consummate institutionalist — a right-of-center beacon of integrity championing the Supreme Court’s role as an impartial arbiter of the law.

During his 17-year tenure as chief justice, John G. Roberts Jr. has sought to project an image of the consummate institutionalist — a right-of-center beacon of integrity championing the Supreme Court’s role as an impartial arbiter of the law.

It must be a painful irony, then, that the legacy of the Roberts court will surely be that of a diminished judicial branch: the court’s composition politically manipulated, its deliberations compromised by an unprecedented leak, its membership riven by the same unbridgeable partisan divisions as the country at large and its public reputation at a nadir.

Laying all this at the feet of the presiding chief justice is not entirely fair. Despite common perception, the chief justice is merely a “first among equals” with scant power to bend the institution to his or her will. The chief does preside over the court’s post-argument conference where tentative votes are taken. When in the majority (but only then), the chief also gets to choose the author of the court’s decisions. Some chiefs have been masters of the art of persuasion (Earl Warren in the 1950s building unanimity around Brown vs. Board of Education); others not at all (Warren Burger creating resentments at every turn in the ’70s and ’80s).

But even the most effective chiefs have been powerless to overcome deep ideological commitments. In the end, power at the court comes down to counting votes. As Justice William Brennan was fond of saying, the most important rule at the court is the Rule of Five — five votes wins, no matter what, and the chief only gets one.

The last 50 years demonstrate the point. Amid increasingly sharp ideological divisions, the court’s direction has been determined not by the various chief justices, but by whichever justice was the key to building a five-vote majority on the major issues of the day. On the Burger court, that was Lewis Powell. On the Rehnquist court, in the Bush and Clinton years, that was Sandra Day O’Connor or Anthony M. Kennedy — so much so that wags dubbed that era the O’Kennedy court.

Now Roberts has surrendered that “swing” role to whichever of the court’s five archconservatives might prove to be the least right-wing, arguably Brett M. Kavanaugh, though the five are mostly a monolith. Roberts is at their mercy, and they are leaving his purported commitment to institutionalism in shambles.

But one should not feel too sorry for the chief. He did plenty all by himself to earn the court its newfound reputation for rank partisanship and radical conservatism, and he helped lay the groundwork for the Trumpian takeover of the institution.

At his confirmation hearings, Roberts placed himself squarely in the tradition of nominees willing to utter whatever disingenuous tripe would ease confirmation. In his case, that meant comparing himself to a baseball umpire. Judges, he claimed, don’t fashion the law through interpretation; they are merely impartial arbiters calling balls and strikes.

If so, it just so happens that for Roberts as ump, pretty much every legal argument that has a tendency to advance the interests of the Republican Party is a pitch right down the heart of the plate.

It is Roberts who championed the court’s decisions gutting the Voting Rights Act, thereby abetting the voter suppression tactics that the GOP deploys to lower Democratic turnout, especially in communities populated mostly by people of color.

It has been Roberts leading the charge to strike down campaign finance regulations, a particular bete noire of a Republican Party eager to collect dark money. In the same vein, Roberts wrote opinions broadening the rights of corporations to steer gobs of shareholder funds to candidates while handcuffing the ability of Democratic-leaning unions to do the same.

Roberts has also led the court to play as small a role as possible in policing political gerrymandering, which the GOP has used to amplify the weight of GOP voters compared with Democratic ones.

And in the last two weeks, it’s been Roberts writing the West Virginia vs. EPA opinion limiting the power of government to combat climate change; Roberts lending his voice to striking down a modest gun control measure limiting concealed-carry; Roberts willing to hollow out Roe vs. Wade even if not voting to erase it.

These actions provided a strong foundation for claims of judicial partisanship. And the court’s accelerating partisan taint is only compounded by the irony that Roberts’ judicial agenda helped shape the political landscape that gave rise to the Trumpism that threatens his judicial legacy.

Take, for example, the Roberts-led refusal to police gerrymandering. This approach empowered state legislatures to increase dramatically the number of “safe” GOP and Democratic districts, thus shifting the selection of winners from the general election to the party primaries, where partisan voters dominate. The result has been a sharp rise in extremism and polarization, as well as legislative gridlock as centrist legislators all but disappeared. This was the political environment in which the anger and cynicism of Trumpian politics took root, which, in turn, led to the radical court over which Roberts presides.

No doubt Roberts — the justice who saved Obamacare — is genuinely dismayed by the wounds, internal and external, being inflicted on the institution to which he is devoted. The court has become a near-perfect reflection of our body politic, and more specifically, the court’s GOP appointees have come to mirror the party itself. As in politics, establishment Republicans, whom Roberts represents, have been routed by the Trump wing, represented by the now ascendant five justices meaningfully to Roberts’ right.

And yet, to understand why his legacy will now be written by others, Roberts need do little more than look to himself.

Edward Lazarus, who clerked for Justice Harry A. Blackmun, is an attorney and the author of “Closed Chambers: The Rise, Fall and Future of the Modern Supreme Court.”