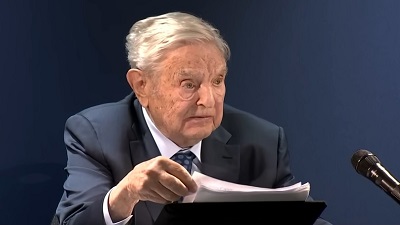 Russia’s invasion of Ukraine threatens to be the “beginning of the third world war” that could spell the end of civilisation, the veteran philanthropist and former financier George Soros has warned..

Russia’s invasion of Ukraine threatens to be the “beginning of the third world war” that could spell the end of civilisation, the veteran philanthropist and former financier George Soros has warned..

In a ferocious attack on Vladimir Putin and China’s Xi Jinping at the World Economic Forum in Davos, Soros warned that autocratic regimes were in the ascendant and the global economy was heading for a depression.

Soros, who has become a hate figure for the hard right in the US, also heavily criticised the former German chancellor Angela Merkel for cosying up to Moscow and Beijing.

With the mood in Davos already downbeat due to the war in Ukraine, Soros ramped up the gloomy rhetoric to new heights.

“The invasion may have been the beginning of the third world war and our civilisation may not survive it,” he said.

“The invasion of Ukraine didn’t come out of the blue. The world has been increasingly engaged in a struggle between two systems of governance that are diametrically opposed to each other: open society and closed society.”

The 91-year-old former hedge fund owner said the tide had started to turn against open societies in the aftermath of the 9/11 terrorist attacks on the US in 2001. “Repressive regimes are now in the ascendant and open societies are under siege. Today China and Russia present the greatest threat to open society.”

Soros, who led the speculative financial attack that drove the pound out of the European exchange rate mechanism 30 years ago, said Europe had responded well to the crisis triggered by Russia’s invasion.

“It will take a long time to work out the details, but Europe seems to be moving in the right direction. It has responded to the invasion of Ukraine with greater speed, unity and vigour than ever before in its history.”

He added: “But Europe’s dependence on Russian fossil fuels remains excessive, due largely to the mercantilist policies pursued by former chancellor Angela Merkel. She had made special deals with Russia for the supply of gas and made China Germany’s largest export market. That made Germany the best performing economy in Europe but now there is a heavy price to pay. Germany’s economy needs to be reoriented. And that will take a long time.”

Soros said Putin had won Xi’s agreement to the Russian invasion at the opening of the Beijing Winter Olympics in early February. But he insisted the Chinese leader was not as strong as he believed.

“Xi harbours a guilty secret. He never told the Chinese people that they had been inoculated with a vaccine that was designed for the original Wuhan variant and offers very little protection against new variants.”

Soros said Xi was unable to “come clean” because he was at a delicate moment in his career. “His second term in office expires in the fall of 2022 and he wants to be appointed to an unprecedented third term, eventually making him ruler for life.”

China’s lockdowns to combat Covid-19 had pushed the economy into freefall but Xi was unable to admit he had made a mistake, he said.

“Coming on top of the real estate crisis the damage will be so great that it will affect the global economy. With the disruption of supply chains, global inflation is liable to turn into global depression.”
Sign up to the daily Business Today email or follow Guardian Business on Twitter at @BusinessDesk

Contrary to general expectations, Xi may not get his coveted third term because of the mistakes he had made, Soros predicted.

“While the war rages, the fight against climate change has to take second place. Yet the experts tell us that we have already fallen far behind, and climate change is on the verge of becoming irreversible. That could be the end of our civilisation.

“Therefore, we must mobilise all our resources to bring the war to an early end. The best and perhaps only way to preserve our civilisation is to defeat Putin as soon as possible. That’s the bottom line.”