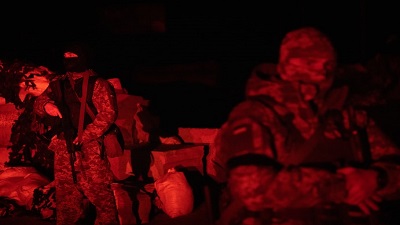 At first glance, these claims seem wildly exaggerated. World Wars I and II spanned multiple continents, while Russia’s brutal invasion of Ukraine is a war between two countries. Despite worldwide statements of support for Ukrainian forces, there has been no equivalent of England and France declaring war on Germany two days after it invaded Poland on Sept. 1, 1939. Foreign volunteers have poured into Ukraine from various Western nations, but that development is more analogous to the Spanish Civil War of 1936-1939, which was not part of World War II.

So what would World War III actually look like?

Glancing at the historical origins and discursive features of a “world war” as a concept suggests that a Third World War will only come into existence when people subjectively agree that it has. So long as the conflict remains limited to its present parameters, naming it will continue to be a partisan fight driven by fears and fantasies.

The concept of “world war” came into being even before World War I. As early as July 1914, American newspapers featured prospective claims that “unless Servia complies with the Austrian ultimatum, Europe will witness a ‘world war.’” Around the same time, Germans feared the eruption of a “Weltkrieg” and the French a “guerre mondiale.”

After the war, observers retrospectively described it with a range of terms including, but not limited to, “world war.” American newspapers were filled with references to “the recent world war” and descriptions of “world war veterans.” But English and French commentators referred more frequently to the “Great War” and “La Grande Guerre.” In postwar Russia, Lenin used the term “world war” interchangeably with the “capitalist war.” All nations, in short, described the conflict subjectively in terms that allowed them to lend it significance and meaning.

Of course, the familiar designations, “First World War” and “World War I” did not emerge until a new war was on the horizon in 1939. Yet here, too, the terms “World War II” and the “Second World War” were also coined in advance of the conflict’s eruption, with commentators widely dreading a “Second World War” in the 1930s. In fact, such fears dated as far back as 1918, when American commentators favoring a harsh peace for Germany stressed the need to keep it from obtaining the “sinews for a Second World War.”

It took some time for the phrase “World War II” to catch on. During the conflict, Europeans did not always refer to the war with any numerical designation. When Winston Churchill declared in a famous 1940 speech that “never in the field of human conflict was so much owed by so many to so few,” he did so in the context of crediting “British airmen who, undaunted by odds … are turning the tide of the World War.” Only after 1945, with the luxury of hindsight, did the phrase “World War II” become canonized in Western consciousness.

The idea of a third world war, by contrast, emerged prospectively during World War II. In 1944, a distinguished array of American and European writers and journalists, including William Shirer, Rex Stout and Emil Ludwig, founded the Society for the Prevention of World War III to pressure the U.S. government to impose a harsh peace treaty on postwar Germany to keep the nation from launching its third world war in half a century.

Similar fears were voiced after 1945. At many points during the Cold War — during the Korean War, the Cuban missile crisis and the Vietnam War — journalists expressed fears that the planet was on the brink of a third world war. When the Soviet Union invaded Afghanistan in 1980, for example, newspapers published alarmist headlines such as “This May Be World War III” and “Has World War III Begun?” In all of these cases, the invocation of World War III was meant to warn of the potential danger of regional conflicts escalating into a global catastrophe.

None of these fears, of course, were ever realized. To this day, “World War III” does not stand in any history book as an actual event, but it remains a potential nightmare.

Intriguingly enough, this gap between reality and imagination may be causally linked.

On the one hand, the constant dire warnings about World War III may have functioned to prevent such a conflict from actually occurring. On the other hand, there may be a cost to taking such a rhetorical stance. Incessantly warning of a threat that never materializes can gradually desensitize people to its potential reality.

It can also promote reckless action. In the case of Ukraine, many of the people claiming that World War III has “already begun” are driven by the fantasy that, by doing so, they can rally Western support for what they see as an inevitable showdown with Russia. But this claim, amplified by social media, entails the risk of escalating the conflict — perhaps with the use of nuclear weapons — and producing precisely what others hope to prevent.

In the end, World War III will only enter the history books as a real event in retrospect. We should obviously hope that never happens and pray the concept remains prospective. Should it take place, the devastation could be total. As Albert Einstein famously warned in 1948, “I do not know how the Third World War will be fought, but I can tell you what they will use in the Fourth — rocks!”