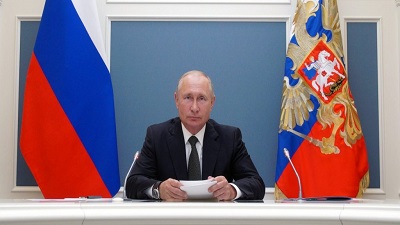 President Joe Biden took office with the idea that this century’s struggle would be between the world’s democracies and autocracies.

President Joe Biden took office with the idea that this century’s struggle would be between the world’s democracies and autocracies.

But in waging war on Ukraine, President Vladimir Putin of Russia has been driven by a different concept, ethno-nationalism. It is an idea of nationhood and identity based on language, culture and blood — a collectivist ideology with deep roots in Russian history and thought.

Putin has repeatedly asserted that Ukraine is not a real state and that the Ukrainians are not a real people, but actually Russian, part of a Slavic heartland that also includes Belarus.

“Putin wants to consolidate the civilizational border of Russia, as he calls it, and he is doing that by invading a sovereign European country,” said Ivan Vejvoda, a senior fellow at the Institute of Human Sciences in Vienna.

In this sense, argues Ivan Krastev, the war is one of recolonization, capturing lands ruled by the Russian empire and the Soviet Union.

“Even if Ukraine were autocratic, it would not be tolerated by Putin,” he said. “He’s reconsolidating imperial nationalism."

If Putin began as a “Soviet man, a red colonel,” said Krastev, a Bulgarian who is chairman of the Center for Liberal Strategies in Sofia, “He now attacks the Soviet Union as a repressor of the Russian people. For him, this is an identity war.”

For Putin’s opponents in Ukraine and the West, nations are built on civic responsibility, the rule of law and the rights of individuals and minorities, including free expression and a free vote.

“What Russia is doing is not just making war against an innocent nation here,” said Timothy Snyder, a professor at Yale who has written extensively about Russia and Ukraine, but attacking assumptions about a peaceful Europe that respects borders, national sovereignty and multilateral institutions.

“The Russian leadership is deliberately undoing the linguistic and the moral structure that we drew from the Second World War,” he said.

Underlying the war is a clash of political systems, “a war against liberal democracy” and Ukraine’s right to self-determination, said Nathalie Tocci, the director of Italy’s International Affairs Institute. But that is just part of a larger conflict, she said, as Putin tries to change the meaning of what it is to be sovereign.

“He’s going back to a dangerous, irredentist and ethnic nationalist view of sovereignty and self-determination,” Tocci said.

Vejvoda, who is a Serb, notes that the concept of ethno-nationalism is one that former Serbian leader Slobodan Milosevic manipulated as well, asserting that the old Yugoslavia repressed Serbian identity and ambitions. While Milosevic used such arguments in a cynical fashion, Putin seems to have imbibed them wholeheartedly.

The idea of Russia as a separate civilization from the West with which it competes goes back centuries, to the roots of Orthodox Christianity and the notion of Moscow as a “third Rome,” following Rome itself and Constantinople. Snyder has examined the sources of what he has called a form of Russian Christian fascism, including Ivan Ilyin, a writer born in 1883, who saw salvation in a totalitarian state led by a righteous individual.

Ilyin’s ideas have been revived and celebrated by Putin and his close circle of security men and allies like Yuri Kovalchuk, who was described recently by Mikhail Zygar, the former editor of the independent news channel TV Rain, as “an ideologue, subscribing to a worldview that combines Orthodox Christian mysticism, anti-American conspiracy theories and hedonism.”

Putin has been similarly taken by the ideas of Lev Gumilyov, a Soviet-era historian and ethnologist who promoted “Eurasianism” as an antidote to European influence, and Aleksandr Dugin, who has advanced that notion to promote an ultranationalist view of Russia’s destiny as a conservative empire in perpetual conflict with the liberal Western world. Their histories have been described notably by Charles Clover in his book, “Black Wind, White Snow: The Rise of Russia’s New Nationalism.”

Dugin, who has long pressed for the reabsorption of Ukraine, is sometimes called “Putin’s philosopher.” In 2014, Dugin said: “Only after restoring the Greater Russia that is the Eurasian Union, we can become a credible global player.” The Ukrainian revolt against Russian influence that year he called “a coup d’état by the United States,” a Western attempt to stop “the advance of Russian integration.”

But if Putin once seemed to use such views cynically to fill the ideological hole left by the collapse of communism, he now seems to have absorbed them — and acted upon them.

There is prepared soil for such ideas in Russia, which has been torn for centuries between “Westernizers” and those who see the West as a cancer — alien, decadent, insidious and threatening.

Western Europeans coped differently with their own failed empires, combining their weakened nation-states into the European Union, in part to constrain aggressive nationalism.

“The European Union was the transformation of empires that failed, desperate to find something new,” said Pierre Vimont, a former French ambassador to the United States now at Carnegie Europe — something safer and less prone to war.

Putin’s concept of a nation is an ethnic and autocratic one, in contrast to the Western idea of a multicultural state built on civic responsibility, the rule of law and individual rights. To be an American, many have suggested, it is necessary simply to swear allegiance to the flag, obey the law and pay your taxes.

Efforts to more narrowly define what it is to be a “true American” have fed into a far-right populism, and in former President Donald Trump’s praise of Putin there are elements of identification with a strong leader defending “traditional” — and restrictive — definitions of national belonging.

But as with the far right in European countries like Germany, France and Italy, association with Putin now, during his war of aggression in Ukraine, is an embarrassing reminder of where such views can lead.

China, the other great autocracy in the Biden formulation, is built on similar ideas of ethnic nationalism — that all Chinese are part of the same nation, that minorities like the Uyghurs are inferior or dangerous, and that Taiwan’s separation is illusory, a crime of history that must be repaired.

Even India, a great democracy, has been pushed into ethnic nationalism by Prime Minister Narendra Modi, with his Hindu ascendancy. In Turkey, President Recep Tayyip Erdogan has re-created historical tales of the Ottoman Empire while acting in solidarity with Turkic-speaking peoples in Azerbaijan, Nagorno-Karabakh and in Central Asia.

In Europe, too, Viktor Orban, the Hungarian prime minister, has promoted Hungarian identity and nationalism despite censure from Brussels. He has handed out Hungarian passports to ethnic Hungarians in Romania and other countries, who are allowed to vote in Hungary, giving him, so far, an electoral edge. But Orban faces parliamentary elections next month, and his long, close relations with Putin have hurt him politically, even as he has moved quickly to support European Union sanctions on Russia and welcome Ukrainian refugees.

Putin’s ethno-nationalist war has not gone particularly well, apparently to his surprise, unfolding as a bloody slog rather than a swift triumph. Casting it as a civilizational war creates all kinds of difficulties for Russian invaders — after all, if Russians and Ukrainians are one people, as Putin insists, they are firing on their brothers and sisters.

“It’s not easy for those kids to kill Ukrainians, who share the language and look like them,” Krastev said. “It was easier with the Chechens," the non-Slavic people of the Caucasus whom Russia has been fighting since Catherine the Great.

Putin’s great disappointment, said Krastev, was to discover that Russian speakers in Ukraine fought his forces. Even his favorite Ukrainian oligarchs, like Rinat Akhmetov and Dmytro Firtash, “have suddenly discovered Ukrainian-ness.”

Putin has also worked to build a more militaristic society, based on Russia’s pride in its defeat of Nazi Germany in what is called “The Great Patriotic War.” But now Ukraine, which also fought and suffered under the Nazis, is using the same tropes against the invading Russians. For Ukraine, Krastev said, “this is their Great Patriotic War.”

Putin has done more to build Ukrainian nationhood than anyone in the West could have done, Krastev said.