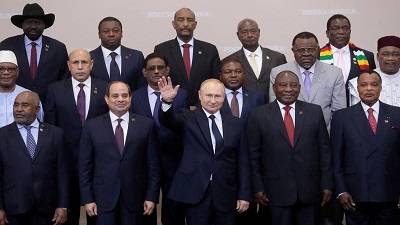 The reaction to Russia's war in Ukraine across Africa has been mixed, from direct condemnation to tacit support.

The reaction to Russia's war in Ukraine across Africa has been mixed, from direct condemnation to tacit support.

The conflict has highlighted how many states are seeking to balance relations between Moscow and Washington and experts say there has been nervousness about direct criticism of Russia.

But many countries – including regional powers like Kenya and Ghana – have said they are deeply concerned about the use of force to project national security interests that could create a troubling precedent in the historically conflict-riven continent.

Experts say that Russia hasn’t succeeded in undermining traditional western influence in Africa, whose political dynamics are mostly the product of internal forces and individual decisions.

“There is no longer a single African position on Russia as a global power or player,” Paul Stronski, a senior fellow at the Russia and Eurasia Programme, Carnegie Endowment for International Peace, told The National.

Only one African country, Eritrea, voted with Syria and North Korea to oppose a United Nations General Assembly resolution on March 2, which decried the invasion and reaffirmed Ukrainian sovereignty and independence.

At a UN emergency session in New York last week, 141 of the 193 member states backed the motion condemning Russia’s decision to go to war with Ukraine.

China and 34 others abstained from the vote. The abstainers included 16 countries from the 54-member Africa group of nations. Seven out of 12 African countries did not vote at all.

“What is notable is that many African states, including a few with good ties to Russia, such as Egypt for example, voted for the UNGA resolution that condemned Russia. Powerful and influential regional powers, like Kenya, Ghana and many others, all voted to condemn Russia too,” Mr Stronski said.

He argues that Russia’s engagement with Africa is more symbolic and centres around certain countries as opposed to cultivating broader efforts across the region in a global push away from a western-dominated, unipolar world.

Since Vladimir Putin became president in 2012 after a four-year stint as prime minister, post-Soviet Russia has sought to advance its interests in some African countries and the Middle East as part of its efforts to expand its global footprint.

In 2019, Mr Putin held a summit in the resort city of Sochi with more than 40 African leaders and told them that Moscow could offer help without the strings he said came with help from the West.

On the same day as the Russian assault on Ukraine, one of Sudan’s most powerful generals, Mohamed Hamdan Dagalo, met Russian Foreign Minister Sergei Lavrov in Moscow.

The head of Sudan’s paramilitary Rapid Support Forces said after the meeting that both countries had agreed to deepen ties in agriculture, mining, manufacturing, and oil and gas.

It is a fraction of Sudan’s annual need of 1.5 million tonnes but experts believe such actions were an unmistakable gesture from Russia as it seeks to strengthen new relationships in the face of growing isolation. It is doing so mainly in Central Asia and the Far East, outside of its geographical sphere and colonial past.

“We’ve seen this before. After the West imposed its initial sanctions in 2014 after the Russian annexation of Crimea, Russia did a similar thing. Russian efforts to cultivate African states increased dramatically – to highlight that isolation from the West did not mean isolation from the world,” Mr Stronski said.

The pursuit of international support is mutual. Sudan’s generals are also on the hunt for global backers after last year’s military takeover and the ousting of the civilian-led government, which promoted the US, the European Union and major financial institutions to withhold billions in financial aid.

Russia has also been lobbying in Sudan for several months to secure a military base on the Red Sea, local media have reported.

Moscow has a presence in Guinea, where Russian companies are involved in gold mining. In the Central African Republic, Russian mercenaries are reportedly fighting rebels who oppose the government, while protecting diamond and gold deposits.

Russia has sought to deepen ties with Mali since a coup in the West African nation last year. In December, hundreds of mercenaries linked to Russia’s private paramilitary Wagner Group arrived in Mali, French and US security officials said.

Malian authorities denied the presence of Wagner forces and said the Russians were part of a contingent of military trainers in the country.

Balancing act in the crisis

Kenya, one of the largest economies in Africa, has been clear on its stance over Russia’s invasion of Ukraine even before troops crossed the border on February 24.

The country’s ambassador to the UN, Martin Kimani, rejected Russia’s recognition of two breakaway regions in Ukraine, and he called the invasion an “act of war”.

Kenya said the Russian military action had triggered trauma and oppression of the colonial past in Africa.

“The humanitarian crisis in Ukraine is unnecessary and I reiterate Kenya’s recognition of Ukraine’s inviolable right to sovereignty, territorial integrity and political independence,” Mr Kimani told the UN Security Council the day before the UN General Assembly vote.

He condemned what he described as the “racist treatment” of Africans barred from fleeing the conflict, which is “damaging the spirt of solidarity needed today”.

But the Kenyan diplomat gave a warning that the growing international sanctions against Russia might be tantamount to collective punishment given the dire consequences and domino effect on other economies worldwide.

The invasion has caused a wheat crisis and prices have soared to a record high as the war has slowed agricultural exports from Russia and Ukraine, known as the Black Sea breadbasket. The two countries typically provide a quarter of global wheat exports as well as large volumes of corn, barley and vegetable oil.

Egypt voted to condemn Russia’s invasion despite it relying on the country for wheat and other food imports. Strident criticism of Moscow’s policies may make it harder to secure supplies in the event of disruption to Ukrainian wheat exports given that the Russian government has made a list of "unfriendly" countries that mean commercial deals will require an official review.

Egypt is, like many countries in the region, in a tight spot as it is also keen on maintaining its security relationship with the US and trade links with Europe.

It is attempting a balancing act in this crisis, says Hamish Kinnear, North Africa and Middle East analyst at Verisk Maplecroft, a specialist in global risk analytics.

“Egypt voted to endorse the March 2 vote condemning Russia, for example, but qualified this by stating that it ‘rejects the exploitation of economic sanctions outside the multilateral international mechanisms’. This is, in effect, a veiled criticism of Western sanctions on Russia as UN Security Council sanctions, the chief multilateral mechanism, would be vetoed by permanent council member Russia,” Mr Kinnear told The National.

But more surprising, he said, was Morocco’s decision to avoid taking part in the vote despite being designated a major non-Nato ally by the US as an illustration of their close relationship.

“The focus on the vote on territorial integrity, and Morocco’s heightened sensitivities over its claim to Western Sahara, was the likely motivation,” said Mr Kinnear.

But despite the major fight with Russia in Ukraine, it’s wrong to analyse entire continents through a US-Russia lens all the time, says Brian Katulis, who advised US policymakers on foreign policy and provided expert testimony several times to congressional committees.

He does not agree with the analysis that America’s foreign policy is a direct result of Russia’s expanding role in Africa.

“I think this overstates Russia's influence and power and potentially understates the role that countries like China and some European countries play in Africa,” Mr Katulis, vice president of policy at the Middle East Institute, told The National.

“If there is a vacuum in some countries in Africa, it is there due to the lack of poor governance by the governments of those countries, not the United States,” he said.