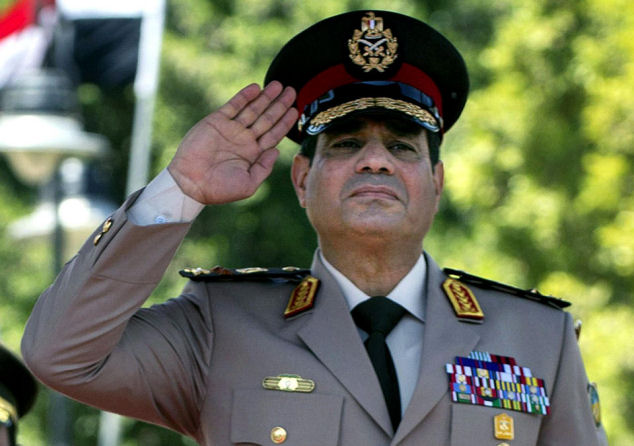 Now that military strongman Abdel Fattah al-Sisi has declared his intention to run for Egypt’s presidency, he should keep something in mind: Both Hosni Mubarak and his successor, Mohammed Morsi, weren’t only ousted from the country’s highest office because they suppressed political and constitutional rights. They also fell because fitful economic reforms  failed to address poverty and near-poverty (affecting about 50 percent of the population), high unemployment (13-plus percent), extremely high youth unemployment (25-plus percent), and unchecked inflation (11-plus percent).

Now that military strongman Abdel Fattah al-Sisi has declared his intention to run for Egypt’s presidency, he should keep something in mind: Both Hosni Mubarak and his successor, Mohammed Morsi, weren’t only ousted from the country’s highest office because they suppressed political and constitutional rights. They also fell because fitful economic reforms  failed to address poverty and near-poverty (affecting about 50 percent of the population), high unemployment (13-plus percent), extremely high youth unemployment (25-plus percent), and unchecked inflation (11-plus percent).

Sisi may meet the same fate—and for the same reasons—when he leaves his shadowy existence as the country’s puppet master to run for president later this year. In fact, his chosen prime minister, Hazem al-Beblawy, a moderate economist appointed in July 2013 after the army deposed Morsi, resigned in February due, in part, to economic distemper: fuel shortages, power cuts, and rolling strikes.

The slogans of the Tahrir Square revolt—now a seeming eon ago in January 2011—expressed Egyptians’ desire for a new political and economic order: “bread, freedom, and social justice.” Egypt’s unfulfilled and incomplete revolution has always been as much about resolving economic conflicts as constitutional dilemmas. It’s been about finding a balance among Egypt’s many diverse interests: secular and religious, Islamist and Christian, rich and poor, military and civilian, professional and day laborer. And that includes navigating between those supporting a competitive market economy and those backing statist capitalism with a large government bureaucracy and ample subsidies for food and energy.

The military played an essential role in the downfall of Mubarak and Morsi. But it has always portrayed itself as above politics and economics, even though its influence on both has been significant. After Mubarak relinquished power, it governed for an interim period until elections produced Morsi’s Muslim Brotherhood-controlled government. After the army overthrew Morsi, Sisi installed a nominal civilian government while exerting power behind the scenes, not least in the brutal killings of Islamist protesters and the suppression of dissidents through the various mechanisms—violence, arrests, media control—of the security state.

In its economic dealings, the military prefers a shadowy presence as well. Under the constitution, its budget has not been subject to parliamentary oversight. It has historically been involved in economic enterprises of all shapes and sizes (from roads to housing to consumer goods to resort development to oil and gas), and operated under its own set of rules (no payment of taxes, limited public audits, shortcuts in procurements, cheap land, conscript labor, corrupt payoffs). When officers retire, they often find well-paying jobs in businesses created or controlled by the army. Nonetheless, there are no “official” statistics on the extent of the military’s involvement in the economy—with army spokesmen claiming these activities only account for 1 percent of GDP and other estimates pegging that figure at closer to 40 percent (or more).

But if, as expected, Sisi becomes president, he and the military will have no choice but to directly confront Egypt’s economic dilemmas. The most critical question they will face is whether and how to advance the market reforms, begun under President Anwar Sadat in the 1970s and continued under Mubarak, that encourage competition, free trade, foreign direct investment, and modernization in sectors such as banking, finance, real estate, telecommunications, transportation, and healthcare. Can these reforms lead to economic growth and especially jobs for a burgeoning youth cohort? Can they move beyond crony capitalism by benefiting the middle class and poor rather than just the elite? Can they transform Egypt’s fiscal profile, diverting public funds toward investments in economic growth and away from the government bureaucracy and food-and-energy subsidies? (Twenty-five percent of Egypt’s budget goes to public-sector salaries and 50 percent to debt service and subsidies.) And are such reforms possible in a fragile political climate? After all, transitioning to a growing, competitive economy will doubtless prove unpopular as subsidies are lowered, bureaucracy cut, and efficiencies implemented.

The military, for its part, has generally been skeptical of economic liberalization because it threatens the institution’s influence in Egypt’s statist economy. Indeed, some observers argue that the country’s generals allowed Mubarak to fall because they did not want his son Gamal—a proponent of economic reform but also a symbol of crony capitalism—to succeed his father.   Initially, in 2012, Morsi was prepared to advance economic reform in order to stimulate growth and secure $4.8 billion in aid from the International Monetary Fund (and more than $6 billion in follow-on assistance from the EU and U.S.). This IMF assistance was conditioned on Egypt taking painful measures such as reducing energy subsidies, trimming the state bureaucracy, instituting a sales tax and more progressive income tax, and investing in infrastructure. But, facing strong opposition to the IMF deal and the “foreign influence” that would come with it, Morsi quickly backed away from the agreement.

Today, the Egyptian economy is in as much distress as it was when Morsi took office. Not only are rates of poverty, inflation, and unemployment high, but GDP growth is sluggish, the budget deficit is yawning, tourism is down, the need for imported fuel is great, and public debt (both foreign and domestic) stands at $268 billion, or 107 percent of GDP.

Under Sisi, the military has sought to restore order and stability in the country, which can contribute to economic growth. But the violent, heavy-handed way in which it has done so has created its own instability, fueling terrorism by underground Islamic groups and anger among some of those who went to Tahrir Square to protest these very police-state methods. In a reflection of these security concerns, 5 million fewer tourists visited Egypt in 2013 compared with 2010, as revenues from tourism declined from $12.5 billion to $5.8 billion.

Egypt’s generals have also abandoned assistance from the IMF, EU, and U.S., instead turning for financial aid to Arab neighbors who viewed the Brotherhood as a destabilizing force and supported its overthrow. They’ve secured pledges of $7 billion from the United Arab Emirates, $5 billion from Saudi Arabia, and $4 billion from Kuwait. But these funds are not explicitly conditioned on any economic reforms. The UAE’s initial funding was used to buttress Egypt’s dwindling foreign-exchange reserves and protect its currency. And some of the other money is nominally slated to finance stimulus and infrastructure projects, in part through military-linked companies.

In announcing his candidacy on Wednesday, Sisi said that Egypt’s current reliance on “donations and assistance” was “unacceptable,” while steadfastly refusing to disclose any details about his programs or policies. It is far from clear whether the military will agree to reforms that threaten the economic privileges and sinecures it has secured through its version of state capitalism.

As president, rather than puppet master, Field Marshal Sisi will grapple with Egypt’s economic challenges in a far more exposed way. And, as was the case for the country’s past two presidents, these profound and prolonged problems could be his undoing—no matter how strong his security state.