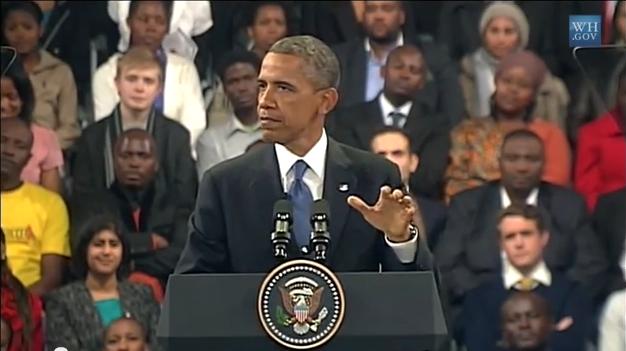 When Robert Kennedy declared at Cape Town University in response to Nelson Mandela’s imprisonment that the world must “build a current which can sweep down the mightiest walls of oppression and resistance”, he could not guess that five decades later a black president would stand on the same spot.

Visiting South Africa last week, Barack Obama declared that the “current” that would finally bring “light where there is darkness” across Africa would be an electric current in the form of US support for a continent-wide plan of energy for all.

When Robert Kennedy declared at Cape Town University in response to Nelson Mandela’s imprisonment that the world must “build a current which can sweep down the mightiest walls of oppression and resistance”, he could not guess that five decades later a black president would stand on the same spot.

Visiting South Africa last week, Barack Obama declared that the “current” that would finally bring “light where there is darkness” across Africa would be an electric current in the form of US support for a continent-wide plan of energy for all.

The American President was announcing his Power Africa initiative. Its goal is to bring electricity to 20m households in Sub-Saharan Africa. It is funded to the tune of $7bn (£4.59bn) in public US investment, combined with another $9bn from the private sector. The aim is to build a new partnership with Africa based on trade, with support promised from US-based General Electric and $2.5bn from Tony Elumelu, the Nigerian banker.

The need for this initiative is obvious: Africa, a sixth of the world’s population, produces only 4pc of the world’s generated power. The 800m people of Sub-Sahara generate the same amount of power as Spain.

Africa, as a whole, produces 37MW per 1m people, while the developed world generates 326MW. Two-thirds of Sub-Saharan Africans are without electricity, yet they are living in a region where the economy is growing at 6pc.

According to the International Energy Agency, more than $300bn will be invested in Africa between now and 2030 to ensure universal electricity access.

With the continent boasting six of the 10 fastest-growing countries in the world, this initiative will accelerate growth. Over the past decade, the simple, unweighted average of global growth rates was virtually identical in Africa and Asia. Over the next five years, Africa is likely to take the lead.

In other words, the average African economy will outpace China. Charles Robertson, global chief economist of Renaissance Capital, estimates that Africa’s GDP will increase from $2 trillion to $29 trillion in today’s money by 2050. Consequently, Africa will produce more GDP than the combined economies of the US and eurozone do today.

Energy is a vital part of this equation.

At present, working hours lost due to power outages are double those in emerging economies such as India and triple those in South America. With a 16pc increase in power generation, Africa’s GDP can grow by 10pc.

It was to ensure that Africa’s growth was underpinned with infrastructure development that a team of us set up the Made In Africa Foundation with Nigerian oil and gas magnate, Kola Aluko, and Atlantic Energy in 2011. The foundation was to act as an advocate for the importance of roads, rail, clean water, decent homes and energy in Africa and to formalise the work begun by our commercial group, Made In Africa Ltd.

At the beginning of this year, with assistance from Bono’s charity, One.org, we worked on the prototype initiative for energy development, which our CEO, Chris Cleverly, coined “Power Africa”.

This is a programme designed to, as Mr Obama announced in Cape Town, “plug Africa into the grid of the global economy”.

This is the key: Africa’s growth means global growth – it means growth in Britain for our financial institutions as well as our builders. It is only when Africa is part of the global system that the world economy can reach its full potential. These developments are symbiotic.

The peoples and continents of the world are not separate, they are part of the same social and economic system. Europe, Asia, the Americas and Africa are like four horses pulling a carriage. Starving one horse may mean that the others are fuller but the carriage won’t get anywhere fast. We started Made In Africa in 2006, at a time before Africa’s emergent growth was clear and before social enterprise was common parlance. With such a high risk of business failure in that environment, we believed launching any legitimate business in Sub-Sahara was more altruistic than a hard-headed business decision.

We knew that the biggest risk in Africa’s main interests — agriculture and real estate — was lack of infrastructure to get supplies in and out and ensure clean water and electricity was readily available.

We began an uphill struggle to convince development agencies, such as the Department for International Development, that there was little point building hospitals and schools without adequate electricity or if the children had to walk five miles every morning to get an education. It was as much a palliative move as distributing mosquito nets without fixing the sewage system. Great for the net manufacturers and the aid industry, but not a long-term solution for Africa.

By 2009, Gordon Brown and David Miliband, then PM and foreign secretary respectively, were supporters of this approach. Mr Miliband asked us to draft a “white paper”, in which we suggested that by using part of Britain’s huge aid or export trade budgets we could ensure a Triple A credit rating guarantee for projects.

Instead of just spending money piecemeal, Britain could create a multi-billion dollar facility to support consortia of constructors, consultants and engineers to build the much-needed infrastructure of Africa and give Britain a significant growth opportunity. The way out of financial crisis is not so much by cutting costs as by increasing your sales.

Just as Labour “got it” they lost the election. Such is the short-term political world we have to deal with. By 2012, Britain had lost its own AAA credit rating but fortunately, the AAA-rated African Development Bank (AfDB) made infrastructure its main priority and launched a plan to create a $22bn bank guarantee to support $70bn of infrastructure spending.

The AfDB agreed earlier this year to work with our foundation to raise funds for the feasibility studies on road, rail, urban regeneration, water and energy projects.

Last month, Britain recognised the importance of what is happening.

David Cameron said: “Let’s back Africans on infrastructure. They have a point when they say it was largely designed in another era and primarily focused on getting products out of the continent rather than promoting trade within it. So let’s get behind (AfDB) President Kaberuka’s work.”

But words are not enough; Britain must leverage the unique and historic ties that it has with Africa, helping Britain itself to grow back to economic health.

An example is the work of the housebuilder Comer Group. With the leadership of an influential Ugandan prince, Hassan Kimbugwe, and Made In Africa, the business won an international tender to develop 160 acres of central Kampala, the capital of Uganda.

That, in microcosm, is the opportunity that is being recognised by Mr Obama and elsewhere and should be understood here.

Bespoke tailor Ozwald Boateng is a founder of Made in Africa