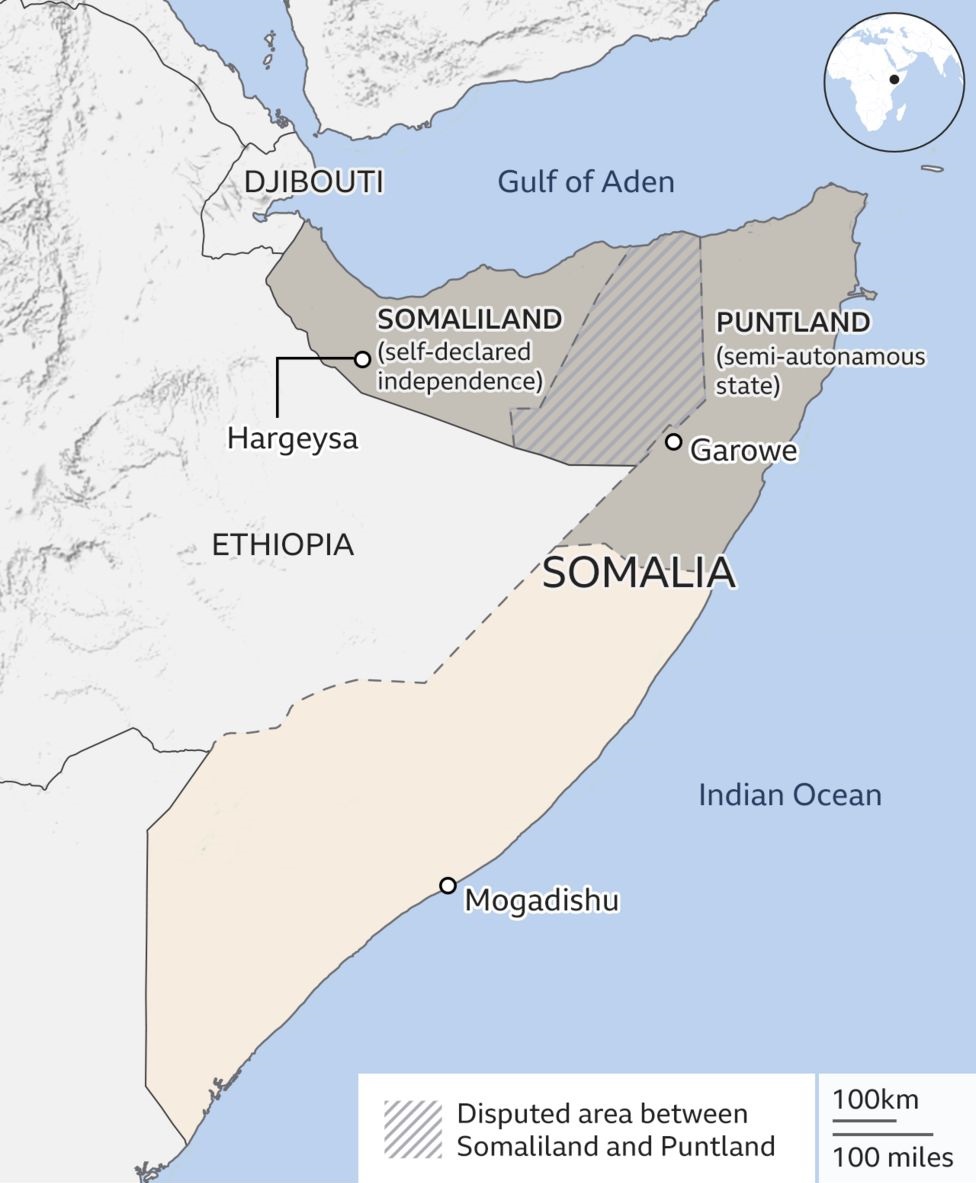 People in Somaliland are hoping that Monday's elections will boost the breakaway republic's chances of gaining international recognition as an independent state, writes BBC Horn of Africa analyst Mary Harper.

Somaliland is located in a highly strategic position in the world. It is a gateway to the Gulf of Aden and the Red Sea. (Image/AFP)

People in Somaliland are hoping that Monday's elections will boost the breakaway republic's chances of gaining international recognition as an independent state, writes BBC Horn of Africa analyst Mary Harper.

"I cannot wait to cast my vote," says 15-year-old Yasmin Abdi. "I feel like a proper grown-up now, almost like I own part of my country."

Eligible to vote in a society where 15-year-olds are considered to have reached adulthood, Ms Abdi is exactly half the age of Somaliland, which celebrated its 30th birthday on 18 May.

Since declaring independence from Somalia it has not been recognised internationally but functions like a nation state - with its own passport, currency, flag, government and army.

"Somaliland could well end up as the only place in the Horn of Africa that has any form of democratic election at all this year," says the director of the Rift Valley Institute, Mark Bradbury.

The vice-chairman of the governing Kulmiye party, Ahmed Dheere, echoes Mr Bradbury's sentiments. "I cannot tell you how important these elections are," he says. "We will be the sunshine of the Horn of Africa if we have successful polls."

Somaliland might be more democratic than some other countries in the region, but its system is far from perfect.

The parliamentary poll is more than 10 years' late. Municipal elections, which will be held at the same time, should have taken place four years ago.

A senior member of the opposition Waddani party, Hersi Ali Haji Hassan, blames the MPs for the delays.

"Many parliamentarians are greedy and selfish. They have grown fat during their 15 years in the house and are hugely reluctant to give up their seats. I also blame the government because it has benefitted from the status quo."
Journalists detained

There are other problems too. Somaliland's House of Representatives has no members from minority clans and only one woman out of 82 MPs, although more are running this time.

Five opposition candidates were arrested in the run-up to the vote. Government attitudes towards the media are hardening, with journalists harassed and arrested, and media houses shut down.

Efforts have been made to prevent political parties from becoming too closely associated with individual clans, with only three allowed to compete in legislative elections.

But the chairman of the Justice and Development party, Faisal Warabe, warns that clannism continues to pose a danger.

"Our tribal system is not compatible with democracy. We have to dismantle it. Otherwise Somaliland will end up like Yemen, with competing clans tearing themselves and their country apart," he says.

Mr Warabe wants to abolish the House of Elders or guurti, which is made up of senior members of Somaliland's all-important clans.

"The same people have been there since 1993, and when one clan elder dies he is replaced by his son. This is not democratic," he says.

It is hard to compare the situation in Somaliland with that of Somalia.

"For all its limitations, Somaliland [as far as its people are concerned] is a million miles away from Somalia, which continues to insist we are part of its territory yet is unable to hold even indirect elections," says Abdi Ahmed, a student at the University of Hargeisa.

The country is now stumbling towards a much delayed and complex process involving clan elders that should eventually lead to MPs electing a new president.

When Mr Farmajo recently tried, and failed, to extend his mandate by two years, the security forces split, some supporting the president, others the opposition.

Different factions took over different parts of the capital, Mogadishu, and there was a brief outburst of intense violence.

Some may find it bizarre that a country that does not officially exist is about to hold its seventh election since breaking away from Somalia, a country that has not held a democratic poll for more than 50 years - shortly before Siad Barre seized power in a coup in 1969.
Foreign flags fly in Somaliland

While Somalia has been torn apart by clan warfare and Islamist violence for three decades, Somaliland has been largely peaceful.

It has also been able to hold closely fought elections, the most dramatic in 2003 when Dahir Riyale Kahin won the presidency by a few hundred votes or about 0.01%.

Somaliland's last presidential poll was held in 2017. As presidents can serve for two five-year terms, the next election is due in 2022.

Somaliland's 30-year quest for recognition has so far fallen on deaf ears.

Foreign powers argue that Somaliland's status should be decided by the African Union, which is reluctant to see states breaking up in case it set a precedent on a continent where borders were set by colonial powers.

But despite the fact that it does not officially exist as a country, Somaliland is attracting growing interest from different parts of the world.

The number of foreign flags flying in the capital, Hargeisa, is increasing as more countries open consulates or representative offices.

These include Djibouti, Ethiopia, Turkey, the UK, Denmark, the United Arab Emirates (UAE) and Taiwan, which sees itself as Somaliland's "brother" as both share an unrecognised status.

Kenya, which has been involved in a long-running row with Somalia, and Egypt plan to open them soon.

Why this growing interest?

Somaliland is located in a highly strategic position in a difficult part of the world. It is a gateway to the Gulf of Aden and the Red Sea.

It is no surprise that the USSR built a four-kilometre runway, one of Africa's longest, at the port of Berbera in order to counter US influence during the Cold War.
UAE strikes port deal

Perhaps the turmoil in Ethiopia will make Somaliland even more attractive to foreign powers, serving as a rock of relative stability in a highly volatile region.

There is also the economic potential.

In 2016, the UAE signed a 30-year deal worth nearly $500m to develop and manage Berbera port, which has been described as the "Horn of Africa's most valuable real estate".

A road is being built linking Berbera with Ethiopia, offering the landlocked country an alternative to the congested port in Djibouti.

Somaliland is rich in livestock - its fat-tailed sheep and camels are prized in Gulf states.

Millions of animals are exported every year, camels winched up through the air onto ships as sheep and goats flood into them from below.

The territory has other natural resources, including untapped oil reserves, coal and gemstones. The sea off its long coastline is abundant with fish.

Some are perhaps a little bit too optimistic about what these elections will do for Somaliland.

"If we get this right, we think we will be recognised," he says.