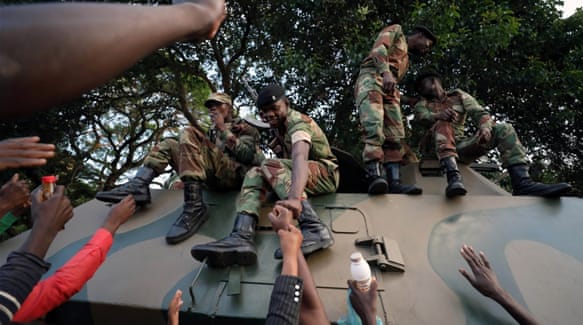 By tacitly supporting a de facto coup in Zimbabwe, the AU has damaged the region's efforts to end politics by force.

By tacitly supporting a de facto coup in Zimbabwe, the AU has damaged the region's efforts to end politics by force.

For the first time in more than two years - the longest stretch since the late 1950s - a coup d'etat rocked a country in Africa. Late on the evening of November 14, the Zimbabwe military seized control of the capital, Harare, and placed President Robert Mugabe under house arrest.

The coup was vehemently denied as such by its perpetrators, but the military's doublespeak could not alter the reality: after 37 ruinous years in power, Zimbabwe's liberator-turned-dictator faced an ignominious exit at the hands of his comrades.

Surprisingly, the coup also confounded the African Union and threatened to damage one of its major policy successes since its founding in 2002 - zero tolerance for unconstitutional changes of government out of the barrel of a gun. Why, in contravention of its anti-coup dictum, did the AU accept the coup in Zimbabwe? What implications will this have for ending politics by force in Africa?

For decades, coups - in which a faction within government uses its partial control of the state apparatus to (forcibly) remove the ruler from power - wrought havoc in countries across Africa, undermining democracy, fomenting instability and civil war, and impeding economic growth. Between 1950 and 2010, 169 coup attempts took place in Africa, of which 51.5 percent were successful (pdf). For most of this period, the continent's coup epidemic was exacerbated by The Organization of African Unity's (OAU) capital city rule, whereby whoever controlled the capital, no matter how he/she came to power, was recognised as the sovereign representative by other states.

As events played out in Zimbabwe, the African Union faced a conundrum: condemn the coup and the ZDF's de facto seizure of power but be seen (once again) to be shielding Mugabe from his political reckoning; or accept the ZDF's military intervention to absolve Zimbabwe - and the African Union - of Mugabe's dictatorial reign, though at the risk of legitimating the use of force in politics.

African regional organisations and their member states only began to shed their indifference to forcible seizures of power and to rethink the capital city rule around 1996-1997, after coups in Burundi and Sierra Leone toppled elected governments and destabilised conflict management efforts. This resulted in the landmark Lome Declaration by the OAU in 2000, in which African states collectively denounced coups as grave threats to peace and democracy on the continent.

The founding of the African Union (AU) in 2002 consummated the renunciation of the capital city rule. The AU's Constitutive Act included a provision to decertify governments that come "to power through unconstitutional means". The AU empowered its Peace and Security Council (PSC) - the key enforcement organ of the regional organisation - to use sanctions and suspensions to police unconstitutional changes of government. Over the last fifteen years, the AU has suspended no fewer than 11 member states when groups within violated its anti-coup rule. Moreover, the PSC has been quick to sanction such transgressions, usually acting within 24 to 48 hours of a coup.

Despite these gains, there are significant loopholes in the AU's anti-coup regime. For one, anti-incumbent forces can still use coups to unseat rulers; it is just less viable for coup perpetrators to accede the throne and gain sovereign recognition. Two, the AU has been much weaker in holding incumbents to account for undermining constitutionalism than their rivals who try to seize power via coups d'etat. This imbalance is not due to a lack of rules but a lack of will. The AU, in the 2007 African Charter on Democracy, Elections and Governance, empowered the Peace and Security Council to police incumbent "infringements on the principles of democratic change of government" (Article 23, Section 4) as it would coups (Article 23, Section 1). Yet, not once has the AU invoked Section 4 - despite innumerable incidences of incumbents transgressing principles of democratic change of government.

The contradictions plaguing the AU's regime of constitutionalism were laid bare in Zimbabwe over the last fortnight when a power-struggle within the ruling party exploded into a pitched battle for control of the executive. The Zimbabwe Defence Forces, responding to the dismissal of one of its key allies, former Vice President Emmerson Mnangagwa, direct threats to its Commander, Constantino Chiwenga, and fears of losing even more power and influence if Mugabe's wife, Grace, succeeded the 93-year old president, launched "Operation Restore Legacy" to eliminate its rival faction and assume de facto power.

After years of turning a blind eye to President Robert Mugabe's subversion of democracy, the AU was staring at a situation in which a coup had the potential to usher in a political transition in Zimbabwe that was popularly supported domestically and in the region. Moreover, quite shrewdly, the ZDF avoided crossing the AU's red line of seizing executive power - instead deferring to formal, constitutional procedures for the removal and replacement of Mugabe as president.

A sounder approach would have been for the AU's Peace and Security Council to condemn the de facto coup - as it would a de jure coup - and threaten to suspend Zimbabwe from the African Union until the military released Mugabe from house arrest, handed over power to a transitional post-Mugabe government, and returned to the barracks.

As events played out in Zimbabwe, the African Union faced a conundrum: condemn the coup and the ZDF's de facto seizure of power but be seen (once again) to be shielding Mugabe from his political reckoning; or accept the ZDF's military intervention to absolve Zimbabwe - and the African Union - of Mugabe's dictatorial reign, though at the risk of legitimating the use of force in politics.

In stark contrast to the Peace and Security Council's immediate and forceful rejection of nearly every other coup since the AU was founded in 2002, the African Union tacitly supported the forcible removal of Mugabe from power - a position that the Southern African Development Community (SADC), which the AU was happy to defer to in managing the crisis, also held. To justify its inaction, the AU ultimately declared the ZDF intervention did not constitute a coup d'etat, after at first suggesting the opposite.

The African Union, in alignment with SADC, got it wrong and missed a valuable opportunity to strengthen and expand its anti-coup regime to include both de jure and de facto coups. In narrowly focusing on the removal of the sitting head of state as the defining feature of a coup rather than the unconstitutional use of force to coerce elected leaders to relinquish power, it sets a dangerous precedent that threatens to undermine the strong gains the region has made to move beyond politics by the gun.

A sounder approach would have been for the AU's Peace and Security Council to condemn the de facto coup - as it would a de jure coup - and threaten to suspend Zimbabwe from the African Union until the military released Mugabe from house arrest, handed over power to a transitional post-Mugabe government, and returned to the barracks. Such a policy response would have delivered a similar outcome as what transpired - ridding Zimbabwe and the AU of the Mugabe problem - while strengthening, rather than weakening, the region's anti-coup norm. Instead, the AU endorsed a factional coup by the Zimbabwe military and its former vice president, Mnangagwa, that now sees the coup perpetrators in key positions in the post-Mugabe government in direct contravention of the African Charter on Democracy, Elections and Governance.

There is another important lesson for the AU from the Zimbabwe case. It would not have faced the unpalatable choice of greenlighting the forcible removal of a sitting head of state if it committed to building a more balanced regime of constitutionalism, in which incumbent subversions of democracy are addressed as vigilantly as coups by anti-incumbent forces. Through the violation of term limits, the emasculation of free and fair elections, and the persecution of their opponents, rulers are eviscerating the institutions that are essential to building a new political equilibrium in which the use of force is not needed to hold incumbents accountable.

Only by fixing the loopholes that currently plague the AU's regime of constitutionalism - rejecting de facto and de jure coups and ending the double standards that let incumbents but not their rivals off the hook for undercutting democracy - will the region finally escape politics by force.