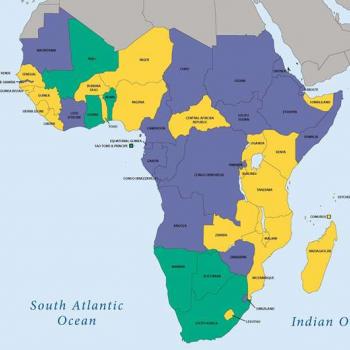 Kleptocracy—a type of corruption in which government or public officials seek personal gain at the expense of those being governed—undermines U.S. interests across sub-Saharan Africa. By promoting poor governance, kleptocracy weakens democracy and security. Popular anger and despair over corruption often fuel radical movements and insurgencies that are profoundly antagonistic to the United States and challenge the growth of democracy and the rule of law in countries that are actual or potential U.S. partners.

Kleptocracy—a type of corruption in which government or public officials seek personal gain at the expense of those being governed—undermines U.S. interests across sub-Saharan Africa. By promoting poor governance, kleptocracy weakens democracy and security. Popular anger and despair over corruption often fuel radical movements and insurgencies that are profoundly antagonistic to the United States and challenge the growth of democracy and the rule of law in countries that are actual or potential U.S. partners.

A policy of combating kleptocracy across sub-Saharan Africa would strengthen the national security of the United States, and the Donald J. Trump administration should start with Nigeria and South Africa. They are Africa’s two largest economies, and each country is ostensibly democratic, though some institutions are still fragile. The two countries’ often rival regional leadership roles are widely acknowledged elsewhere in Africa. Reflecting the importance of both countries to the United States, President Trump telephoned Nigerian President Muhammadu Buhari and South African President Jacob Zuma during his first fortnight in office, making Buhari and Zuma the only sub-Saharan African leaders with whom he has been in personal contact. Domestic anticorruption campaigns are underway in both countries, led in Nigeria by Buhari’s government and in South Africa by the political opposition and civil society, including the media and anticorruption nongovernmental organizations (NGOs). The Trump administration now has a special opportunity to help these two regional hegemons combat corruption on the African continent.

Nigeria and South Africa are both challenged by kleptocratic corruption, but there are differences in the nature and scale of the problem. Kleptocracy has historically dominated the political economy of Nigeria. In South Africa, kleptocracy is less institutionalized and less likely to distort politics.

Nigerian kleptocracy has deep, precolonial roots, and successive regimes and administrations have used it as an instrument of political control. After the 1967–70 civil war, those in government—both military and civilian—appropriated for their personal use oil revenue that under law belonged to the Nigerian people. The leaders of Nigeria prioritized the oil industry over other industries and centralized control of oil revenue, allowing senior officials to steal billions. This rooted a tradition of state theft that has lasted to this day. Nigerian kleptocrats have moved much of this stolen money out of the country through the international financial system, including South African financial institutions. Popular despair engendered by kleptocratic corruption has undermined confidence in governments and has been a driver of popular acquiescence or support for Boko Haram and other jihadist movements. Buhari is the first Nigerian candidate not from the ruling party to be elected president through credible elections, and he has strong support from the public (if not from the political classes) for his unprecedented effort to end governance by kleptocrats.

South Africa’s institutions are based on the rule of law and provide a prophylactic against the worst domestic consequences of corruption. Still, kleptocracy drags down the economy and undermines democratic legitimacy. Through its advanced communications and financial infrastructure, South Africa also serves as an enabler of illicit financial transactions from other African countries, including Nigeria. The failure of some local authorities in South Africa to deliver promised services while stealing public funds has sparked township protests and contributed to the decline in support for the governing African National Congress (ANC). Large-scale kleptocratic corruption is especially associated with the Zuma administration. It has become a partisan issue; opposition parties harp on the alleged corruption of the president, his personal associates, and the upper reaches of the ANC. Zuma has been censored by constitutionally established institutions and the courts for spending public money on his private estate, Nkandla. He also faces repeated allegations from his political opposition and the media of facilitating or ignoring the corruption of his inner circle.

At times, the kleptocratic link between Nigeria and South Africa is overt. Corrupt Nigerian politicians have found a haven in South Africa and keep substantial assets there, and many rich Nigerians have homes in Johannesburg suburbs. In turn, some South Africans profit from providing sophisticated financial services that facilitate the illicit financial flows out of Nigeria.

For example, between 2014 and 2015, in two episodes South African border officials intercepted approximately $15 million in cash from Nigeria. Buhari’s administration credibly alleges that this money was part of a scheme by the former national security advisor and others to steal billions intended for Nigeria’s fight against Boko Haram. The stolen cash was likely en route to be laundered through South Africa’s financial system.

Anticorruption initiatives are at the center of the political discourse in both countries. In Nigeria, the Buhari administration leads the effort. In South Africa, it is the political opposition, independent judiciary, free press, and civil society that keep corruption at the forefront of the national dialogue, while the Zuma administration does little more than pay lip service to anticorruption. Buhari has appealed for international assistance. So, too, have some parts of South African civil society and some members of parliament. However, as elsewhere on the African continent, the beneficiaries of corruption characterize anticorruption initiatives as neocolonial enterprises that impose Western values on Africans.

In Nigeria, the United States should partner with the Buhari administration as it seeks to recover stolen assets from abroad and, over the long term, transform the country’s political culture. In South Africa, where corruption is both less embedded and more associated with particular individuals, the United States should support the efforts of civil society groups and political parties working to expose and punish corruption through the courts.

The National Security Council should establish an interagency working group to make full use of the U.S. anticorruption policies and procedures that are already in place to pursue country-specific strategies in Nigeria and South Africa. First, the working group should ensure that an anticorruption strategy is shared by the whole government, including the Departments of State, Treasury, Justice, and Homeland Security, and the Securities and Exchange Commission. Such an approach should use anticorruption tools such as the Kleptocracy Asset Recovery Initiative and the Foreign Corrupt Practices Act (FCPA), which provide the U.S. executive and judicial branches jurisdiction over illicit money that passes through the U.S. financial system, no matter its origin, destination, or beneficiaries. The working group should collaborate closely with the Buhari administration as it seeks to repatriate stolen funds that are sheltered abroad. In South Africa, the working group should make its expertise on prosecuting money laundering and other white collar crimes in a sophisticated financial environment available to anticorruption NGOs, the courts, and members of parliament. The working group should ensure that U.S. efforts in the two countries are coordinated but reflect the important national differences; a one-size-fits-all approach should be avoided.

With guidance from the working group, the U.S. Embassies in Abuja and Pretoria should revoke the visas of corrupt Nigerians and South Africans. The purpose of this action would be to underscore that corruption has personal consequences even for those in the previously protected political classes. To that end, the Trump administration should work to speed up the slow and inefficient visa revocation procedure. U.S. embassies in both countries should publicize the policy of revoking the visas of those credibly suspected of criminality. (U.S. privacy law precludes identifying by name those individuals whose visas are revoked.) Identification of those whose visas should be canceled will be easier in Nigeria, where corruption is widespread and open. In South Africa, where corruption is smaller in scale and more sophisticated, the country’s free media and active civil society can help identify perpetrators. The Trump administration should be prepared to accept blowback from powerful political officials—in Nigeria, where a significant part of the political class could be affected, and in South Africa, where at least some of the alleged perpetrators are close to President Zuma.

The U.S. Department of State’s Bureau of African Affairs should encourage African governments, starting with Nigeria and South Africa, to enforce the pan-African multilateral anticorruption protocols to which they have already agreed. Thirty-four countries have ratified the African Union’s Convention on Preventing and Combating Corruption. The United States should assist the African Union in holding its members accountable. This should include outreach to nongovernmental organizations, such as bar associations, and facilitating exchanges with U.S. nongovernmental anticorruption organizations.

A Trump campaign against kleptocracy in Nigeria and South Africa would support democratic interests, reduce domestic acquiescence or support for insurgencies in sub-Saharan Africa, and counter international criminal networks. It would also strengthen and spread a pan-African culture of anticorruption, thereby encouraging a long-term sustainable regional commitment to good governance and the rule of law.