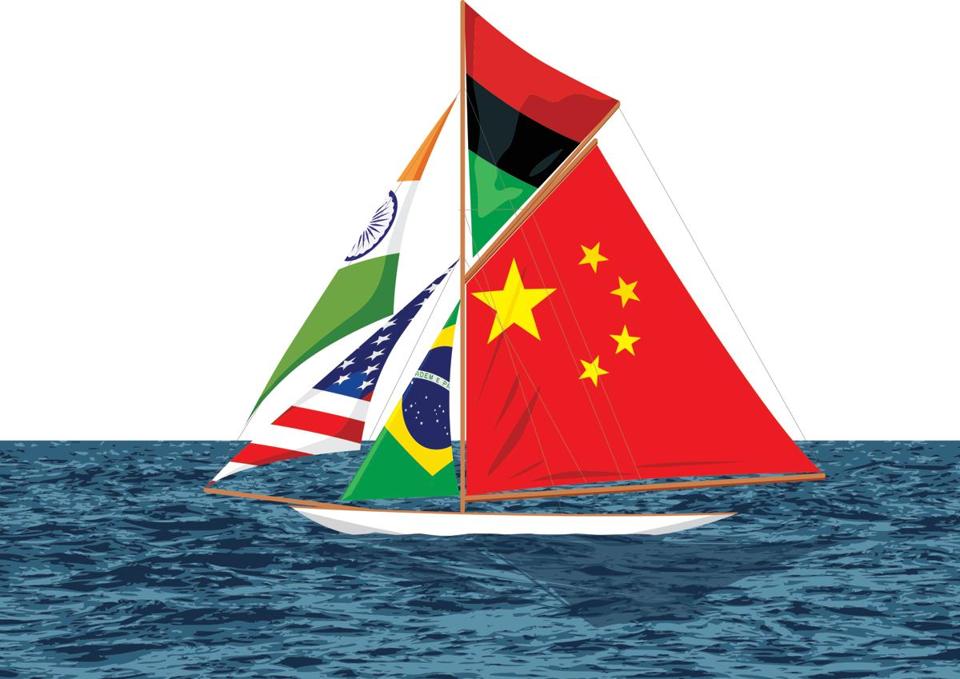 In “The Wealth of Nations,” published in 1776, Adam Smith described the early events of globalization that commenced with Christopher Columbus’s discovery of the sea route from Europe to the Americas in 1492, and Vasco da Gama’s voyage from Europe to India in 1498.

In “The Wealth of Nations,” published in 1776, Adam Smith described the early events of globalization that commenced with Christopher Columbus’s discovery of the sea route from Europe to the Americas in 1492, and Vasco da Gama’s voyage from Europe to India in 1498.

“The discovery of America, and that of a passage to the East Indies by the Cape of Good Hope, are the two greatest and most important events recorded in the history of mankind,” wrote Smith. History has vindicated Smith’s judgment. It is our generation’s fate to usher in another fundamental chapter of globalization, one which requires a rethinking of foreign policy by the United States and other world powers.

Smith noted that globalization should raise global well-being, “by uniting, in some measure, the most distant parts of the world, by enabling them to relieve one another’s wants, to increase one another’s enjoyments, and to encourage one another’s industry.” He also noted that in the first wave of globalization following the voyages of Columbus and da Gama, the native populations of the Americas and Asia suffered because Europe’s “superiority of force” enabled the Europeans to “commit with impunity every sort of injustice,” including enslavement and political domination.

Yet Smith also foresaw a future era in which the native populations “may grow stronger, or those of Europe grow weaker” to arrive at an “equality of courage and force” that could lead to a mutual “respect for the rights of one another.” Smith believed that international commerce and the “mutual communication of knowledge” (the international flow of ideas and technology) would hasten that day of equality.

Smith’s vision has arrived. Our generation is at a cusp of history, in which centuries of European (and later American) global ascendancy is now being counterbalanced by the rise of “native populations” in Asia, Africa, the Middle East, and the Americas. America’s foreign policy during the past 75 years, and arguably during the past 125 years, has been premised on a world economy led by the North Atlantic region, meaning Western Europe and the United States. That kind of North Atlantic globalization is now reaching an end. The tensions we see now around the world are symptomatic of the passing of the old order.

Consider the world at the time of Columbus and da Gama. According to global estimates made by the late economic historian Angus Maddison, the world population as of 1500 was roughly as follows. The world’s population of around 440 million people was distributed regionally as follows: Asia, 65 percent; Africa, 11 percent; Europe (East and West), 20 percent; and the Americas, 4 percent. The distribution of world output was, according to Maddison, Asia at 65 percent; Africa, 8 percent; Europe, 24 percent; and the Americas, 3 percent. The world was uniformly poor and rural, and the great agrarian empires were in East and South Asia.

While the age of discovery and commerce after Columbus gave Europe footholds in Asia and led to European conquests of the Americas, it was the Industrial Revolution in England—ushered in by the steam engine, industrial steel production, scientific farming, and the mechanization of textiles—that truly created the European world. By 1900, the world was largely in Europe’s hands, both economically and politically. Asia was still the center of the global population, but no longer of the world economy.

Note especially what had happened to China. According to the estimates, China’s share of the world economy was 25 percent in 1500 but only 11 percent in 1900. Clearly, Asia’s leading role in the world had been turned on its head by the Industrial Revolution. By 1900, the world was firmly in the hands of the North Atlantic powers. Britain, in particular, ruled the waves, so much so that the era is often called Pax Britannica, though global pax (peace) was not quite as common as in the European imagination, since Europe was fighting and conquering lands throughout Africa and Asia, and suppressing violent insurrections (known as “terrorism” to the Europeans) by local resistance to European rule.

In 1942, Time magazine editor Henry Luce proclaimed the American Century. Americans quickly bought into the idea. It fit with a longstanding US narrative: the United States as the exceptional country, the country God established to end Old World perfidy, the country with a Manifest Destiny to civilize the North American continent (through the ethnic cleansing and genocide of native populations) and later the world, the “last great hope of mankind.”

From 1945 to 1991, US foreign policy was structured to prevail in the Cold War. Though the United States dominated the world economy, the communist bloc led by the Soviet Union formed a rival ideology and a geopolitical threat. While “containment” of the Soviet Union became the prevailing dogma, a struggle emerged between US “primacists,” who saw containment as a stepping-stone to an even more grandiose concept, US leadership of the entire world system, and US “realists,” who viewed containment in more traditional balance-of-power terms. Interestingly and notably, the conceptual father of containment, George Kennan, bemoaned the primacist vision, viewing it as dangerously hubristic, an assertion of US goodness and power that was illusory and unachievable. A third group, whom I have earlier called cooperatists, believed that the Cold War itself was an unnecessary, or at least exaggerated, great-power confrontation that could be overcome through direct cooperation between the United States and the Soviet Union.

The end of World War II marked (by and large) the end of the European empires in Africa and Asia, though the process of decolonization stretched out over decades and was often violent. The United States often confused decolonization with the Cold War itself, and therefore became a voluntary heir to various anticolonial struggles, of course most notably and destructively in Vietnam, where the United States fought unsuccessfully against the national unity of Vietnam for two decades after France’s withdrawal in 1955. Similarly, the United States tried to assert its will in the postcolonial Middle East, in part to keep the Soviet Union out and in part to keep ExxonMobil and Chevron in.

With Europe’s empires gone, the newly independent nations of Africa and Asia had a new opportunity to invest in their own futures, especially in education, public health, and infrastructure. At least some of the countries made good on that opportunity. China began to stir with the People’s Republic of China established in 1949. What had been 200 years of growing European dominance began to give way to a process of “catching up,” whereby at least some of the formerly colonized countries, most successfully in Asia, began to adopt modern technologies, spread literacy and disease control, and generally achieve economic development at a pace faster than in the North Atlantic leading countries through incorporation into global production systems. The gap between the North Atlantic leaders and developing-country “followers” finally began to narrow.

The greatest success story, of course, was Asia. First, Japan quickly recovered from World War II, and began to build an industrial powerhouse. Then came the “Asian tigers”: Hong Kong, Singapore, Taiwan, and Korea. And then came China, with the market reforms commencing in 1978, when Deng Xiaoping ascended to power after Mao Zedong’s death. Asia’s example inspired market reforms in Eastern Europe and the Soviet Union from the mid-1980s, made possible by the rise to power of Mikhail Gorbachev. The initial results were more political than economic. Eastern Europe peacefully broke away from the Soviet Union in 1989, and then the Soviet Union itself dissolved into its 15 republics at the end of 1991.

In 1992, the US primacists looked out over the world and saw confirmation of their vision of a US-led (and dominated) world. The great enemy was gone. The bipolar power structure of the United States and the Soviet Union was now a unipolar world, and the “End of History” was, they imagined, at hand.

What the primacists didn’t realize is that 1992 would also mark an inflection point in the acceleration of China’s growth. In 1992, the United States produced 20 percent of world output and China a mere 5 percent. After a quarter-century of supercharged Chinese growth, in 2016 the US share had declined to 16 percent and China’s had slightly overtaken the United States at 18 percent (all these recent data according to IMF estimates). China has caught up with history.

Moreover, the surge of information technology, which will underpin the next generation of global economic growth, is spreading rapidly throughout the world; the technological revolution will create global wealth, not US wealth alone. China is now by the far the world’s largest Internet user, and broadband access is soaring in all regions of the world.

The United States will need to rethink its foreign policy in a world that has changed fundamentally, with rapid “catch-up” growth in Asia and now Africa; a worldwide IT revolution still picking up speed; and major changes in global population patterns.

Here is the key point. The dominance of the North Atlantic was a phase of world history that is now closing. It began with Columbus, took off with James Watt and his steam engine, was institutionalized in the British Empire until 1945 and then in the so-called American century, but has now run its course. The United States remains strong and rich, but no longer dominant.

We are not heading into the China Century, or the India Century, or any other, but a World Century. The rapid spread of technology and the near-universal sovereignty of nation states means that no single country or region will dominate the world in economy, technology, or population. Moreover, with world population growth slowing and the world population aging, countries will be populated by older people. The median age of the Chinese population (the age at which half are older and half younger) was 24 years in 1950 and rose to 37 years as of 2015. It is projected to rise to 50 years by 2050. Americans, too, will be no spring chickens, with a median age of 42 years as of mid-century. History has shown that a bulge of youth in the population has often been tinder for conflict; now we will have a bulge of the elderly.

If my view is broadly correct, the great foreign policy challenge of our age will be to manage cooperation among many competing and technologically advanced regions, and most urgently to face up to our common environmental and health crises. We should move past the age of empires, decolonization, and Cold Wars. The world is arriving at the “equality of courage and force” long ago foreseen by Adam Smith. We should gladly enter the Age of Sustainable Development, in which the preeminent aim of all countries, and especially the great powers, is to work together to protect the environment, end the remnants of extreme poverty, and guard against a senseless descent into violence based on antiquated ideas of the dominance of one place or people over another.