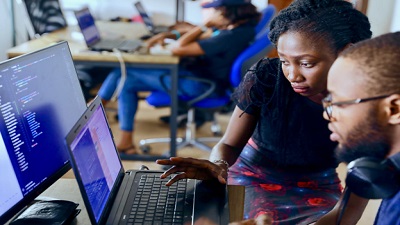 As COVID-19 and the war in Ukraine continue to hurt the African continent, many countries will require significant investment to revitalize their economies.

As COVID-19 and the war in Ukraine continue to hurt the African continent, many countries will require significant investment to revitalize their economies.

But a persistent attribute of many African markets will continue to be a barrier to private investment: a relative lack of data. This drives up diligence costs, creates difficulties in valuing assets, and promotes misperceptions about Africa—effectively stifling much-needed investment into the continent. African nations need to urgently fix this problem in order to generate a self-sustaining ecosystem that encourages investment. Luckily, the continent’s fintech revolution might offer them an opening.
Data means development

Efficient capital markets in developed economies are characterized by, among other things, active buying and selling, deep pools of liquidity, and price transparency. Such markets allow capital to be allocated “efficiently” throughout an economy, spurring growth and increasing standards of living.

Perhaps the most important attribute underpinning efficient markets and development is high-quality, timely, and trustworthy data. It could be economic data such as gross domestic product (GDP) growth, inflation, exchange rates, or a country’s account balance; capital markets data such as bank lending rates, trading volumes, and options prices; industry data such as market sizes and growth rates for various sectors; and firm data such as financial statements, company registrations, background checks, and ownership records. Access to this data—when it exists, is standardized, and is publicly available—helps investors make sound decisions.

But historically, African public- and private-sector institutions have had challenges gathering, aggregating, standardizing, and disseminating this kind of data. Most recently, nearly every African country had difficulty tracking the spread and scale of COVID-19, leading the World Health Organization in October 2021 to conclude that six out of seven cases are going undetected. Conflict-affected countries, such as South Sudan, Eritrea, and the Democratic Republic of the Congo, understandably have difficulty gathering data on GDP and census figures. And not unlike the developed world, African countries with high levels of political tension, such as Nigeria, see data either blocked from being collected or misused once in the hands of the political party in power.

The vast majority of economic activity across Africa is informal, making it difficult to understand and measure. In addition, Africa’s immature public capital markets (excluding the Johannesburg Stock Exchange) face structural problems including inadequate regulatory disclosures, low trading volumes, a lack of liquidity, and a small number of listings that restrict the production of information. Whereas public exchanges at least require minimum levels of information disclosure, private markets, where most of the investable opportunities are, have no such standard.

At the industry and sector level, market research is often not readily available. Interviewing customers or businesses in order to conduct primary market research is difficult because of the relatively poor internet penetration, myriad different languages on the continent, and the informal nature of the economy. Thus, estimating the size of a market segment, its growth rate, and any other relevant characteristics becomes a more difficult and expensive task.

Even so, there are bright spots. Nigeria recently released its draft “open banking” framework and announced its first census in seventeen years. Kenya, South Africa, Ghana, Uganda, and Malawi account for 65 percent of the total published African economic papers, a testament to the amount of available data these five countries have. Most exciting is how Africa’s large-scale usage of mobile money could dramatically alter the data landscape. More than two-thirds of the world’s one trillion dollars’ worth of mobile money transactions in 2021 occurred in Africa, and all of them are recorded. Data on everything from merchant payments, remittances, shopping habits, bill payments, and insurance trends are being captured on a plethora of platforms across the continent. This new ecosystem will likely give rise to more data-centric services, applications, and platforms similar to the fast-growing start-up Pngme in the not-too-distant future.
Investment at scale

While investors await the downstream effects of the growth in fintech and mobile money, the impact of today’s “information asymmetry” between Africa and international investors is profound. First, transaction costs are higher compared to investment opportunities in developed markets. For companies that are listed on the handful of public exchanges in Africa, the brokerage fees, exchange fees, and other costs associated with trading are higher compared to their developed market peers. Investors also often spend extra time and resources to gather proprietary information to perform their due diligence, further increasing time and expense costs.

Second, it is difficult to agree on risk, return, and price. The lack of data means that typical valuation methods, like an analysis of comparable transactions or discounted cash flows, become much harder to use. A recent survey ranked “inability to agree on value” as the top cause of deal failure across Africa. Estimating the cost of capital also becomes tricky when there is a lack of financial market data. For example, African banks struggle to establish the risk profiles of borrowers, which leads to excessively high interest rates and requirements for significant collateral.

Third, misperceptions about Africa are formed when developed-market-based investors are left to make assumptions based on the casual information to which they are exposed. Unfortunately, the international news about Africa is often negative, reinforcing pessimistic perceptions about investing in the continent. These distorted negative perceptions lead to higher perceptions of risk, higher costs of capital, and lower valuations compared to developed market investment opportunities. The continent is also often treated as a monolith in the minds of foreign investors instead of fifty-four separate and distinct countries, each with their own economic fundamentals, growth trajectories, and sector strengths. Unfortunately, these perceptions are widespread enough to eliminate investor interest in Africa altogether.

The specialist investors who operate in Africa today understand these difficulties well and have developed ways of operating amid data challenges. These include developing deep local partner networks to vet management teams and conduct diligence, using development-finance institutions (DFIs) to subsidize transaction costs, operating at lower margins to invest in proprietary research, employing creative investment instruments to manage downside risk amid data gaps, and having investment strategies that don’t rely upon bespoke, granular data. In fact, some investors embrace these attributes because of the potential to achieve outsized returns.

But the ecosystem is tiny relative to Africa’s potential. In 2021, Africa-focused private equity funds raised a record $4.4 billion, but compared to the over $700 billion raised globally, it shows just how much data challenges hinder large-scale international investment. Academic research regarding cross-border investments also confirms the data problem.

To break this loop, governments, institutions, and investors must support both the supply of and demand for data.

First, DFIs and multilateral institutions should insist on the collection and dissemination of economic data and government statistics as conditions for sovereign investment. Institutions such as the International Monetary Fund are currently helping create data standards and improve data quality through conditionality that requires country borrowers to meet specifically defined economic metrics, including commitments from countries to improve how they track data. This data then helps private-sector investors get a better understanding of the macroeconomic environment. DFIs and multilateral institutions should also help government statistics offices build capacity in collecting, analyzing, and disseminating data, and seek to release investment performance and loan default data to help investors better understand risk and return profiles.

Second, African governments should incentivize entrepreneurs to respond to investor demand for information and establish market data aggregation and reporting entities. Firms and associations like Briter Bridges, The Baobab Network, Asoko Insight, and the African Private Equity and Venture Capital Association, as well as larger platforms like PitchBook and Refinitiv that are beefing up their African databases, should be given subsidies, investment incentives, or partnership opportunities by governments. Consumer research firms and management consultancies like KASI Insight, Dahlberg, and BCG that use surveys to capture customer behavior data should be pulled in to help with government census data collection in order to gain better insights about consumer demographics and trends. Governments must also establish permissive regulatory frameworks for mobile money and its data-focused applications.

Third, governments and public and private institutions should expand their support to Africa-curious investors and develop the capital markets ecosystem. Development agencies should increase funding designed to subsidize direct transaction costs and expand their role as de-facto brokers via the use of “deal rooms.” These are a low-risk way to showcase and educate potential investors regarding the “flavor” of deals, thus increasing awareness and understanding. Governments should organize, sponsor, and fund more trade delegations to Africa that are similar to the partnership between MiDA and USAID.

In the longer term, large developed-market private equity firms, which are presently too big to exist in Africa, should seed, mentor, and support smaller investors and general partners in order to promote best practices, develop market depth, and create a pipeline for future deal flow “up the food chain.” Activities including personnel exchanges, secondments, and pro-bono work should be designed to reduce informational barriers, understand African capital markets and the local regulatory environment, and develop local partnerships. Big banks from developed nations should also mentor smaller African banks and look to create opportunities for partnerships, alliances, and deal making.

Finally, governments in Africa and the developed world should fund university-led research and graduate-level classes on African financial markets.

It doesn’t take sophisticated data to see the potential within Africa. But for that potential to be realized, governments, institutions, and investors must take a clear-eyed and long-term approach to building a mature data ecosystem. It’ll be a worthy investment.

Tom Koch is a nonresident senior fellow at the Atlantic Council’s Africa Center and director of global capital and strategy at FCA Corp, an investment firm.