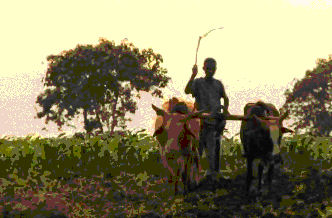 KONSO, Ethiopia — Once, the farmers walked for hours to bring their sorghum and maize here to market. These days they trod the same paths, parched grass crunching under foot, to carry their starving children to a feeding clinic.

KONSO, Ethiopia — Once, the farmers walked for hours to bring their sorghum and maize here to market. These days they trod the same paths, parched grass crunching under foot, to carry their starving children to a feeding clinic.

Like crops, the children are weighed (in a nylon harness seat attached to a scale) and measured (with a tape to record arm circumference). The most severely malnourished are kept overnight for up to a month; the rest go home with a week's supply of Plumpy'nut, a nutritional paste.

The clinic, part of a system that didn't exist five years ago, will save almost all the children from starvation. But it can't sate the hunger that has shattered their families' livelihoods - forcing them to sell skeletal cows for a few dollars, to eat this year's food reserve and next year's seed, to keep children out of school, to flee the land itself.
"We give birth to the children," says Urmale Kasaso, whose listless 4-year-old son's cheeks are puffed up like apples from malnutrition, "but we can't grow them."

Ethiopia, perennially one of the world's hungriest nations, now faces what Oxfam, one of dozens of international aid organizations responding to the crisis, calls "a toxic cocktail."
Its ingredients: drought that in some places killed the entire spring crop; global inflation that has doubled the price of food; armed rebellion in the Somali region that has disrupted food delivery; and assorted plagues, from insects to hailstones.

Unlike 1985, when images of a famine that killed 1 million Ethiopians shocked the West - "We are the world!" pop stars sang at the globally televised Live Aid concert that raised more than $250 million - this year aid workers say there probably will be no mass starvation. An expensive, elaborate social welfare apparatus, erected largely by the world's rich nations to avert another 1985, will not permit it.
Those good intentions, however, have helped produce another problem: A nation that has long seen itself as the most independent in Africa faces an ever-growing dependence on food aid from countries who now must deal with increasing food problems of their own.

At least 14 million Ethiopians - 18% of the nation - need food aid (much of it from the USA) or cash assistance, according to government figures and aid agency estimates.

Since 1985 the population has doubled to almost 80 million, and per-capita farm production has declined. Meanwhile, the global cost of raising and moving food keeps rising.

It all makes Ethiopia's hunger "a ticking time bomb," says Peter Walker, a Tufts University famine specialist.
The problem is personified by Urmale, who like most Ethiopians is known by his first, given name.
With his 4-year-old son Kusse strapped to his back, he walked three hours to the clinic here run by the government and supported by Save the Children USA, the humanitarian aid agency.

The boy had shrunk to 20 pounds after the family's crop failed and market prices outstripped the cash allowance his family gets from a government anti-famine program. Now he's gaining almost a pound a day.
But Urmale, 30, says the boy's three older siblings have a question for which he has no answer: Why did you bring us into the world if you can't feed us?
"It is sad, but I try to calm them," he explains.
"I say, 'Let me go and search for some food.' "
'What else can I do?'

The hunger has spread across two-thirds of Ethiopia, from the slums of Addis Ababa to the parched countryside around Konso to the "green hunger" region where the rains came only after the spring growing season.

The nation's emergency grain reserve is tapped out, and last month the emergency food ration was reduced by one-third. The government says 75,000 children are severely malnourished. Some people are eating cactus, roots and other famine foods.
Oxfam America staffer Rob O'Neil, who visited the Somali and Afar regions, reports that in one village people pounded their animals' food pellets into a porridge for their children.

Such coping strategies get people through to the fall harvest, but also deepen their poverty.
Dararo Darimo, a widow who walked for an hour to carry her grandson to the clinic here, knows that selling her cow only put off the day of reckoning.

"What else can I do?" she asks. "I don't want to see my grandchildren die."
Gale Kalalo, a young mother whose breast milk has dried up, says her family has only a few days' food left. After that, they'll sell their three goats, one by one. After that, they'll leave their farm and move to the city.
The hunger will be waiting.

Urban Ethiopians traditionally were untouched by the hunger that droughts brought to the nation's subsistence farmers.
Now all Ethiopians face annual food-price inflation of more than 75%; only Zimbabwe's problem is worse, according to World Bank economist William Wiseman.

Messret Tesfay, 27, lives with her daughter in a slum of Addis Ababa, the nation's capital. Her husband has left her. Her home is a one-room brick mud hut wallpapered with old newspapers. But she's always been able afford to make injera - the spongy flatbread on which (and with which) Ethiopians hand-eat their meals.
Now, however, even this national staple is denied her.

She says the cost of teff, the iron-rich cereal from which injera is made, has doubled in the past year to more than $2 per pound. That's forced her buy small pieces of cheaper, pre-made injera, or to make injera with a substitute, such as sorghum or rice.

For a moment, her stoicism cracks. "Too bitter," she says of the alternatives, making a face. "Too hard."
Even some middle-class residents of Addis Ababa, the capital, are being forced to put off weddings, carry lunches to work and eat two meals daily instead of three.

Bassie Terefe, 28, a program officer at a humanitarian aid agency, doesn't go out to dinner any more with friends. He knows that sooner or later he'd have to pick up the check, and he can't afford to.
Instead, he stays home nights, reading newspapers.

"You isolate yourself," he says. "You feel ashamed."
Hallelujah Lulie, 24, a freelance journalist, says food prices have postponed his plan to leave home and get his own place. At this rate, he says, he'll never become independent, much less get married.
"I need to learn some life skills," he says. "Now I'm dependent on my mom."

Detecting malnutrition
Famine detection, prevention and alleviation have become a major industry here.
The USA alone will give about $460 million this year just in food aid, part of a $1 billion non-military foreign assistance package. (Ethiopia is the second-largest recipient of U.S. aid in sub-Saharan Africa, behind Sudan).
With each famine, the industry grows.

In 1985, when scenes of emaciated babies and open graves galvanized world opinion, international groups such as Doctors Without Borders and CARE came to stay.

After the drought of 2003, in which more than 13 million people needed emergency food, the government and foreign donors created a system designed to make famine history.

Its components include the Productive Safety Net, a public works program that gives food or cash to more than 7 million poor Ethiopians; the Famine Early Warning System, which uses local indices - rainfall, household income, the average price of a cow - to alert government and aid agencies; a national network of government health extension workers, with two workers per locality, to detect and treat early signs of malnutrition.

In the 2003 drought, Ayelech Echetu's 18-month-old daughter, Hagira, wasted away. "We didn't understand malnutrition then," she says.

But this spring, when the drought hit, a community volunteer visited her home. She examined Ayelech's 4-year-old son, Mattios, and told her to take him to a government clinic in Tulla.
The boy has gained several pounds on Plumpy'nut, but his mother has no illusions about the future. She has sold the family's only goat. The cow is next. Then, she says, "we pray."

A bottomless dependency
Beneath the system designed to stave off famine, Ethiopian agriculture is weaker than ever.
Per-capita farm production has fallen by more than one-third since the famine of 1984-85, largely because the population has doubled - up to an average of 5.4 children per family - and the average farm plot has gotten smaller and drier.
The "green revolution" that transformed agriculture in Asia and Latin America after World War II largely bypassed Africa.
Most Ethiopians farm as their ancestors did - with oxen, wooden plows and rainfall. Farmers agree the latter has become increasingly unreliable.

He says federal officials "issue well-meaning edicts (such as), 'Increase food production 30% in your district.' " Local officials may report good results, Walker says, but "the reports we get is that production is down."

Sisay Tadesse, a spokesman for the government's Disaster Prevention and Preparedness Agency, denies that local officials tell higher-ups only what they want to hear and were slow this year to report the drought's impact: "The situation on the ground is known by everybody. We are working transparently and closely with our partners," foreign governments and aid agencies.

After some hectic scenes at underprovisioned rural feeding centers this spring, "all the stars are aligned now, and the situation is stabilized," says Glenn Anders, head of the U.S. aid mission.

But hunger remains a touchy issue in Ethiopia. The famine of 1973-74 brought down Emperor Haile Selassie, and the one of 1984-85 marked the beginning of the end for the regime that ousted him.

Moreover, the nation's reliance on others for food undercuts its sense of itself as the only African nation not colonized in the 19th century, and the only one to conclusively defeat a European power: the Italians at the Battle of Adwa in 1896.
Being synonymous with famine "hurts the image of the country," says Sisay, the government spokesman.
That may explain why Ethiopian leaders sometimes seem to be in denial.

In June, long after drought had created a food crisis, the country's health minister told reporters: "We don't need to beat the drum of hunger for Ethiopia every year."

Ethiopia can ill afford to play down its food needs; other nations' own economic worries have left them less willing or able to feed the likes of Ethiopia.

"We're past the time when food was abundant and cheap to transport," says Charles MacCormack, president of Save the Children USA, who points to spring floods in the Midwest and the price of oil as signs that U.S. largesse is finite.
This year there's been "push back" from food donor nations, says Anders, the U.S. aid mission chief: "There's this fatigue: 'Here's Ethiopia again, looking for food again.' "

So Ethiopian farmers will continue to wait for the rains - and the hunger.
Although some farmers gather in the fields at night for traditional rain-seeking rituals, Ayelech Echetu is a Christian who does her praying in church. Why, she is asked, did God not send the rains this spring?
She smiles and says what Ethiopians have been saying for a thousand years: "God is very kind. He will give us rain."