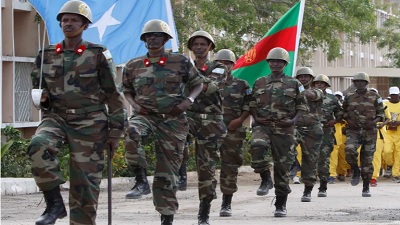 The forces took the port town of Harardhere as well as the nearby town of Galcad in central Somalia's Galmudug region, Defence Minister Abdulkadir Mohamed Nur said in a broadcast on state-owned television.

Harardhere was a major base for pirates hijacking merchant ships until 2011. It was later taken over by al Shabaab, which first rose up against the government in 2007 before pledging its allegiance to al Qaeda.

"Haradhere and Galcad districts have been taken from the hands of the al Shabaab terrorists," Nur said. "This means al Shabaab is overpowered and gone. The remaining towns will also be liberated soon."

Al Shabaab's spokespersons could not immediately be reached for a comment.

The long-running insurgency by Al Shabaab has contributed to an acute food crisis in Somalia. More than 200,000 Somalis are suffering catastrophic food shortages and many are dying of hunger, with that number set to rise to over 700,000 next year, according to the latest data from U.N. agencies and aid groups.

The government and allied clan militias have forced the militants from swathes of territory in central Somalia since launching a major offensive last August.

The successes have led some officials to claim al Shabaab is on its last legs. However, experts have cautioned that the group has been pushed out of major towns before only to regroup and reclaim areas the army does not have the capacity to hold.

"The make or break is not in the offensive phase but in everything that comes after that," said Omar Mahmood, International Crisis Group's senior analyst for East Africa. "Al Shabaab is definitely under pressure but they play a long game."

The group has responded to the military pressure with a series of high-profile attacks in the capital Mogadishu and other cities, including car bombs this month that killed at least 35 people.

Hassan Mohamed, a former military officer, said the government should replicate its cooperation with clan-based militias across the country.

"Al Shabaab would be extinct if government and clans were launching attacks in the entire country at the same time," he told Reuters.