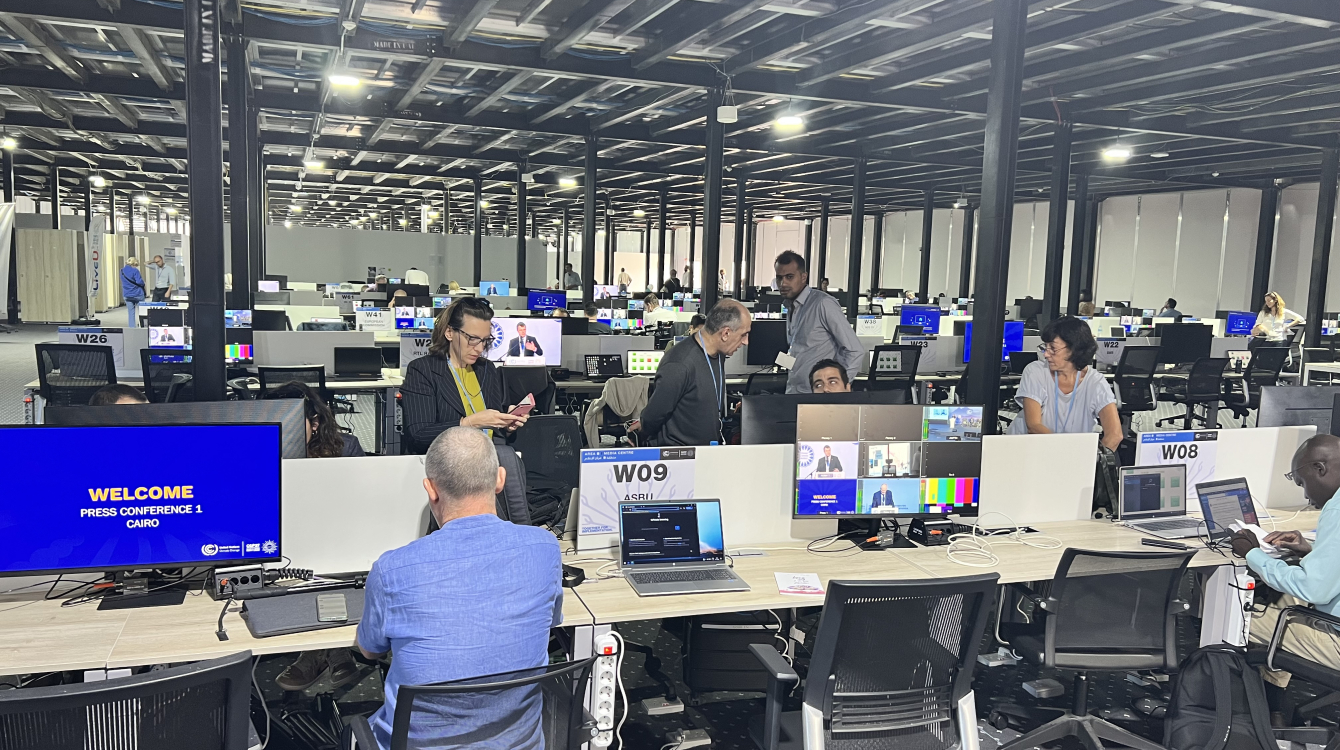 At the end of a five-minute newscast from a makeshift studio in Sharm El Sheikh, Egypt, the venue of COP27, Cotonou-based journalist Ghyslaine Florida Zossoungbo was able to provide real-time information to her compatriots back home in the Republic of Benin.

At the end of a five-minute newscast from a makeshift studio in Sharm El Sheikh, Egypt, the venue of COP27, Cotonou-based journalist Ghyslaine Florida Zossoungbo was able to provide real-time information to her compatriots back home in the Republic of Benin.

On this day, she had found a small corner in one of the pavilions at COP27, sat on a high stool behind a laptop while a camera perched on a tripod a few feet away.

At the conference, Ms. Zossoungbo and other journalists, even those from big established media institutions such as CNN or bloggers clutching an iPhone but with a large social media following, ran briskly after celebrities and world leaders or just about anyone who had anything significant to say about climate change.

And at the end of each day, they immediately churned out climate change content to audiences globally.

Yet, despite Ms. Zossoungbo’s best effort to report on the climate crisis, buoyed by new public information technology, she says climate change reporting in her country—perhaps also in rest of Africa— is fraught with challenges.

“We are the only media institution that regularly reports on the climate crisis because we are focused on SDGs,” Ms. Zossoungbo says. “Other media concentrate on politics and other issues.”

She adds: “People can see that there is something happening to the weather because of the floods and drought, but they don’t yet understand what it is in its full context. So we keep talking and talking about it.”

Mr. Ngala’s experience is that “Climate reporting often lacks context. When journalists report on flooding, for example, they don’t necessarily link it to climate change. They usually focus on the event and the impact.”

Without a perspective, climate change reporting becomes a complex concept for many, particularly the grassroots population.

Mr. Ngala provides an example of such reporting: “Not long ago, fighting broke out in communities in Cameroon’s far North Region, between Choa-Arab cattle herders and Mousgoum farmers, over dwindling water resources.

Many people died in the conflict, and a top government official decided to visit the area.

“Do you know how journalists reported the story?” Mr. Ngala asks rhetorically. “They all reported that the minister had admonished the communities and asked them to be peaceful.

“Yet, when you look at it, why were the communities fighting? It’s because the village stream was drying up, and community dwellers and cattle herders had to fight for the limited water, a consequence of changing weather patterns.

“If you ask many people in Africa why their lake is drying up or why they are experiencing frequent droughts, some will not even know, let alone advocate for solutions.

“Take the drying up of Lake Chad, which is forcing herders in northern Nigeria and Cameroon to migrate down south. The farmers in the south believe the herders are coming to take over their lands. The resulting fight has claimed many lives,” he laments.

Why then is the media not robustly telling the climate story as it should be?

Mr. Ngala blames it on lack of resources and training.

“Environment reporting is expensive; it needs a lot of traveling and risk-taking. It does not come cheap. Many media organisations in Africa find it unaffordable. For instance, they cannot afford to spend thousands of dollars to sponsor reporters to cover COP27,” says Mr. Ngala.

There are very few trained environment reporters in newsrooms, he says. As a result, climate change reporting does not yet receive the attention it deserves.

Mr. Ngala was one of several African journalists sponsored to cover COP27 by climate-focused organisations in particularly Europe and North America.

For example, the Climate Change Media Partnership (CCMP) fellowship programme, an Earth Journalism Network (EJN) project managed by Internews and the Stanley Center for Peace and Security, brought Mr. Ngala and five other African journalists to Sharm El Sheikh to cover COP27. They were among 20 journalists (out of over 500 who applied) from low and middle-income countries sponsored under the fellowship.

The fellowship package comes with training on “quality reporting on developments at COP27,” according to an EJN announcement, adding that Africa accounts for 2-3 per cent of global emissions but bears the brunt of the climate crisis. Therefore, African journalists must continue to report on the impact of the crisis and hold governments accountable.

“It was a rigorous application process,” says Evelyn Kpadeh Seagbeh of the Liberia-based Power FM and Television, also a fellow.

The perceived interest of the audience may influence content production even as the agenda-setting role of the media involves guiding audiences to focus on particular issues.

It leads to the point that African journalists have not yet effectively linked climate change issues to citizens’ socioeconomic well-being.

“That’s the point,” retorts Mr. Ngala. “Journalists report on the environment in isolation of other economic development sectors. You can see why, in many countries, the economic affairs ministries do not consider the climate crisis a part of their portfolio. It is often the preserve of underfunded environment ministries.”

“There is a lack of appreciation of the seriousness of the climate crisis,” explains Mwika Bennet Simbeye, acting Managing Editor of the Times of Zambia.

Agreeing that training and increased financing resources will boost climate reporting, Paul Omorogbe, the Chief Correspondent of the Tribune of Nigeria, is optimistic.

“I believe the situation is gradually changing. In Nigeria, climate crisis reporting is slowly but steadily gaining prominence in the media. We are getting there.”