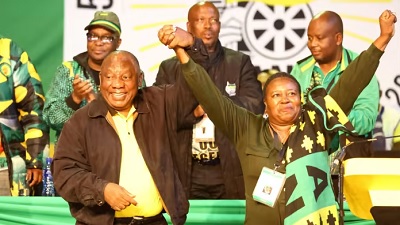 The South African president, Cyril Ramaphosa, has been re-elected as leader of the ruling African National Congress (ANC) for a second five-year term in a party leadership contest.

Cyril Ramaphosa celebrates after being re-elected as ANC leader in Johannesburg (Photo:Reuters/Siphiwe Sibeko)

The South African president, Cyril Ramaphosa, has been re-elected as leader of the ruling African National Congress (ANC) for a second five-year term in a party leadership contest.

Votes casts by delegates at the party conference gave Ramaphosa a clear victory over his rival, Zweli Mkhize, a former party treasurer and health minister.

“Ramaphosa has snatched victory from the jaws of defeat … He was on the verge of resignation just weeks ago but has emerged stronger and more powerful. It is a remarkable turnaround,” said Richard Calland, a professor at the University of Cape Town.

The two candidates for the leadership of the ANC have had to fight off allegations of corruption, reinforcing the widespread perception that the party is riddled with graft.

Mkhize was put on special leave last year over allegations that funds for fighting the Covid-19 pandemic were improperly diverted for his personal gain. He has denied wrongdoing.

Ramaphosa’s campaign was hit by the “farmgate” scandal that broke in June, involving somewhere between $580,000 and $5m of foreign currency found hidden at his private game farm.

After initially telling aides he would step down after the publication of a damning parliamentary investigative report this month, Ramaphosa launched legal action to challenge the charges, which he denies.

His re-election as party leader will reassure many moderate voters in South Africa as well as investors. The country is struggling with a flagging economy weakened by massive unemployment and months of rolling nationwide power cuts.

Under the South African political system, Ramaphosa will now lead the ANC into general elections in 2024. Though the party is predicted to lose its longstanding majority, Ramaphosa is still likely to remain as president in any coalition government.

Voting is continuing to fill the 80 posts of the ANC’s national executive committee, but a clear majority of the most senior posts in the party are now filled by Ramaphosa loyalists.

Ramaphosa has made some efforts to reform the ANC and purge corrupt networks that had become embedded over the decade before he took power. He has had haphazard success, and supporters hope he will now be better placed to act against his opponents within the party.

Thuli Madonsela, a widely respected former head of South Africa’s public standards watchdog, offered congratulations. “Blessings as you and your team tackle the Herculean task ahead,” she tweeted.

The ANC conference, held in Soweto, outside Johannesburg, showed the size of the challenges facing Ramaphosa, as well as his resilience.

“There are multiple crisis points, including a very extreme energy crisis. He needs to convert this victory into action in government. There needs to be a cabinet reshuffle in the new year and a more decisive approach to the strategic dilemmas of government,” Calland said.

The party has been in power for 28 years but has lost support in towns and cities in recent years, with its vote share of about 50% maintained only by backing from poorer, rural communities where the party’s brand of patronage-based politics works best.

Support for the former president Jacob Zuma, who was forced out amid multiple corruption scandals in 2018, remains strong in some provinces and institutions.

Ramaphosa has consistently sought to preserve the unity of the ANC but some analysts point to the party’s dominance as the principal brake on the country’s development.

“The problem is the ANC, not the country,” Asanda Ngoasheng, an independent political analyst, said this month. “South Africa has a lot of potential to reverse the downward spiral … But there is a risk of people giving up on a country that really just needs good leadership.”