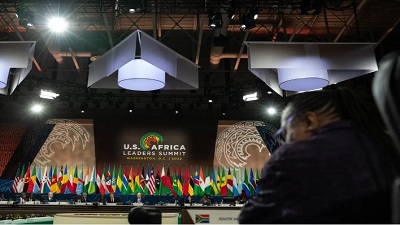 President Biden faced a challenge in winning the confidence of a continent where the circumstances of its leaders vary so dramatically.

Mr. Biden announced another $2 billion for emergency humanitarian aid on top of $11 billion in recent food security announcements. (Photo: Cheriss May for The New York Times)

President Biden faced a challenge in winning the confidence of a continent where the circumstances of its leaders vary so dramatically.

After a flurry of promises during a summit that sought to renew America’s standing in Africa, President Biden sent the continent’s leaders home on Thursday with a promise to return the visit — the first by a U.S. president to sub-Saharan Africa since 2015 — although he declined to say when the trip would happen, or to which countries.

Publicly, many of the nearly 50 leaders who made the trip to Washington praised Mr. Biden for the three-day event that included a commitment of $55 billion in American spending in Africa over three years, as well as dozens of business deals and initiatives in areas like technology, space, cybersecurity, food security and the environment.

As the summit closed on Thursday, Mr. Biden also underscored America’s more traditional priorities in Africa when he announced another $2 billion for emergency humanitarian aid on top of $11 billion in recent food security announcements.

But behind the scenes, officials from several African countries, speaking on the condition of anonymity to avoid disparaging their American hosts, were less complimentary about the summit. Some said they had heard big American promises before, notably during the inaugural 2014 U.S.-Africa summit hosted by President Barack Obama, that did not come to pass.

Others noted that some of Mr. Biden’s promises depended on approval from Congress at a time when a strained American economy and the war in Ukraine were dominant concerns.

That gap highlighted the challenge for Mr. Biden in holding such an expansive summit, and of winning the confidence of a continent with such a broad appeal when the circumstances of its leaders vary so dramatically.

African leaders have repeatedly stressed that they do not want to be forced to take sides between the United States and its strategic competitors on the continent, notably China and Russia. Mr. Biden made it clear that he heard those appeals and was at pains to avoid framing the summit as part of a strategic competition.

“We have the will to work with Africans and we need you,” Mr. Biden told the African leaders. “I hope we’re making it clear today and every day — it’s not just showing the will, but doing the work. And there’s a lot of work to be done.”

President Mohamed Bazoum of Niger said in an interview Thursday morning that the summit had succeeded in strengthening the conversation between African countries and the Biden administration. “The United States is showing increased interest for Africa, and it allows them to understand the needs of the continent and what is at stake,” he said.
Editors’ Picks
The Weeknd’s ‘Avatar’ Anthem, and 8 More New Songs
How ‘Avatar: The Way of Water’ Solved the Problem of Computer-Generated H2O
Can Humans Find Common Ground? Sure. Just Start With Sea Slugs.

Summits are rooted in symbolism, and some leaders fared better than others during their time in Washington. (Five African leaders were not invited, mostly because they had come to power through military takeovers.)

Mr. Biden met privately at the White House with the leaders of six countries facing elections next year — the Democratic Republic of Congo, Nigeria, Sierra Leone, Gabon, Liberia and Madagascar — where he urged them to hold free and fair votes. Some later posted “grip-and-grin” photos with Mr. Biden in the Oval Office, a cherished souvenir for any visitor wanting to showcase his good standing with the American president.

Other photos taken, though, proved trickier for Mr. Biden.

He took a break from the summit to watch Morocco play France in the World Cup semifinal with a handful of African leaders on Wednesday. But when a photo emerged on social media that showed Mr. Biden sitting alongside Prime Minister Abiy Ahmed of Ethiopia, watching the game, it caused a furor among Ethiopians.

Supporters took the image, which was posted on Twitter by Ethiopia’s national security adviser, as a sign that Mr. Abiy was finally back in Mr. Biden’s good books, 15 months after the United States threatened sanctions against the Ethiopian government over its conduct in the country’s ruinous civil war. But Mr. Abiy’s critics, including hundreds of Ethiopians gathered behind barricades outside the summit hall, yelling slogans against him, took it as a betrayal.

“It really broke my heart,” said Eden Kassa, a protester from the Tigray region in northern Ethiopia. “How messed up is it for Biden to sit with a person like this? Maybe this is what presidents do.”

A spokeswoman for the National Security Council said the encounter had occurred at a casual gathering where leaders were milling around the room. The United States urges further implementation of a deal to end hostilities in Ethiopia, including the withdrawal of Eritrean troops, disarmament of Tigrayan forces and access for international human rights monitors, she added.

For the Americans, the summit was not about choosing favorites or singling out abusers. All countries in good standing with the African Union, with the exception of Eritrea, were invited. Instead, the Biden administration stressed its commitment to partnership — a marked change in the tone of Washington’s relationship with the continent after President Donald J. Trump’s administration — and their belief that Africa will play a crucial role in changes that will reshape the global order.

“How we tackle these challenges, in my view, will determine the direction the entire world takes in the decades to come,” Mr. Biden told his guests on Thursday.

“African voices, African leadership, African innovation all are critical to addressing the most pressing global challenges and to realizing the vision we all share: a world that is free, a world that is open, prosperous and secure.”

The streets surrounding the convention center were sealed off, and the sirens of flashing presidential motorcades were a constant din in Washington throughout the three days of meetings. The city’s most expensive hotels bustled with African presidential delegations, as officials took advantage of the summit to hold formal and informal meetings with African neighbors.

But other Africans in Washington — many of whom fled to the United States years ago, escaping persecution or seeking prosperity — were less impressed with the tight security and glitz.

Hakeem Sankoh, who immigrated to the United States in 2014 from Sierra Leone, said that Mr. Biden’s guests were a big part of the problem in Africa, not its solution. “This is an opportunity for the United States to make a positive change,” he said. “It’s also a chance for corrupt African leaders to exploit African people and their resources.”

In a joint statement marking the close of the events, the United States and the African Union said the summit reflected an evolving relationship. “Our partnership is based on a conviction that Africa’s governments and peoples will help define the future of the international order to address our world’s most pressing challenges,” the statement read.

The African Union chairman, President Macky Sall of Senegal, enumerated Africa’s priorities including fighting terrorism, boosting democracy and negotiating “a just and fair energy transition” with the West. He also called out the United States on two issues. He pushed for the lifting of sanctions against Zimbabwe, and he criticized a proposed American law that seeks to limit illicit Russian activities in Africa, such as supporting mercenaries.

If the bill passed into law, he warned, it “could gravely harm the relationship between Africa and the United States.”

In addition to planning his own trip to Africa, Mr. Biden said he was sending his wife, Jill Biden, as well as Vice President Kamala Harris, Secretary of State Antony J. Blinken, Defense Secretary Lloyd J. Austin III, Treasury Secretary Janet L. Yellen and other senior officials to the continent.

“Promise you’ll send them back,” he said. “I need them. They all want to go, but I’m worried they won’t come home.”

If he follows through on a visit, Mr. Biden would be the sixth president since the end of World War II to travel to sub-Saharan Africa while in office. George H.W. Bush flew to Somalia in his final weeks in office to visit American troops and international relief workers, while Bill Clinton, George W. Bush and Barack Obama made more extended trips across the continent, each of them welcomed by exuberant crowds. Mr. Trump, who denigrated African countries using an epithet, never traveled there while president.

“America will not dictate Africa’s choices. Neither should anyone else,” Secretary of State Antony J. Blinken said at a Thursday news conference concluding the summit. “The right to make these choices belongs to Africans, and Africans alone. But we will work relentlessly to expand their choices.”

Analysts said that for the summit to succeed in its stated goal of showing that the United States is “all in on Africa,” it should take place every three years, as happens in China.

At a coffee shop a few blocks south of the summit hall, Florindo Chivcute, an anti-corruption campaigner from Angola, said he understood America’s rationale for holding it now. “The U.S. has fallen behind on the continent,” he said. “Russia and China are three steps ahead. It needs to catch up, fast.”

But when asked what the summit would mean to ordinary Angolans, he hesitated. “I’m not sure how it will translate for them,” he said.