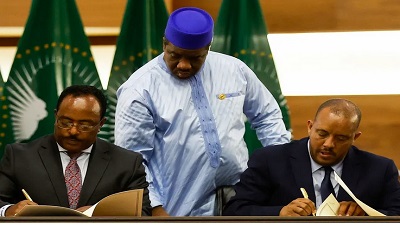 The United Nations Secretary-General Antonio Guterres said the implementation of the peace deal signed between the Ethiopian government and the Tigray People's Liberation Front (TPLF) is "extremely promising."

The United Nations Secretary-General Antonio Guterres said the implementation of the peace deal signed between the Ethiopian government and the Tigray People's Liberation Front (TPLF) is "extremely promising."

In a joint press briefing he delivered earlier this week along with the Chairperson of the African Union (AU) Commission Moussa Faki Mahamat, Guterres said "until now what was foreseen is being implemented" and the discussions at the military level are "extremely promising."

Expressing the UN's "enormous admiration" for the implementation of the peace deal to end the nearly two-year brutal conflict in northern Ethiopia, Guterres called on the international community to contribute its part to make sure that the peace agreement is a success.

The UN chief described the AU-brokered peace deal and the achievement so far as "remarkable" to end the two-year-long conflict in northern Ethiopia.

He said the United Nations will mobilize its agencies to support the parties to the conflict and the AU to reach a final settlement and reconstruct areas affected by the conflict.

The AU Commission chairperson, on his part, said a committee composed of representatives from Nigeria, South Africa, and Kenya will be deployed in Ethiopia's Tigray region to assess the implementation of the peace deal signed by the parties in Pretoria, South Africa.

"The people (members of the committee) are identified and very soon they will be on the ground in order to begin their work," said Faki, who also expressed delight over the successful implementation of the peace deal thus far.

Ethiopia, Africa's second most populous nation, has seen a devastating conflict between government-allied troops and forces loyal to the TPLF since November 2020, which left thousands dead and millions in urgent need of humanitarian assistance.

The Ethiopian government and the TPLF on November 2 signed a cessation of hostilities to end the conflict.