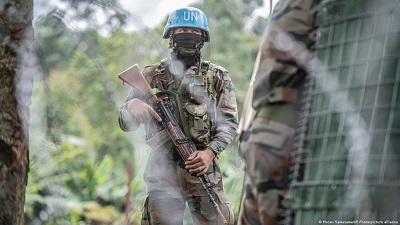 In the wake of renewed attacks by rebels in the eastern Congo, regional organizations and neighboring states are doubling down on efforts to solve the conflict. But peace remains elusive.

In the wake of renewed attacks by rebels in the eastern Congo, regional organizations and neighboring states are doubling down on efforts to solve the conflict. But peace remains elusive.

Uganda announced that it will send 1,000 troops to neighboring Congo by the end of this month. Kenyan troops, deployed as part of an East African Community (EAC) force, recently arrived in the volatile area. The regional force will "enforce peace on those who are hellbent on creating instability," Kenyan President William Ruto told a media briefing in Congo's capital Kinshasa.

Researcher Felix Ndahinda voiced doubts that military solutions would settle the region. "They know very well that the UN has tried for more than 20 years, but hasn't managed," the lecturer at Rwanda's College of Arts and Social Sciences told DW.

The UN's MONUSCO peacekeeping force in eastern Congo has a current strength of about 16,000 uniformed personnel, which, over the years, has cost the international community billions of dollars. Many in the country see the peacekeepers as ineffective.

Ndahinda also pointed out a lack of coordination between the troops deployed by neighboring countries, even before the April agreement by the seven countries that make up the EAC to set up a force to fight militia groups. The force is expected to include soldiers from Burundi, Uganda and South Sudan, as well as from Kenya. No details have been giving concerning the intended total size.
Different priorities

Another problem is the discrepancy in priorities by Congo and other EAC members. "The Congolese government wants to make it a M23 slash/Rwanda issue," the expert told DW, although there are around 120 rebel groups active in the country.

Regional powers are aware that the threat in Congo cannot be reduced to M23. The EAC's priority is to stabilize all the regions affected by violence with the help of deployed troops and then allow for a political process to take place, meaning "discussions, or even agreements between the government and the very many different armed groups, M23 included," said Ndahinda.

But the resurgence in fighting by the M23 reignited regional tensions, with Congo accusing Rwanda of backing the rebels. While Kigali denies the accusations, they are supported by the findings of UN experts and US officials.
Economic potential

President Paul Kagame of Rwanda and his Congolese counterpart, Felix Tshisekedi, are to meet in Luanda on Thursday at the invitation of Angolan President Joao Lourenco, to defuse tensions between the two countries. Kagame, whose country is a member of the EAC, recently said that he would renounce participating in the regional force "if others can solve the problem."

Congo joined the regional community as recently as last March. "Nearly all member states were convinced that they need the DRC in terms of trade and as a partner. It has a population of nearly 100 million and is a very mineral rich country," the researcher said. But "are they able to really invest first before thinking about economics and profitability?" researcher Ndahinda asked.

George Okach and Zanem Nety Zaidi contributed to this article