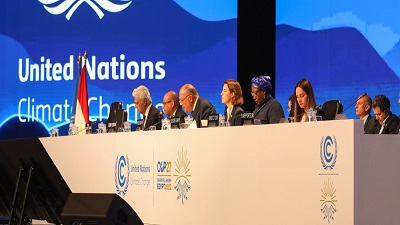 In negotiations that went down to the wire over the weekend, countries reached a historic decision to establish and operationalize a loss and damage fund, particularly for nations most vulnerable to the climate crisis.

In negotiations that went down to the wire over the weekend, countries reached a historic decision to establish and operationalize a loss and damage fund, particularly for nations most vulnerable to the climate crisis.

While many details remain to be negotiated, the fund is expected to see developing countries particularly vulnerable to the adverse effects of the climate crisis supported for losses arising from droughts, floods, rising seas and other disasters that are attributed to climate change.

While the negotiated text recognized the need for financial support from a variety of sources, no decisions have been made on who should pay into the fund, where this money will come from and which countries will benefit. The issue has been one of the most contentious on the negotiating table.

Adapting to the climate crisis — which could require everything from building sea walls to creating drought-resistant crops — could cost developing countries anywhere from US$160-US$340 billion annually by 2030. That number could swell to as much as US$565 billion by 2050 if climate change accelerates, found UN Environment Programme’s (UNEP’s) 2022 Adaptation Gap Report.

“This COP has taken an important step towards justice,” said UN Secretary-General António Guterres on Sunday.

While many praised the creation of the fund, many also worried not enough was done at COP27, held in the Egyptian resort town of Sharm El Sheikh, to reduce the greenhouse gas emissions (GHG) responsible for the climate crisis.

Here is a closer look at the other key takeaways from the conference and what they could mean for the future of climate negotiations.

Countries failed to decisively move away from fossil fuels

Countries repeated the “phase-down-of-coal” phrase featured in last year’s agreement at COP26 in Glasgow. While the final text does promote renewables, it also highlights “low emission” energy, which critics say refers to natural gas - still a source of GHG emissions.

There were continued concerns about rising emissions

The key result of the climate COPs is the final agreement, which is deliberated by delegates from almost 200 countries. This is usually the focus of intense negotiations, and this year was no exception, with talks lasting until Sunday morning. The final agreement did mention “the urgent need for deep, rapid and sustained reductions in global greenhouse gas emissions” to limit global warming to 1.5°C above pre-industrial levels, the most ambitious goal of the Paris Agreement. Yet there were concerns that no real progress was made on raising ambition or cutting fossil fuel emissions since COP26. That was considered bad news for a rapidly warming world.

The Emissions Gap Report 2022, released by UNEP just before COP27, painted a bleak picture, finding that without rapid societal transformation, there is no credible pathway to a 1.5°C future. For each fraction of a degree that temperatures rise, storms, droughts and other extreme weather events become more severe.

Climate finance was front and centre

Climate finance was, as expected, a key part of COP27. The final agreement highlights that “US$4 to $6 trillion a year needs to be invested in renewable energy until 2030 – including investments in technology and infrastructure – to allow us to reach net-zero emissions by 2050.”

States are turning more to technology

Two UN Bodies, the Technology Executive Committee and Climate Technology Centre and Network – announced plans to accelerate the deployment of “transformative” technologies to counter the climate crisis. The UN Secretary-General unveiled a US$ 3.1 billion plan to ensure everyone on the planet is protected by early warning systems in the next five years.

Methane emissions are in the crosshairs

UNEP announced the launch of a new satellite-based system designed to detect methane emissions, a potent greenhouse gas. Experts have long said that massive amounts of the gas routinely escape from oil and gas installations around the world. Colourless and odourless, methane is responsible for more than 25 per cent of the global warming the Earth is experiencing today. UNEP will use the satellite detection to notify governments and companies of methane leaks, helping them to take action.

An array of states, regional governments and development agencies pledged US$230 million to the Adaptation Fund to help vulnerable communities around the world adapt to climate change. Governments also made incremental progress on the Global Goal on Adaptation, a pivotal part of the Paris Agreement designed to help countries contend with the fallout from the climate crisis. Those discussions are expected to conclude at COP28 next year in the United Arab Emirates.

The Global Peatlands Assessment was launched by UNEP in Sharm el-Sheikh. The first comprehensive global assessment of peatlands in almost 15 years, the report highlights the importance of peatlands to both biodiversity and sequestering carbon. It found that the world loses 500,000 hectares of peatlands a year, while already drained and degraded peatlands contribute around 4 per cent of annual global human-induced greenhouse gas emissions.

Young people were in the spotlight

A pavilion at COP27 was devoted to children and youth for the first time, underlining that younger generations will suffer the most from the climate crisis. The conference also featured the first youth-led climate forum, which included several senior policymakers. In the closing agreement, delegates urged countries to appoint young people to the negotiating teams for future climate talks.

Leaders were pressed to do more

Hanging over COP27 was the spectre that despite decades of meetings and landmark accords, like the Paris Agreement, the world was still not doing enough to slow the climate crisis. UNEP’s Emissions Gap Report 2022 found that policies currently in place point to a 2.8°C temperature rise by the end of the century, a number that could lead to catastrophic consequences for the planet. Full implementation of the latest pledges to reduce greenhouse gases could slow this increase to 1.8-2.1°C, but the report does not find a credible pathway for the 1.5°C target. For many in Egypt, that data underscored the need to ramp up climate action.

“As the world looks to step up efforts to cut greenhouse gas emissions – efforts that are still not anywhere strong enough – it must also dramatically up its game to adapt to climate change,” said Inger Andersen, Executive Director of UNEP.