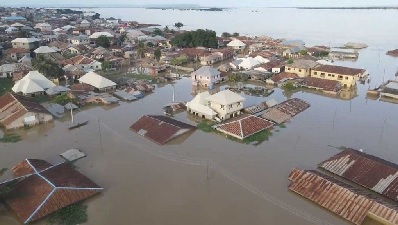 Nigeria’s southern Bayelsa state is officially nicknamed the ‘glory of all lands.’ But much of it is now a river that has driven entire communities away from their homes.

Nigeria’s southern Bayelsa state is officially nicknamed the ‘glory of all lands.’ But much of it is now a river that has driven entire communities away from their homes.

Desperate to survive, many locals fleeing raging floods which have wrecked their homes and livelihoods are also forced to depend on floodwater for sustenance.

For displaced inhabitants of northern Bayelsa’s Odi town, who have found new homes in roadside shacks and tent shelters with no access to running water, stagnant floodwaters are the only available alternatives for drinking, cooking and bathing.

As she rinses her uncooked fish in dirty floodwater next to her neighbor doing his laundry, local trader Chigozie Uzo shares her fears of catching a waterborne disease.

“I’ve heard of cholera,” she told CNN, “but I don’t have a choice than to use this water.”

Meters away from Uzo, a young girl aged no more than five years old squats to urinate in the same floodwater she had rinsed her pot and plates in.

Humanitarian agencies fear the floods will contribute to a health disaster and Nigeria has already seen a rise in cholera infections as floods ravage many parts of the country.

According to UNICEF, “more than 2.5 million people in Nigeria are in need of humanitarian assistance – 60 per cent of which are children – and are at increased risk of waterborne diseases, drowning and malnutrition due to the most severe flooding in the past decade.”

A rise in cholera infections could be devastating for the country as the World Health Organization warns of a “strained global supply of cholera vaccines.”

Bayelsa and 30 other Nigerian states have reported thousands of suspected cholera cases, the country’s Centre for Disease Control and Prevention (NCDC) said in a recent report.

Bayelsa is among 33 of 36 Nigerian states grappling with the devastation of the country’s worst flooding in a decade. More than 600 lives have been lost in floods across the West African country, its government says, and almost 1.5 million people have been displaced, according to the country’s humanitarian ministry.

Nearly half of the population has been affected in Kogi state, where Nigeria's two largest rivers — the Niger and the Benue — meet, as well as nearly 40% in neighboring Anambra state. In northern Nigeria, a flood around the Yobe River affected more than a quarter of the population in Yobe state.

Aniso Handy, 56, has remained in his house in Odi, which has been overrun by water.

“I still live here,” he told CNN as he paddled his canoe into his flooded living room before making his way to a dry room upstairs.

“My family doesn’t stay here because of the flood and for their safety … but I know how to swim,” he said.

For some in the community, such as 27-year-old Igbomiye Zibokere, this is not the first time they have experienced the devastating effects of flooding.

During the last major flooding in 2012, her sick mother drowned in her room when water engulfed their home, she told CNN.

“My mum was ill when the floods came in 2012. The water level was high and my sister and I couldn’t carry her. All we could do was cry as she drowned in her room,” Zibokere said.

Zibokere, who is a petty trader, said she returned from the bush near her home in early October to find it taken over by water. The water level rose to her neck and they were forced to leave the house.

She and her young children are now homeless and living rough in a makeshift tent by the roadside.

“We are in a canopy. If it rains, the canopy would be blown away by the wind and we’ll be beaten by the rain. I’m suffering now. No food to eat or water to drink,” the mother-of-five said.
Displacing the living and the dead

In Bayelsa’s capital Yenagoa, located 28 kilometers (17 miles) from Odi, floods have displaced not just the living but also the dead.

In Yenagoa’s Azikoro village, residents said bodies have been seen floating in floodwaters around a local cemetery.

Adjusting to life wading through the stench of the stagnant water isn’t the only worry for residents of Azikoro as the cost-of-living skyrockets in Bayelsa due to the floods.

With major highways underwater, Bayelsa has been cut off from the rest of the country. Boats have become the only way to get around much of its environment.

To get to Bayelsa, travelers pay around 2,000 Naira (less than $5) to get on a packed tipper truck to cross flooded roads.

Those unable to afford the fee can be seen wading through the water carrying what little possessions they can.

Nigeria’s current flooding has been attributed to above-average rainfall and an overflowing dam in neighboring Cameroon. But the situation has also been exacerbated by poor drainage infrastructure, environmentalists have said.

With a warmer climate causing more intense rainfall, authorities also blame climate change for the floods. In the meantime, the country aims to tackle one of the major causes of its flood problems by holding bilateral talks with Cameroon on the periodic opening of its dam, Nigeria’s humanitarian ministry said.

“We must initiate a bilateral discussion with authorities in Cameroon next month (November 2022) on the periodic opening of the Lagdo dam,” a statement by the ministry said last week.

Catastrophic flooding along Nigeria’s major rivers has displaced more than 1.5 million people and has killed more than 600, according to the Nigerian government and humanitarian ministry. The flooding has been attributed to above-average rainfall and the overflowing of Lagdo dam in Cameroon.

But weeks since the flooding began, Nigeria’s government has yet to declare the flood a national emergency.

Minister of Water Resources, Suleiman Adamu, told local media last week: “It’s certainly an emergency situation but it all depends on what you mean by the declaring state of emergency. We have not reached a situation in my view where the relevant emergency management authorities have not been able to deal with this situation.”

“Nigerians are used to managing. If not, we would have all died,” he said. “Nigerians care for themselves, we’re more like infants that have no father or mother.”

Authorities in Bayelsa say they are racing to provide relief items for the thousands displaced.

According to the local government, around 20,000 people now live in displacement camps, where they are provided “two meals daily” along with “medical services, potable water and other emergency aids.”

But for Zibokere, government efforts are rarely felt in her community.

“When relief items are sent to the community by the government, individuals handling them distribute most of it to their relatives. The rest of us are left in hunger,” she said.

Bayelsa government spokesperson Daniel Alabrah said the government was aware of these complaints.

“We hear some of those complaints but we cannot verify them because while some claim not to have gotten the relief materials, others say they got it,” Alabrah told CNN. “These reports help us to monitor the process to see that relief materials get to the persons they are intended for,” he added.

With the rains still coming and more expected through November, more intense flooding is imminent, the Nigerian government warns.