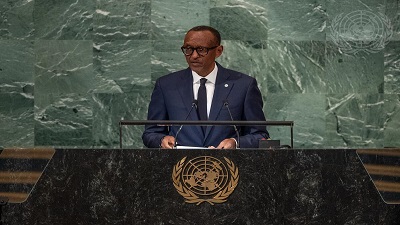 President of Rwanda, stressed that the world is in a state of turbulence, with intersecting crises growing in scale and severity.

President of Rwanda, stressed that the world is in a state of turbulence, with intersecting crises growing in scale and severity.

Challenges including climate change, rising food prices, conflicts and uncontrolled migration, require multilateral cooperation. Yet, he continued, the perception that the international system is no longer up to the task has only deepened, particularly when the interests of powerful States are at stake.

Turning to the eastern region of the Democratic Republic of the Congo, he noted that recent setbacks have highlighted that the security situation in the country is “fundamentally no different than it was 20 years ago when the largest and the most expensive United Nations peacekeeping mission was first deployed”. This has exposed neighbouring States, notably Rwanda, to cross‑border attacks that are preventable, he added. He stressed the need to address the root causes of destabilization in the Democratic Republic of the Congo. “The blame game does not solve the problems,” he stressed. He went on to say that finding a solution to this challenge would ultimately be much less costly in terms of both money and human lives.

As an example of international cooperation successfully addressing the issues that matter to all, he pointed out that the Global Fund to Fight AIDS, Tuberculosis and Malaria has helped countless lives in Africa and beyond. He expressed hope that all countries will sustain their commitments at the seventh Replenishment Pledging Session happening later today. Outlining his country’s efforts in working with partners to bring vaccine manufacturing to the African continent, notably through collaboration with BioNTech and with strong support from the European Union, he stressed that this is critical to increase resilience against future pandemics. He went on to underscore the importance of digital technologies, stressing that “the future is digital”. To ensure that the international community equally benefits from the digital transformation, it must continue investing equitably in emerging technologies such as artificial intelligence.

On peacebuilding and counter-terrorism, he mentioned that regional and bilateral initiatives can complement the work of the Organization. Citing the initiative in northern Mozambique which was undertaken by Rwanda and the Southern African Development Community (SADC) to contain violent extremism, he stressed that the same approach would “make a difference” if tried properly in the Democratic Republic of the Congo. However, sustaining such efforts require consistent financial support from the international community. “We cannot anticipate or prevent every crisis, but we can be better prepared to react quickly and effectively when needed — especially when we work together,” he said.