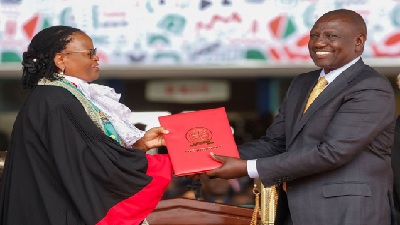 Kenya swore in its new president, William Ruto, on Tuesday, following a tightly contested election. Numerous African leaders attended the ceremony for Ruto but his chief election rival, Raila Odinga, stayed away. As Kenya’s fifth president, Ruto faces a struggling economy, massive debt, and a record drought that has devastated northern parts of the country.

Kenya swore in its new president, William Ruto, on Tuesday, following a tightly contested election. Numerous African leaders attended the ceremony for Ruto but his chief election rival, Raila Odinga, stayed away. As Kenya’s fifth president, Ruto faces a struggling economy, massive debt, and a record drought that has devastated northern parts of the country.

In an elaborate ceremony, William Ruto took the oath of office to be Kenya’s fifth president at Moi International Sports Center in Nairobi.

Tens of thousands of Kenyans, a host of African leaders, representatives from foreign governments and ambassadors witnessed the inauguration.

Ruto takes the reins of power from former boss Uhuru Kenyatta, for whom he served as deputy president for the past 10 years.

The incoming president likened his win to that of the country gaining independence from colonizers.

“Our special gratitude also goes to millions of Kenyans in the hustler movement for tirelessly mobilizing for the campaign and executing a historic revolutionary feat perhaps as great as the daring exploits of our legendary freedom fighters,” he said.

After years of neglect, the incoming government campaigned on what it called a “hustler” platform to empower the poor.

Ruto said in his speech that he will work with Kenyans irrespective of whom they voted for.

Ruto said as one of his first initiatives, he will lower the cost of food and announced the reduction of fertilizers from $54 to about $30 per bag.

Samuel Nyandemo teaches economics at the University of Nairobi. He says the nation's economic state will make it difficult for the new government to deliver on its promises to the citizens.

“He is inheriting an economy which is highly affected by foreign debt, implying that it will be very difficult for him to navigate in terms of trying to sort out the promises he gave in the first 100 days. So, he is coming in an economic mess. They did, the two of them, and coming out of that economic mess will require a miracle,” he said.

By “they,” Nyandemo means Ruto and his predecessor Kenyatta. Critics of the Kenyatta government accused it of overborrowing and corruption.

As deputy president, Ruto fell out with Kenyatta, who supported his rival in last month’s election, Raila Odinga. Odinga lost with 6.9 million votes to Ruto’s 7.1 million in an election marked by low turnout, a split election commission, and allegations of fraud by Odinga.

In the past few weeks, some members of parliament allied to the Odinga coalition party have crossed into the government, a move that has many worried that the country may not have a strong opposition to check on Ruto's administration.

Political commentator Herman Manyora says the country could be headed for trouble if the opposition aligns too closely with the new president.

“What might be the danger that people are seeing given his current approach of poaching people? We can quickly turn Kenya into one-party state not by law but by practice because he is out to get all these people on his side and Raila is the only opposition voice so if Raila chooses to keep quiet, he has had enough … then we shall be going to one party democracy,” he said.

Odinga, who challenged his loss unsuccessfully at Kenya’s Supreme Court, did not attend Tuesday’s swearing-in ceremony. In a previous statement, he said he would continue to work to transform the country into a prosperous democracy where each Kenyan fully belongs.