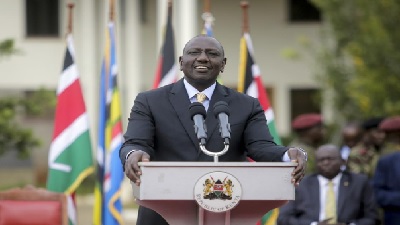 President-elect William Ruto said he will work to deliver for the Kenyan population, speaking after the country’s Supreme Court upheld his recent election win.

President-elect William Ruto said he will work to deliver for the Kenyan population, speaking after the country’s Supreme Court upheld his recent election win.

The court unanimously dismissed claims by petitioners, including runner-up and former Prime Minister Raila Odinga, that the vote was rigged.

The seven-judge court ruled that results of the August 9 presidential election were valid under the constitution and electoral law.

The judges also said they found no significant irregularities or illegalities.

Chief Justice Martha Koome read the ruling on behalf of the other six judges. She dismissed eight petitions challenging the outcome, including the one from former Prime Minister Raila Odinga.

“The presidential election petition E005 of 2022 as consolidated with the presidential petition numbers E001, 2, 3, 4, 7 and 8 of 2022 are hereby dismissed. As a consequence, we declare the election of the first respondent as president-elect to be valid under Article 143 of the constitution,” said Koome.

The court found that the electoral commission deployed technology that correctly identified voters, transmitted results and was not disrupted.

The court also said the polling station results were not tampered with and found that Ruto attained more than 50 percent of the vote, the standard required for the leading candidate to avoid a run-off.

Koome said there were some problems with the election but none that would call for the election to be invalidated.

“Although the petitioners have provided numerous environments pointing to possible irregularities and illegalities marked by failure of technology, arrange voter suppression, ... ill preparation by the IEBC and its chairperson, commission indiscretions, transposition anomalies, agent absence and many others, we are of the view that the pointed irregularities and illegalities were not of such magnitude as to affect the final result of the presidential election,” said the chief justice.

The IEBC is the Independent Electoral and Boundaries Commission.

Odinga said in a statement that he would respect the court’s ruling. He said, quoting here, “We have always stood for the rule of law and the constitution. In this regard, we respect the opinion of the court although we vehemently disagree with their decision today.”

His running mate, Martha Karua, said on Twitter that the court had spoken but that she disagreed with the findings.

One of the lawyers representing Odinga, James Orengo, also objected to the ruling.

“The rule of law should prevail; the court normally has the last word in making a statement as to what’s the law of the land, but as citizens who are sovereign, we are entitled to disagree and disagree very vehemently,” he said.

Ruto will be sworn in next week and become the fifth president of the republic of Kenya, succeeding Uhuru Kenyatta.