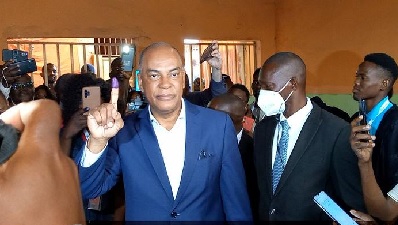 Angola holds presidential and parliamentary elections Wednesday in what is expected to be the biggest challenge to the country’s longstanding one-party rule.

Angola holds presidential and parliamentary elections Wednesday in what is expected to be the biggest challenge to the country’s longstanding one-party rule.

The ruling MPLA party, in power for nearly half a century, has been losing young supporters to the leading opposition party, UNITA.

The presidential candidates have focused mainly on economic issues, but observers are expressing concern about whether the election will be fair.

The incumbent president, Joao Lorenco of the People’s Movement for the Liberation of Angola, MPLA, is facing a tough challenge from the opposition candidate Adalberto Costa Junior of the National Union for the Total Independence of Angola, known as UNITA.

The two main political parties have promised to fight corruption, create jobs and improve the living standard of the people. Currently, half of Angola’s population lives on less than $2 per day.

Borges Nhamirre, a researcher for Institute for Security Studies, said the election campaign has been peaceful, with candidates focusing on solving the people’s and country’s problems.

“The electoral campaign was good, not much violence as in the past,” he said. “And also, the candidates discussed ideas about what they have to do for Angola; that is good as well. The performance of the electoral body was not that good because they failed to organize a transparent and fair election. The National Electoral Commission did not submit the voter roll to be audited, so they are going to vote, but the number of voters is not audited as mandatory by the law.”

Critics accuse the electoral commission of failing to build trust with the political class and the public ahead of the election.

Officially, there are at least 14 million people eligible to vote but some suspect the actual number to be less because the commission failed to clean the voter rolls of possible double registrations and the deceased.

UNITA fears the unverified voter register could be used to rig the vote in favor of the ruling party.

Opposition groups have also criticized the commission's move to announce the results at the national election center in Luanda's capital instead of at polling stations.

The head of Angola Institute of Electoral System and Democracy, Luis Jimbo, said the electoral agency must act properly on election day.

“Right now, it’s not about transparency. There have been a lot of transparent things that were supposed to be done from the beginning,” he said. “But we are demanding they must follow the law according to what the law says, to publish the results at the polling station, and the result at the national center must reflect those results. So, they are aware of this and there is pressure from all of society."

Experts predict a tight presidential election. According to recent public opinion surveys, UNITA’s popularity among young voters has grown, something that worries the MPLA.

Nhamirre said the opposition can win the election but the ruling party may refuse to hand over power.

“In Angola, it’s very difficult to distinguish who is MPLA, the ruling party, and who is the state, so I foresee some groups within MPLA not accepting the result,” he said. “So, we might have a situation that mediation will be necessary to prevent conflict in Angola.”

Nhamirre says conflict can be avoided if the police remain peaceful and refrain from violence in the event of any post-election protests.

The MPLA has been in power since Angola won independence from Portugal in 1975.