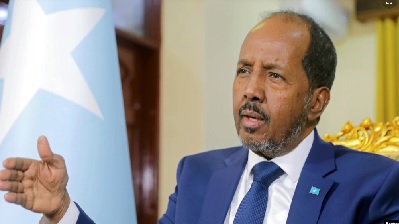 Somali Federal government leaders have called upon the political leaders in Somaliland to maintain stability and resolve differences through dialogue. Recent protests and clashes in the breakaway region killed five people.

Somali Federal government leaders have called upon the political leaders in Somaliland to maintain stability and resolve differences through dialogue. Recent protests and clashes in the breakaway region killed five people.

In a short video released by the president’s office Friday night, Hassan Sheikh Mohamud called on the Somaliland ruling party and opposition leaders to resolve their political differences through dialogue to avoid instability.

Mohamud urged the leaders to avoid further violence and resolve their differences themselves using processes they have in place, or the region will require foreign intervention to stem the election dispute.

He says there must be peace, administration, law and order, and that is something very valuable - a value that becomes even more important when it’s lacking. He says he is calling on the political leaders on both sides, traditional leaders, religious leaders, civil society leaders and different public groups to resolve the outstanding issues through negotiations.

He called on the upper house of Somaliland, known as Guurti, to stand up in resolving the election dispute that resulted in a massive protest against the current president Muse Bihi Abdi.

Thursday’s protests and clashes between opposition supporters and the security forces claimed the lives of at least five people and wounded 100 others, including numerous security officials.

Although the situation appears to have calmed down a bit since late Thursday, the opposition says the protests will continue.

The constitutional mandate of the region’s upper house already has expired, and the president’s term in office is about to end in November, but the prospect is slim of holding the election.

Civil society activists in Somaliland who spoke with VOA Saturday called on the government to respect the rights of citizens in accordance with national and international law — and to resolve the dispute through political means.

Guleid Ahmed Jama, is a Hargeisa-based law practitioner and civil society activist. He told VOA that lawmakers from the House of Representatives are returning from recess to seek a political solution to the election dispute.

Jama said he is calling upon the disputed sides to come together via a political dialogue and enter negotiations that Somaliland is known for in order to create political tolerance. He says he is seeking the protection of rights in accordance with the Somaliland constitution and international law, that no harm comes to civilians and that peace and stability is maintained.

Somaliland’s international partners include the U.S. and Denmark, who are also calling for dialogue and a peaceful solution in the breakaway region.

Somaliland is a self-ruled region of northern Somalia that declared independence in 1991 but has not received recognition from the international community.