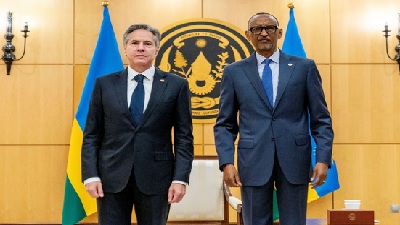 U.S. Secretary of State Antony Blinken said on Thursday he discussed with Rwandan President Paul Kagame "credible reports" that Rwanda continued to support the M23 rebel group in the Democratic Republic of Congo.

U.S. Secretary of State Antony Blinken said on Thursday he discussed with Rwandan President Paul Kagame "credible reports" that Rwanda continued to support the M23 rebel group in the Democratic Republic of Congo.

Blinken said Kagame and Congolese President Felix Tshisekedi had agreed to engage in direct talks to address the fighting in eastern Congo.

The U.S. senior diplomat is on a visit to Kigali less than a week after it emerged United Nations experts had found "solid evidence" Rwanda has been interfering militarily in eastern Democratic Republic of Congo. Rwanda's government has disputed the U.N. findings.

The conflict was a focus of his meeting with Tshisekedi on Tuesday.

"My message to both President Tshisekedi and President Kagame this week has been the same: any support or cooperation with any armed group in eastern DRC endangers local communities and regional stability, and every country in the region must respect the territorial integrity of the others," Blinken said during a joint media event with his Rwandan counterpart.

"Both presidents have agreed to engage in direct talks with each other."

Kagame and Tshisekedi met at a summit in Angola to de-escalate tensions from the rebel insurgency.

Rwanda has previously denied accusations by Congo that it supports the M23 and that it has sent troops into the country. The M23 has denied it receives Rwandan support.

A target of the M23 and Rwandan operations in Congo has been the Democratic Forces for the Liberation of Rwanda (FDLR), a Hutu militia which Rwanda accuses Congo of using as a proxy. Congo's government has denied this.

"We agreed on the need to eradicate all irregular armed groups operating in the eastern DRC including the FDLR and its factions," Biruta said.

Since May, M23 has waged its most sustained offensive in years, killing dozens and displacing tens of thousands of people. By July, it controlled a territory in Congo almost three times as large as it did in March, U.N. experts said.