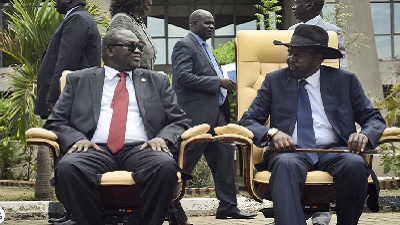 South Sudan leaders said Thursday the country's transitional leadership will stay in power for another 24 months to complete the political, security and electoral reforms needed to move the country forward.

South Sudan leaders said Thursday the country's transitional leadership will stay in power for another 24 months to complete the political, security and electoral reforms needed to move the country forward.

Minister of cabinet affairs Martin Elia Lomuro, who made the announcement, said the decision to extend the mandate will help address the challenges that impede implementation of the 2018 peace deal that ended South Sudan's civil war.

Thursday's move is likely to anger the international community, which has not been happy with the leadership's inability to end the transitional period, which began in February 2020.

Experts say the leadership has been slow to fully implement the proposed reforms.

The South Sudan government, led by President Salva Kiir and his deputy Riek Machar, also postponed elections to 2023 and blamed the postponement for the lack of a permanent constitution.

Civil society groups in South Sudan agree the situation on the ground, still volatile in parts of the country, does not permit a free, fair and peaceful election.

Armed confrontations between the government forces, known as the South Sudan People's Defense Force, and the rebels, the Sudan People's Liberation Movement in Opposition, have held up efforts to unify the security forces into one national army.

Security experts say that unifying the divided security agencies would play a significant role in making the country a democracy and a stable state.

In July, the United States pulled out of the country's peace process, saying the sides had failed to make the necessary reforms to end the political and security crisis.