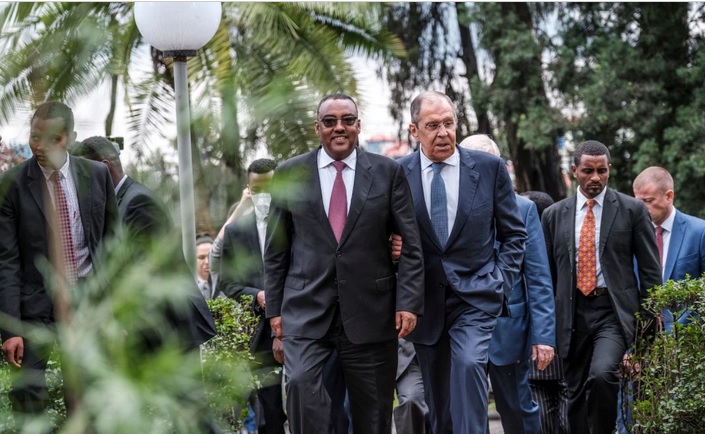 The Biden administration is dispatching two of its top officials to Africa in the coming weeks in a bid to revive U.S. engagement on the continent and compete with its geopolitical rivals, Russia and China, for influence.

The Biden administration is dispatching two of its top officials to Africa in the coming weeks in a bid to revive U.S. engagement on the continent and compete with its geopolitical rivals, Russia and China, for influence.

Suits on the ground. U.S. Secretary of State Antony Blinken is expected to travel to the continent in early August, including likely stops in the Democratic Republic of the Congo and South Africa, as several current and former U.S. officials confirmed to SitRep. Meanwhile, U.S. President Joe Biden’s ambassador to the United Nations, Linda Thomas-Greenfield, is heading to Ghana and Uganda next week, following a trip by U.S. Agency for International Development chief Samantha Power to Somalia and Kenya last week.

Against the backdrop of it all is geopolitical competition, punctuated by how Washington and Moscow are vying for support from African countries over the war in Ukraine. African countries are reeling from the economic shockwaves of the war, including food supply crunches after Russia’s invasion of Ukraine derailed important exports of food and other agricultural staples from both countries.

Who’s your true friend? Russian Foreign Minister Sergey Lavrov visited Uganda, the Republic of Congo, Ethiopia, and Egypt this week on a charm offensive to showcase that Russia isn’t as internationally isolated as the West hoped. He also painted Russia as a true friend of African countries that won’t give the continent short shrift—backing proposals to offer African powers greater influence at the United Nations and a permanent seat on the U.N. Security Council—and blamed the West for shocks in the food markets.

“I am sure the overwhelming majority of world countries do not want to live as if the colonial times [have] come back,” Lavrov said during his stop in Ethiopia.

Your friendly neighborhood mercenary. Lavrov’s trip comes as Russia is expanding its military and not-quite-military footprint in Africa, maintaining a presence of Kremlin-linked mercenaries from the Wagner Group in politically unstable African countries to keep its influence on the continent. Jack and our colleague Amy Mackinnon reported this week that after Wagner solidified its presence in Mali, it may be headed to Burkina Faso next, at least according to U.S. intelligence sources.

All steak, no sizzle? Still, it’s easy for Lavrov to talk a big game, but his country’s economy is in tatters, the war in Ukraine has turned into a quagmire, and most of the world’s major economies are on board with devastating international sanctions. Outside of some fancy diplomatic wrangling and mercenaries who have a penchant for committing atrocities, Russia’s olive branch to African countries comes with a lot of thorns.

“This is a dangerous game for these African leaders,” Joseph Siegle of the Africa Center for Strategic Studies wrote in the Conversation. “Russia has an economy the size of Spain’s, does not provide significant investment or trade to the continent (other than grains and arms), and is increasingly disconnected from the international financial system.”A tough road ahead. Blinken, meanwhile, has his work cut out for him duriTg his second visit to the continent as secretary of state. South Africa has faced pressure to take a tougher line on Russia over its invasion of Ukraine, and U.S.-led efforts to rally countries across the continent to isolate Russia diplomatically and economically have so far fallen short.

During his upcoming visit to Congo, which the Africa Report first reported, Blinken is expected to try to mediate tensions between Congo and Rwanda over Rwanda’s alleged support of the M23 rebel group engaged in ongoing clashes with the Congolese military.

You’ve been warned. A top U.S. lawmaker and an important ally of Biden in Congress has also put the administration on notice. Sen. Bob Menendez, the chair of the Senate Foreign Relations Committee, sent a letter to Blinken saying he would place a hold on U.S. security assistance to Rwanda, beginning with several million dollars of support for Rwandan peacekeepers. The letter, a copy of which was obtained by Foreign Policy, was sent to Blinken on July 20.

Menendez, who has repeatedly demonstrated that he has no hesitation in calling out a president from his own party on upholding human rights globally, urged Blinken to undertake a “comprehensive review” of U.S. policy toward Rwanda in light of what he called the Rwandan government’s “continuing disregard for democratic and human rights.”