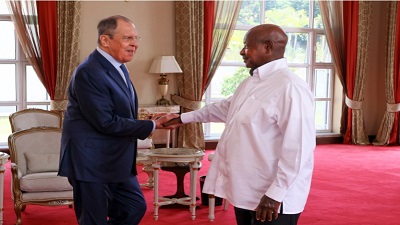 “We confirmed our positions when it comes to the reforming of the U.N. Security Council,” Lavrov said. “The main problem here is the underrepresentation in the Security Council of developing states and the only solution to this problem is bigger representation of Asian, African and Latin American countries.”

Uganda is the third stop on Lavrov’s tour of Africa as Russia tries to break diplomatic isolation over its war in Ukraine. Lavrov will end his trip with a visit to Ethiopia, the headquarters of the 54-nation African Union.

Uganda is one of 25 African nations that abstained or didn’t vote in the U.N. General Assembly resolution condemning Russia’s invasion of Ukraine earlier this year. Many nations on the continent of 1.3 billion people have long-standing ties with Moscow, dating back to the Cold War when the Soviet Union supported their anti-colonial struggles.