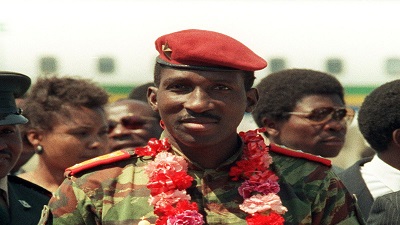 Burkina Faso's former President Blaise Compaoré has received a life sentence in absentia for his role in the assassination of his charismatic predecessor, Thomas Sankara.

Burkina Faso's former President Blaise Compaoré has received a life sentence in absentia for his role in the assassination of his charismatic predecessor, Thomas Sankara.

Sankara, 37, was gunned down along with 12 others during the 1987 coup d'état that brought Compaoré to power.

The pair had been close friends and had jointly seized power in 1983.

Sankara remains a hero for many across Africa because of his anti-imperialist stance and austere lifestyle.

After seizing power at the age of just 33, the Marxist revolutionary known by some as "Africa's Che Guevara", campaigned against corruption and oversaw huge increases in education and health spending.

The prosecution said Sankara was lured to his death at a meeting of the ruling National Revolutionary Council.

He was shot in the chest at least seven times, according to ballistics experts who testified during the trial.

BBC West Africa correspondent Lalla Sy says the verdict was greeted by applause in the courtroom following the six-month trial that came after years of campaigning for justice by his family and supporters.

Sankara's widow, Mariam Sankara, who attended the trial throughout, said the verdict represented "justice and truth" after a 35-year wait.

"Our goal was for the political violence we have in Burkina Faso to come to end. This verdict will give many people cause for thought."

However, there is little prospect that Compaoré will serve his sentence any time soon.

He has lived in exile in Ivory Coast since he was removed from office following mass protests in 2014, and has taken up Ivorian nationality.

He previously denounced the trial by a military court as a political sham.

Ten others were also found guilty, including Compaoré's security chief Haycinthe Kafando, who was accused of leading the hit squad that killed Sankara.

He has been on the run for several years and was also tried in absentia. He too received a life sentence.

They had both denied the charges.

Gilbert Diendéré, one of the commanders of the army during the 1987 coup and the main defendant who was actually present at the trial, was also sentenced to life. He is already serving a 20-year sentence for a coup attempt in 2015.

His lawyer described the sentence as "excessive", saying he should have been given credit for testifying at the trial, unlike those who were tried in absentia.

Eight other defendants received sentences ranging from three to 20 years, while three defendants were acquitted.

While in power, Sankara changed the name of his country from its colonial one, Upper Volta, to Burkina Faso, meaning the Land of Honest People.

He cut his own salary, and that of top civil servants, and sold off a range of luxury cars.

During his four years in power, he promoted pan-Africanism, self-sufficiency, real independence from former colonial power France and gender equality, by banning female circumcision and polygamy.

However, his critics point to alleged human rights abuses against his opponents.

Activists in several African countries still pay tribute to him, saying they want to continue his legacy.

In 2019, a six-metre (16ft) statue of him was erected in the Burkina Faso capital, Ouagadougou.