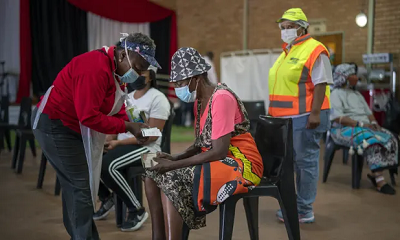 Covid cases in South Africa have surged by 255% in the past seven days but there is mounting anecdotal evidence that infections with the Omicron variant are provoking milder symptoms than in previous waves.

Covid cases in South Africa have surged by 255% in the past seven days but there is mounting anecdotal evidence that infections with the Omicron variant are provoking milder symptoms than in previous waves.

According to a South African private healthcare provider, the recent rise in infections – which includes the Omicron and Delta variants – has been accompanied by a much smaller increase in admissions to intensive care beds, echoing an earlier report from the country’s National Institute for Communicable Disease (NICD).

On Thursday, Marco Cavaleri, the head of biological threats to health and vaccines strategy at the European Medicines Agency, said the situation in Europe remained “extremely worrying”, primarily due to the spread of the Delta variant, while preliminary data on Omicron suggested it may be more transmissible than Delta but cases appeared to be mostly mild.

“However we need to gather more evidence to determine whether the spectrum of disease severity caused by Omicron is different to that of all the variants that have been circulating so far,” Cavaleri said. “Only time will tell.”

He said it appeared that the currently approved Covid vaccines were considerably less effective in neutralising Omicron, but “we need to gather a more precise picture around the level of immunity that can be retained”.

South Africa’s president, Cyril Ramaphosa, has said that despite the global concern over Omicron, it was still unclear whether it was more transmissible or caused more severe disease, and he criticised western countries for imposing a travel ban on the country.

“Having personally seen many of our patients across our Gauteng hospitals, their symptoms are far milder than anything we experienced during the first three waves,” Netcare’s Richard Friedland told the Daily Maverick on Wednesday.

“Approximately 90% of Covid-19 patients currently in our hospitals require no form of oxygen therapy and are considered incidental cases. If this trend continues, it would appear that, with a few exceptions of those requiring tertiary care, the fourth wave can be adequately treated at a primary care level.”

Friedland said that in previous waves 26% of Netcare’s Covid patients were treated in high care and intensive care units.

Friedland’s comments echo earlier analysis from Dr Fareed Abdullah, of the South African Medical Research Council, who said many of the patients diagnosed with Covid in hospitals in badly hit Gauteng province and elsewhere were often “incidental” identifications in patients presenting with other conditions.

“The main observation that we have made over the last two weeks is that the majority of patients in the Covid wards have not been oxygen dependent. Sars-CoV-2 has been an incidental finding in patients that were admitted to the hospital for another medical, surgical or obstetric reason,” Abdullah said.

“A snapshot of 42 patients in the ward on 2 December reveals that 29 (70%) are not oxygen dependent. These patients are saturating well on room air and do not present with any respiratory symptoms. A significant early finding in this analysis is the much shorter average length of stay of 2.8 days for patients admitted to the Covid wards over the last two weeks, compared to an average length of stay of 8.5 days for the past 18 months.”

South African and other experts have said it is still too early in the Omicron outbreak to determine the longer-term course of the illness, and the younger population profile of South Africa means other countries may not necessarily see the same public health outcomes.

South Africa has struggled at times with initially distinguishing between Covid variants, with some testing equipment unable to quickly spot Omicron without sequencing.