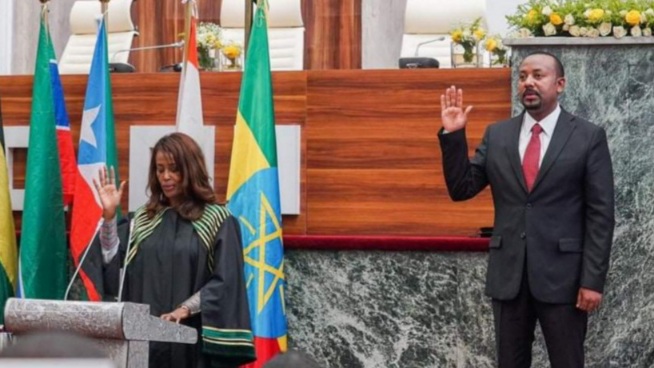 Ethiopian Prime Minister Abiy Ahmed was sworn in Monday for a second five-year term running a country in the grip of a nearly year-long war against Tigray forces he described as “hateful” toward the nation, while a handful of visiting African leaders urged him to hold things together.

Ethiopian Prime Minister Abiy Ahmed was sworn in Monday for a second five-year term running a country in the grip of a nearly year-long war against Tigray forces he described as “hateful” toward the nation, while a handful of visiting African leaders urged him to hold things together.

The Tigray conflict “has made us pay a heavy price,” Abiy told a crowd in the capital, Addis Ababa. And he bristled at international pressure as concerns grow over the war’s human toll, saying “there are those who showed us their true friendship and those who betrayed us.” He didn’t name names.

Abiy’s Prosperity Party was declared the winner of parliamentary elections earlier this year in a vote criticized and at times boycotted by opposition parties, but described by some outside electoral observers as better run than those in the past.

The prime minister, the 2019 Nobel Peace Prize winner for restoring ties with neighboring Eritrea and for pursuing sweeping political reforms, now faces major challenges as war in the Tigray region spreads into other parts of the country, deadly ethnic violence continues and watchdogs warn that repressive government practices are on the return.

Abiy said the country will start an “inclusive national dialogue that includes everyone who believes in a roundtable discussion,” led by Ethiopians.

The 11-month war is weakening Ethiopia’s economy, once one of Africa’s fastest-growing, and threatening to isolate Abiy, once seen as a regional peacemaker. Six African heads of state — from Nigeria, Senegal, Uganda and neighboring Somalia, Djibouti, Kenya and South Sudan — attended Monday’s ceremony.

“Today, more than ever before, we hope to see an Ethiopian nation that is at peace with itself,” Djibouti’s president, Ismail Omar Guelleh, told the crowd. “We all know how fragile peace is in our region. ... We remain certain that the Ethiopian nation is bigger and stronger than whatever ails her.”

Kenyan President Uhuru Kenyatta added that “Ethiopia is our mother. If our mother is not at peace, neither can the family be at peace.”

Eritrean President Isaias Afwerki, in a message shared by his information minister, expressed hope that the trajectory of his country and Ethiopia “will be further enhanced and consolidated ... in spite of efforts by negative external forces of regression.” The president, who has never allowed national elections since independence from Ethiopia, didn’t attend Monday’s events.

Ethiopia’s government last week faced condemnation from the United Nations, the United States and several European nations after it expelled seven U.N. officials it accused of supporting the Tigray forces who have been battling Ethiopian and allied forces.

The government is under growing pressure as people begin to starve to death in Tigray under what the U.N. has called a “de facto humanitarian blockade.” Last week the U.N. humanitarian chief told The Associated Press that the situation in Ethiopia is a “stain on our conscience.”

The U.S. has threatened further sanctions if humanitarian access to Tigray isn’t granted soon and the warring sides don’t take steps toward peace. Thousands of people have been killed in the war waged between the Tigray forces who once dominated the national government and Ethiopian and allied forces.

As Abiy faces another term, “I think it will give the government the chance to renew its commitment to reform and to enhance the human rights situation in the country,” Amnesty International researcher Fisseha Tekle told The Associated Press. “They have a parliament which is dominated by one ruling party, so if they have the commitment, they also have the opportunity to do that.”

The results of a joint investigation into the conflict by the U.N. human rights office and the government-created Ethiopian Human Rights Commission will be released on Nov. 1, a few days before the war’s one-year mark.