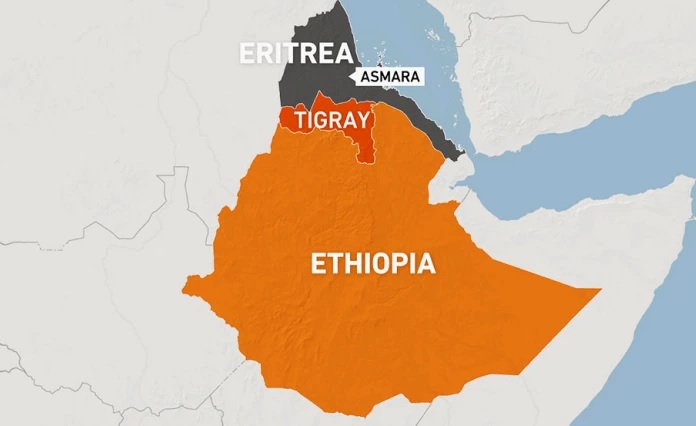 Map of Ethiopa and Eritrea. (Image/Aljazeera)

The Treasury Department said in a statement that it is sanctioning Filipos Woldeyohannes, the chief of staff of the Eritrean Defense Forces (EDF), accusing the forces of carrying out abuses in Tigray.

The Treasury Department said the EDF engaged in “despicable acts” in Tigray, including "massacres, looting and sexual assaults."

"The EDF have purposely shot civilians in the street and carried out systematic house-to-house searches, executing men and boys, and have forcibly evicted Tigrayan families from their residences and taken over their houses and property," it said.

U.S. Secretary of State Antony Blinken said in a separate statement Monday, "The United States will continue to identify and pursue action against those involved in serious human rights abuse in Ethiopia and prolonging the ongoing conflict and humanitarian crisis."

"Eritrea calls on the U.S. administration to bring the case to an independent adjudication if it indeed has facts to prove its false allegations," the ministry said in a statement.

Both Ethiopia and Eritrea denied for months that Eritrean troops were also in the region. Eritrea later acknowledged their presence, but denied they were involved in human rights abuses.

Tigrayan forces retook the regional capital Mekele in June, forcing a withdrawal of some Eritrean troops from the region. However, Blinken said in his statement Monday, “the United States is concerned that large numbers of EDF have reentered Ethiopia, after withdrawing in June.”

Some information in this report came from the Associated Press, Reuters and Agence France-Presse.