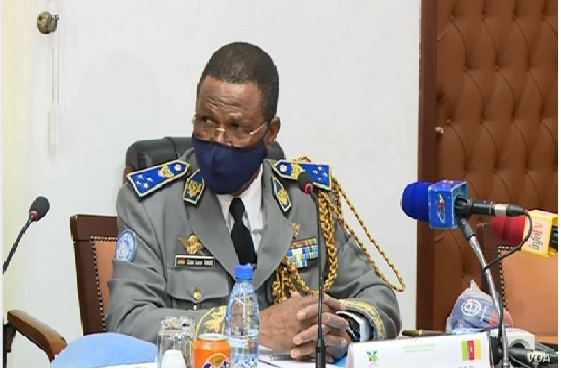 The commander of U.N. peacekeeping forces in the Central African Republic says rebels there continue to challenge authorities and threaten neighboring countries like Cameroon. General Daniel Sidiki Troare made the comments during a weekend visit to Cameroon for talks with defense officials.

The commander of U.N. peacekeeping forces in the Central African Republic says rebels there continue to challenge authorities and threaten neighboring countries like Cameroon. General Daniel Sidiki Troare made the comments during a weekend visit to Cameroon for talks with defense officials.

He said the fundamental objective of the U.N. peacekeeping mission is to protect civilians, U.N. Mission staff and offices, the country’s state institutions and restore definitive peace is facing lots of challenges. He says he is visiting Cameroon because more cooperation is needed between U.N. troops and Cameroon’s military to stop rebel advances and bring back order to the C.A.R.

Troare spoke in Cameroon where he was visiting as the head of a MINUSCA delegation. MINUSCA reports that since August 1, it documented 18 incidents of abuse and cases of human rights violations perpetrated by rebels. Thirty victims of the abuses are receiving psychosocial care in Bangui.

In July, another 20 people reported abuses in the C.A.R. capital Bangui. More than 25 C.A.R. communities suffered bloody attacks from rebels.

MINUSCA reports that in July, 5,500 wounded civilians received health assistance in its hospitals.

Assomo said Cameroon will be sending 800 troops to the C.A.R. in September because Cameroon faces insecurity when attacks occur in C.A.R. He said when rebels block the road linking Cameroon’s coastal commercial city Douala and Bangui, economic activity declines and thousands of transporters are deprived of their source of livelihoods.

Assomo said since December when post-election violence erupted in the Central African Republic, rebels have blocked the road linking Douala to Bangui at least six times. He said the number of people displaced within the C.A.R. rose from 300,000 in December to 500,000 in July. Assomo however said that many of the displaced have returned to safe localities.

Assomo and Troare did not say where in the C.A.R. that Cameroon’s troops will be deployed. But Assomo said they will be expected to secure the border. He said Cameroon has deployed several hundred additional troops to its eastern border to stop rebels from entering Cameroon.

Violence in the C.A.R. degenerated into an armed conflict in 2014 when a coalition of armed groups known as the Seleka overthrew then-President Francoise Bozize.

Cameroon shares a 900-kilometer boundary with the Central African Republic and hosts 300,000 refugees from the neighboring country.