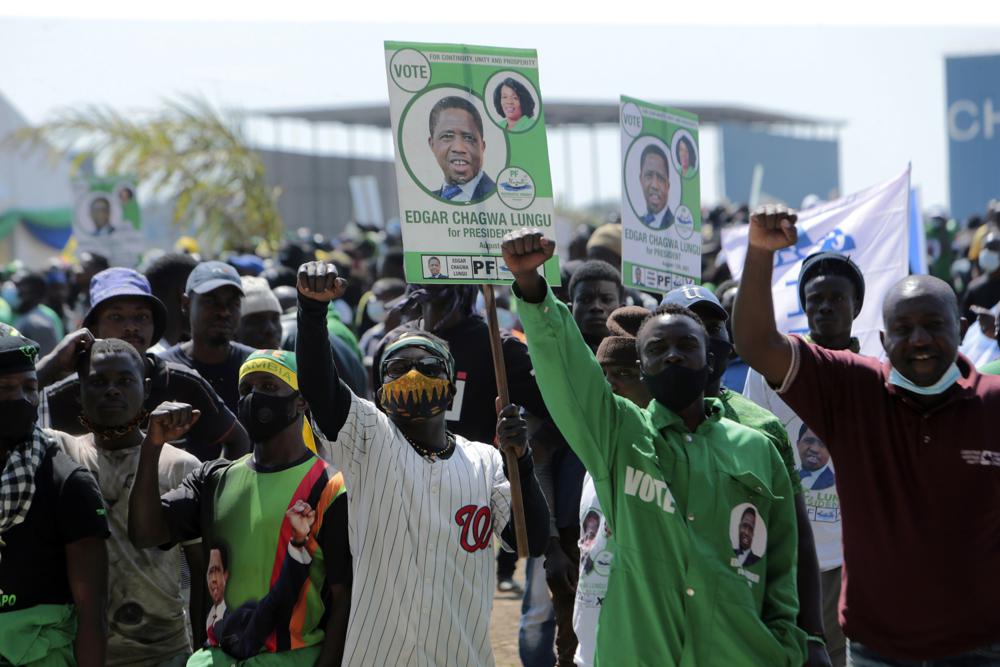 Zambians voted in general elections Thursday after a tense campaign dominated by economic woes, a debt crisis and the impact of the coronavirus pandemic.

Zambians voted in general elections Thursday after a tense campaign dominated by economic woes, a debt crisis and the impact of the coronavirus pandemic.

Sixteen presidential candidates are vying for the top job, but the frontrunners are incumbent Edgar Lungu, 64, and long-time rival Hakainde Hichilema, a business tycoon, who are facing off at the polls for the third time.

VOA’s Peter Clottey, who is in the capital city, said voter participation has been high. “You would not believe it, there is a massive turnout across Lusaka. The lines were so long. People told me they slept at the polling stations so they would be among the first to vote.”

“It's been smooth so far,” he said. “I spoke with some poll observers, including the African Union poll observers who were at the grounds, and they told me it was peaceful. I interacted with a former president of Tanzania, who is head of the Commonwealth of Nations poll observers, he also told me, briefly, from what they have witnessed so far, it has been peaceful, and the process has been smooth.”

Voting shortly after polls opened at 6 a.m. local time, Lungu voiced confidence he would retain the job he has held for the past six years.

"We are winning, otherwise I wouldn't have been in the race if we were not winning; we are a winning team," the upbeat Lungu told reporters outside a nursery school in Chawama, a poor Lusaka neighborhood.

A flagging economy and rising living costs, however, have eroded his support base in recent years, surveys suggest, and the election could be even tighter than 2016 polls when he narrowly eked out a victory over Hichilema.

Hichilema, 59, who is running for a sixth time, is backed by an alliance of 10 parties.

Lungu, a lawyer by training, is accused of borrowing unsustainably, particularly from Chinese creditors, to finance a spree of infrastructure projects. Under him, Zambia became the first African country to default on its sovereign debt since the coronavirus pandemic began, while inflation soared to 24.6 percent in June, the highest rate in more than a decade.

Africa's second-largest producer of copper after the Democratic Republic of Congo, and the eighth biggest producer in the world, Zambia missed another debt repayment earlier this year.

Winding queues of hundreds of people formed before dawn outside polling stations, hours before voting was due to open around densely populated and working-class neighborhoods of Lusaka.

Almost midway through the voting day in central Lusaka's popular Mtendere township, hundreds of voters patiently waited for their turn to cast ballots, chatting away or sucking on flavored lollies (popsicles), sold by a roving vendor.

The atmosphere was relaxed and festive, with nearby taverns serving beer while music blasted from cars driving in heavy traffic on bumpy roads.

Copper miner Thomas Wandu, 41, had been in line for seven hours to vote for Lungu.

"Underground, things are not how they are supposed to be," he told Agence France-Presse, referring to what he described as low and delayed wages by his Chinese employers.

Lungu's critics point to the high cost of living, joblessness and widespread poverty.

In Chamawa township, unemployed schoolteacher Ernest Chimba, 35, was "hoping for change ... because the cost of living in Zambia has gone really high."

Tensions flared in the run-up to polling in this southern African country of 17 million people.

Supporters of Lungu's Patriotic Front (PF) and those backing Hichilema's United Party for National Development (UPND) clashed in the run-up to voting, prompting Lungu to order an unprecedented deployment of the army.

The president also has grown tough on dissent since he took power in 2015, raising concerns of heavy-handedness if results are contested.

About 7 million citizens are registered to vote for president, legislators and local government representatives.

The winning candidate must acquire more than 50 percent of the vote to win outright. Analysts say a runoff, which would be within 37 days of the first round, is unlikely.

Lungu is confident of garnering half-a-million votes more than Hichilema, who is pinning his hopes of clinching the presidency on dissatisfaction with Lungu's handling of the economy.

The opposition has accused the government of seeking to rig the ballot — allegations the PF has rejected.

United Nations chief Antonio Guterres is "closely" following the vote and called on all candidates "to do their part to create an environment conducive to credible, inclusive and peaceful elections," spokesman Stephane Dujarric said.

Analysts fear tensions could flare after the vote.

There are "likely to be contestations on the results that may catalyze some unrest, especially in the urban areas of Lusaka and the Copperbelt," said Patience Mususa, of the Nordic Africa Institute.

Polls were set to close at 6:00 p.m. local time at more than 12,000 voting stations spread across the vast country. Official results are expected by Sunday.